DOWNTOWN — "So what's your connection to Holland?" asked the woman in the orange baseball cap with the word "Holland" emblazoned across the front.

It was 5:30 p.m. Tuesday and I had just joined a group of mostly Dutch expats waiting outside the Chicago Cultural Center. We were there for one reason: a glimpse of the Netherlands' King Willem-Alexander and Queen Maxima before they made their way inside to attend a dinner in their honor, part of the pair's whirlwind two-day visit to the city. 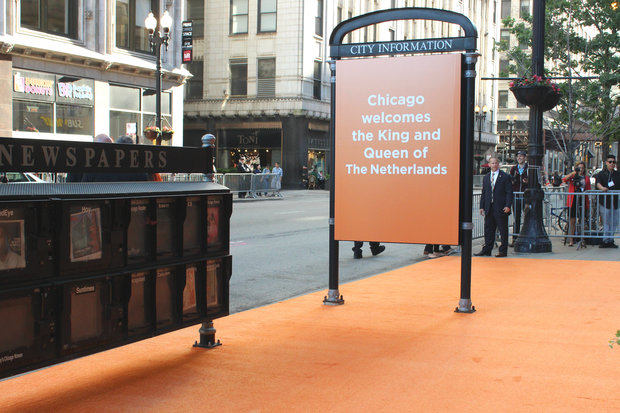 My view for nearly 90 minutes: the orange carpet outside the Cultural Center [All photos DNAinfo/Patty Wetli]

Orange, a hue I realized my wardrobe is utterly devoid of, was the color of the day, even though the Dutch flag is red, white and blue.

My new BFF Lotte —  who I would stand shoulder to shoulder with for the next hour and a half, crushed against a barricade on Washington Street — explained that the royals come from the House of Orange, with William of Orange being the "father of the fatherland."

History is a colorful thing, people.

Dutchclubchicago.com, which seemed to have the inside track on the evening's itinerary, had pegged the royal couple's arrival at 6:30 p.m., though rumors swirled that Max and Wax might actually appear closer to 6.

Plastic wrap was peeled away from the ceremonial orange carpet laid out on the sidewalk in front of the Cultural Center, the street was swept curbside and men in suits carrying walkie-talkies scurried to and fro. A helicopter hovered overhead, leading some to jokingly speculate that the royals were about to parachute down.

Mayor Rahm Emanuel materialized seemingly out of nowhere, dressed in a blue suit and, natch, orange tie. It was a far less formal look than the tuxedos and evening gowns worn to a 1982 ball celebrating a visit from Willem-Alexander's mother Beatrix. (Check out then-Mayor Jane Byrne's pouffy taffeta confection in this archival photo — '80s fashions were a friend to no one.) 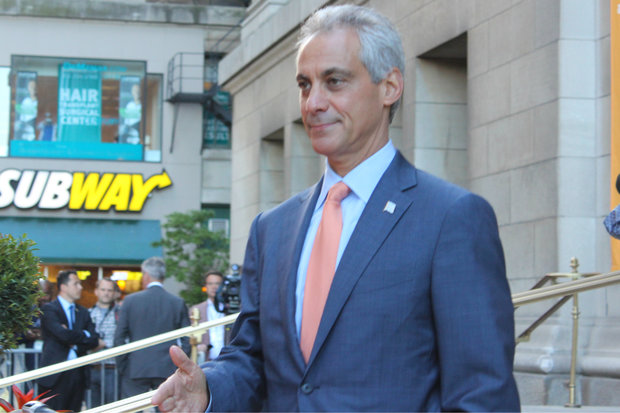 Mayor Rahm Emanuel got the orange memo. Not the hand we were waiting to shake.

"Are you going to greet them in Dutch?" a woman yelled as the mayor walked over to shake hands.

"I'm going to stick with what I know — 'Shalom,' " Emanuel replied.

Every large black SUV that passed drew our attention. "Is that them?"

I realized Chicagoans drive a lot of black Chevy Blazers.

Guests began to arrive, none of them famous.

"That's not orange," Lotte said of one woman's salmon-colored get-up.

Whether the crowd was growing restless or not, I couldn't say, as nearly all the chatter was in Dutch, a language I found completely unintelligble except for words like "email."

I drew my compatriots out in English sporadically.

Everyone agreed that everyone loves Maxima (which they pronounce Max-EE-ma) and that she's done wonders for Wax's image.

One woman recalled Beatrix' '82 visit and pointed to her now-grown daughter, who had handed the then-queen a bouquet of flowers on that earlier occasion. (Beatrix abdicated in favor of her son in 2013.)

Lotte told me she had watched Max and Wax's wedding in 2012 as a 12-year-old, waking up at 6 a.m. to tune into the festivities with her grandmother, which prompted an older woman standing nearby to say she had been among Amsterdam's throngs at Beatrix' wedding in 1966.

The smoke bomb thrown at the royal couple's wedding carriage back then was "overblown" by the media, she insisted.

A gaggle of youngsters from the Tul(i)p School for Dutch language swarmed Washington Street in advance of a performance for the royals. The mayor and his wife Amy Rule took up their official reception posts on the lower steps of the Cultural Center.

Four police motorcycles roared up the street, leading the way for the royal motorcade.

The black SUV pulled up on the opposite side of the street — aarrgghhh! — and then there they were, Max and Wax, the tips of their heads barely visible over the expletive Tulip School crowd.

After the slow build of the previous 90 minutes, the next five passed in a blur. Cliche, I know, but true.

Max and Wax smiling through what had to be the gazillionth children's song and dance they've witnessed. Max and Wax shaking hands and making small talk just out of view behind a lamp post — curse the city's obsession with illumination. Max and Wax posing with Rahm and Amy in front of a bank of photographers, their backs to us. 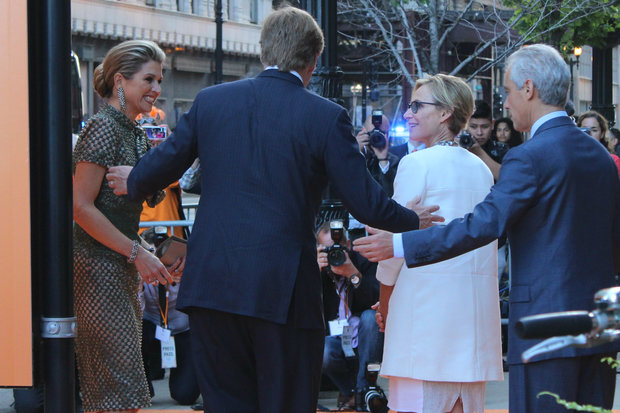 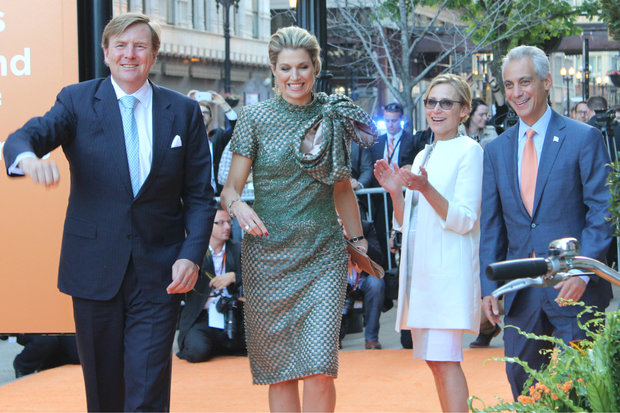 And then, improbably, Maxima, queen of the Netherlands, was striding straight toward me and my brain turned to mush. 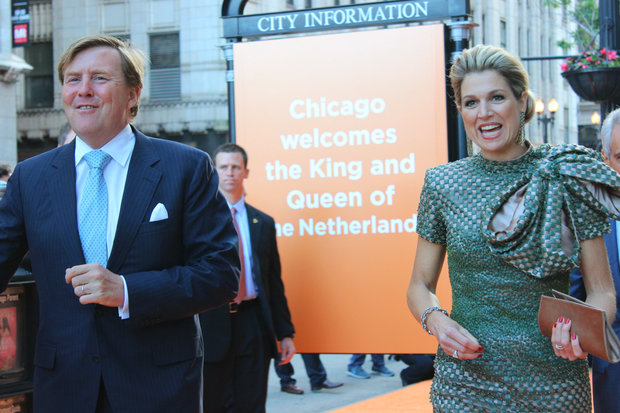 Her diamond and emerald (real, fake?) earrings swung as she turned her head. Her impossibly glamorous green cocktail dress shimmered in the dusk. 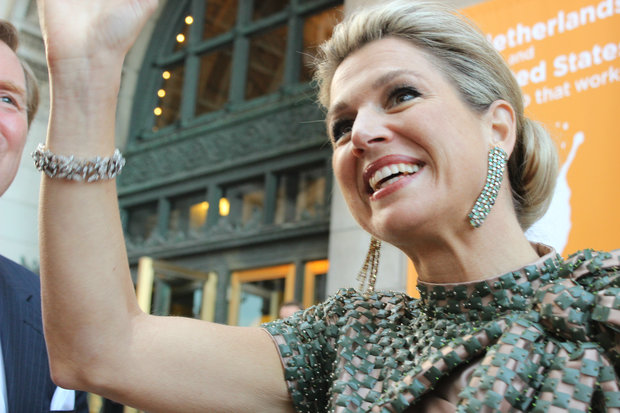 Our hands met. I was momentarily terror-stricken that she would address me in Dutch, and I would have to admit I had waited to meet her — an hour and half, crushed behind a barricade — for no good reason other than she's pretty and sparkly. 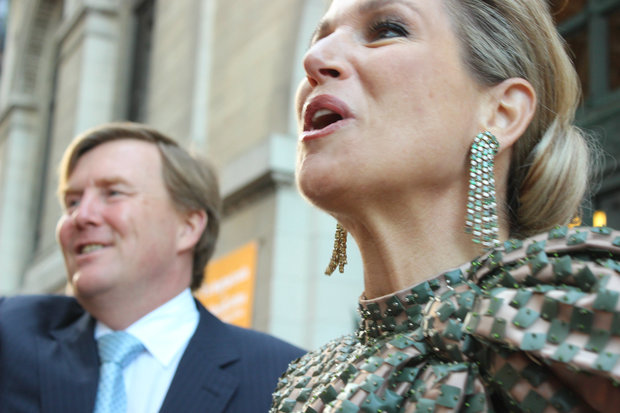 But she had already moved on to my neighbor and now the mayor was in front of me and sorry, dude, you're blocking my view of Max.

Then she was gone, swept inside, but not before turning to give us/me a final wave. 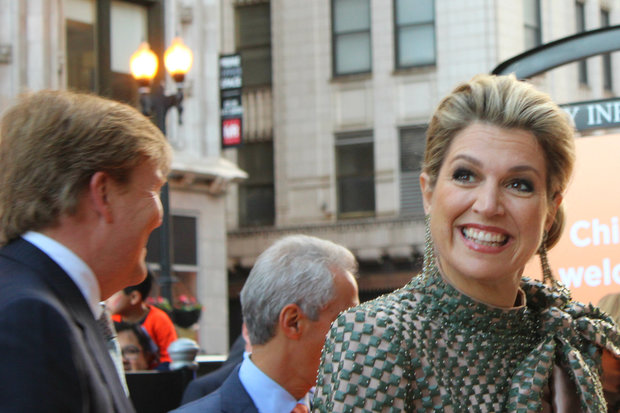 The royal couple continues their visit Wednesday with stops including the Rehabilitation Institute of Chicago, Gotham greens rooftop greenhouse, Gwendolyn Brooks College Prep and an urban picnic in Pullman. 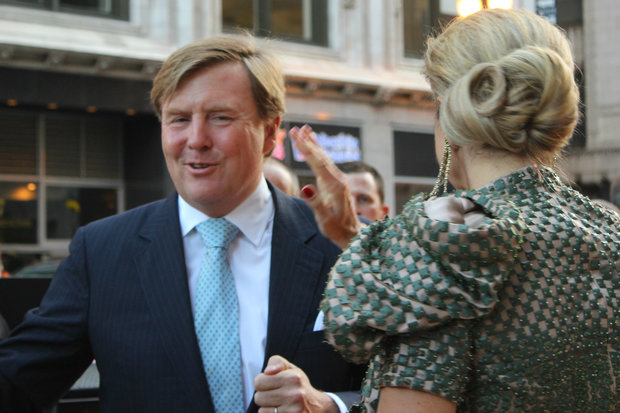 To be fair, King Willem-Alexander is kind of a big deal too. He's the first Dutch king, or "koning," since 1890 following a string of reigning queens.