GOLD COAST — A Gold Coast museum devoted to one of society's oldest professions has a new, 23-year-old curator.

Collin Pressler has been leading the International Museum of Surgical Science, 1524 N. Lake Shore Drive, for about three weeks. An Arizona native who graduated from the School of the Art Institute of Chicago in late 2013, Pressler is now tasked with developing new exhibits and programming at the surgical history museum, which is housed in a landmarked Lake Shore Drive mansion.

"There are ways to talk about surgical science using a shared language: art as research," said Pressler, a Printers Row resident. "What can science borrow from art and what art can borrow from science? I think there are people interested in that intersection who don't even know it yet." 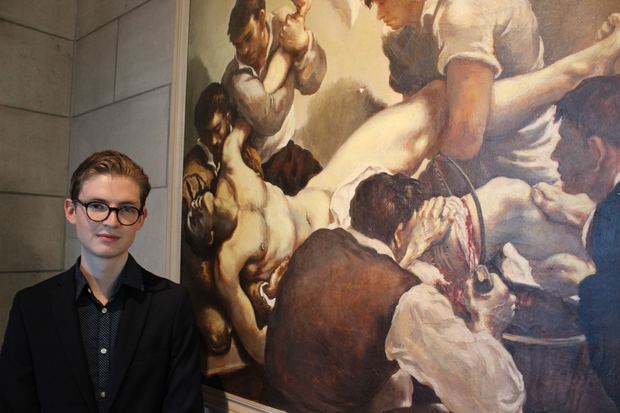 Pressler near a painting of an early amputation. [DNAinfo/David Matthews]

To illustrate the point, the museum is full of artists' depictions of surgeries gone awry, Renaissance-era physicians burned at the stake for their views, as well as dozens of used amputation kits. The museum's collection often doesn't correspond to its stately environs, but Pressler said he likes "to play with that dysjunction."

"The history of science is an imperfect one. I'm not a revisionist by any means," Pressler said. "I believe we can take some of the more problematic moments in history and present them as such. That's a teaching moment." 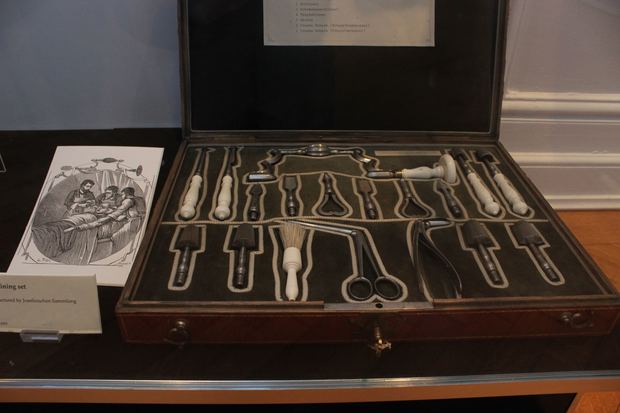 A toolkit for trephining, or the practice of boring a hole in the skull to relieve the patient of headaches, demonic spirits or other perceived ails. [DNAinfo/David Matthews]

The four-floor museum also has space for rotating exhibits on the body by contemporary artists, including current artist-in-residence Vesna Jovanovic. An art history major who studied the human body, Pressler said he aims to expand this program under his watch.

"I want this to be a resource open to artists who have research-based work," he said.

Other Pressler initiatives in the works include new exhibits on wound healing, 16th-Century anatomist Andreas Vesalius, and cardiology, given the first open heart surgery was performed by a black doctor in Chicago. Pressler is one of just three full-time employees at the Gold Coast museum, but said he is supported by a "healthy body of interns."

"For me, surgical science presents a fascinating paradox: that all bodies are the same and there's a standard for normalcy," Pressler said. "Though in the same hand by showcasing these anomalies and breaks with normalcy, it alludes to the vast differences between people." 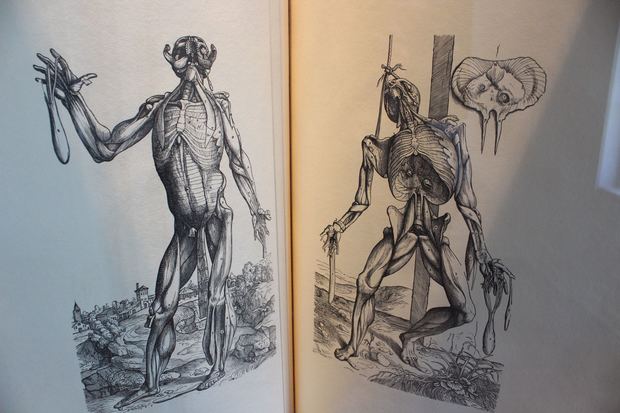 Drawings in The Fabrica, a 16th-Century collection of books on anatomy by Andreas Vesalius. [DNAinfo/David Matthews]

Pressler arrives at the museum from the School of the Art Institute, where he was an exhibition manager and curated exhibits with hundreds of pieces. It's this experience that Pressler points to when asked about his age, and leading a Downtown museum about 1½ years out of school. If he chose to study surgery himself, he'd barely be old enough for medical school.

"It's not daunting. I look at the scale of this institution itself as an exciting challenge," Pressler said. "I'm constantly learning."

The museum is open from 10 a.m.-4 p.m. Tuesdays to Fridays and 10 a.m.-5 p.m. weekends. Admission is free on Tuesdays, and otherwise $15 for adult non-members; $10 for students, senior citizens and members of the military; and $7 for children ages 4 to 13. Children 3 and under get free admission.

More Development Coming To Lawrence, Weigh In At Community Meeting