MICHIGAN AVENUE — The Art Institute of Chicago's latest exhibit will feature a never-before-seen sculpture deemed too nude for New York.

The sculpture called "Huck and Jim" is part of the "Charles Ray: Sculpture, 1997-2014" exhibit that will open to the public Friday at the Art Institute, 111 S. Michigan Ave.

In unprecedented fashion, the Art Institute cleared the second floor of its modern wing to make way for the exhibit, which will feature 17 pieces by the Chicago-born sculptor. Perhaps its most important sculpture is "Huck and Jim," a fiberglass depiction of the Adventures of Huckleberry Finn protagonists, nude. 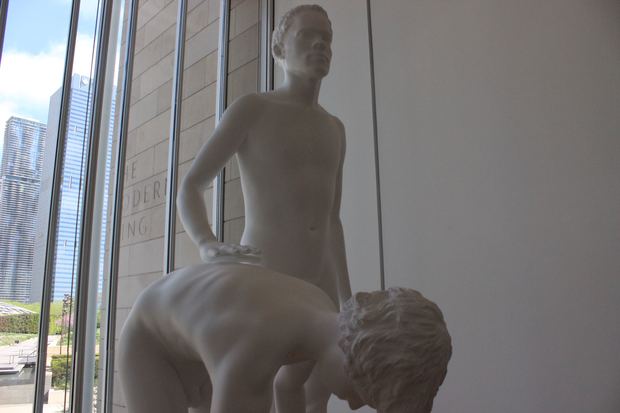 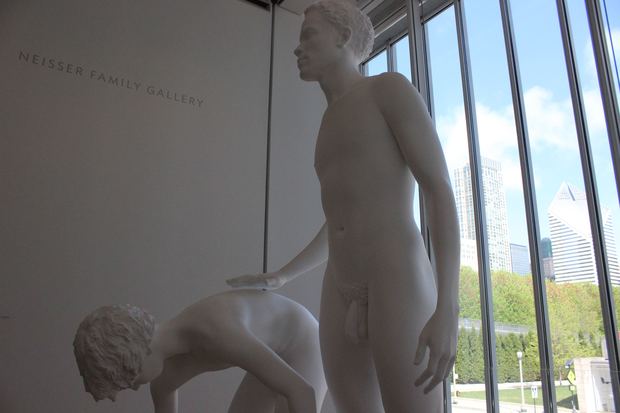 Ray was commissioned by the Whitney Museum of American Art in New York to build the sculpture, which would have been included in the new Whitney Museum's public plaza. Ray began working on the piece in 2009, but in 2010 was told by Whitney officials it could not be placed outside because passersby would see full-frontal male genitalia. Ultimately, "with enormous sadness, the Whitney declined the sculpture" outright, according to The New Yorker.

"Huck and Jim," featuring human figures at 150 percent of life size, is inspired by the scenes in the classic Mark Twain novel where the adolescent Huckleberry Finn and Jim, an adult runaway slave, traverse the South on a raft, meandering down the Mississippi River.

The Art Institute said that the figures are nude, not only as an allusion to a state of nature (a more tense, ambiguous paradise like the Garden of Eden), but also because young Huck said in the book, "We was always naked, day and night ... besides I didn't go much on clothes, nohow."

Ray sculpted Huck bending over as he scoops up frog eggs, a metaphor for stars and the origins of the universe.

“There’s a moment in Chapter Nineteen where Huck and Jim are on the raft at night, and they’re arguing about the stars. Jim says the stars were made, and Huck says no, they were always there," Ray told The New Yorker. "But then Jim says the moon could have laid them, and that sounds plausible to Huck, ‘because I’ve seen a frog lay most as many.’ That was the genesis of the piece.”

Art Institute spokeswoman Amanda Hicks said Ray and James Rondeau, the museum's curator of contemporary art, worked at length to identify the most important and compelling pieces to include in the exhibit. "Huck and Jim," which will greet exhibit guests entering or leaving the Modern Wing, is one of four Ray pieces in the exhibit that have never before been shown to the public.

Hicks said no concerns were raised by the Art Institute's board or trustees about including the piece, which is "capturing the important issues of race and boyhood, [and] what it means to be an American."

"This is a reflection of how seriously we take our legacy with regard to contemporary art," Hicks added. "We've always been focused on art of all times and art of the moment."

The Charles Ray exhibit opens to the public Friday. The Art Institute is open daily from 10:30 to 5 p.m. daily, except for Thursdays, when it is open till 8 p.m.