Some Speed Cameras Are Racking Up Millions, While Others Issue Few Tickets

FOREST GLEN — More than 180 times a day, a speed camera on Cicero Avenue on the Northwest Side nabs speeders — a rate higher than any other camera in the city.

But Downtown, a camera at 18 W. Superior St. issued just 133 tickets since it went live a year ago.

DNAinfo Chicago analyzed the tickets issued by the city's 146 cameras now spread around town. The tickets from the start of the program until April 2 show a huge range in the number of speeders nabbed by each camera on a daily basis.

In fact, just 21 of those cameras — which are placed within 1/8 of a mile of parks or schools — spit out a majority of the nearly $58 million in fines that have enriched the city's coffers since 2013.

The most productive camera can ring up more than $7,000 in fines a day, on average.

The busiest cameras tend to be on stretches where drivers feel comfortable letting loose. The top four revenue-producing cameras, for example, are found on long stretches of open road, sometimes near expressways or industrial areas, with little cross traffic.

The busiest 21 cameras are spread across the city, with 11 on the South Side, seven on the North Side and three on the West Side.

Click here to for a breakdown of speed camera citations in your neighborhood.

Meanwhile, at least 15 cameras issued a mere five or fewer tickets a day. Two of those are in congested areas Downtown, and issued just 675 total tickets combined in the past year.

And many neighborhoods — including Back of the Yards, Bronzeville, Edison Park, Englewood, Rogers Park and Logan Square — still don't have any speed cameras at all.

• Be on the lookout this month: More speeders have gotten nabbed in May (160,000) than any other month since the camera program began.

The data analyzed by DNAinfo Chicago includes warnings that are issued to drivers the first time they are caught speeding.

The city ordinance authorizing the speed cameras in the city stipulates drivers traveling 6-10 mph over the posted limit be fined $35. Violators traveling 11 mph over are slapped with a $100 ticket. But so far the city is only issuing tickets to drivers going 10 mph or more over the limit.

The speed cameras planted near parks are active when the parks are open, generally from 6 a.m. to 11 p.m. daily and have a 30 mph speed limit.

In school zones, the cameras are on from 7 a.m to 7 p.m. Monday through Friday when school is in session. The speed limit differs from 20 to 30 mph, depending on if children are present in the area.

The most lucrative camera in the city, in Washington Park, is located along a winding street in the neighborhood's namesake park. On a daily basis, it is nearly as productive as the one on Cicero, but it has been active much longer: Since January of last year, the camera has issued $3.13 million in fines.

To Ald. Willie Cochran (20th), "those kinds of fines is absolutely a travesty," he said.

"People who come through that park are being burdened by the fines that are being imposed upon them," said Cochran, who has gotten three tickets from that same camera.

He said it should be removed.

"I don't think that speed camera should be left in that park penalizing people in that park. There's no proof that it increases safety and stops traffic accidents," he said.

The city, however, says drivers are slowing down near the cameras.

"Available data shows that speed cameras do achieve our goal of reducing speeding," Michael Claffey, a spokesman for the Chicago Department of Transportation, said in a statement.

There is a 31 percent reduction in speeding violations when comparing speeding rates during the first month of a camera's life to the next six months, Claffey said.

"Drivers who speed are not only breaking the law, they are putting their own lives and the lives of others in danger," Claffey said.

Still, residents are skeptical of the placement of some of the cameras. The camera located at 4909 N. Cicero Ave., neighbors say, is there to generate revenue more than improve safety.

"It's so bogus. Why is this here?" said Alissa Gaeth, 43, who uses the road to get from her home to Mariano's. "It’s totally opportunistic. ... It's a moneymaker."

Gaeth said the section of Cicero was designed "like a highway," with homes facing side streets to the west and the Edens Expressway to the east. There is little cross traffic.

"I know I'm breaking the law going a few miles over the speed limit, but most people on Cicero are going with the flow of traffic," she said. "It's not like they’re going 80; they’re going 30 or 40."

So far, she said, she has been ticketed "at least" three times at the section of Cicero, which has a 30 mph speed limit. 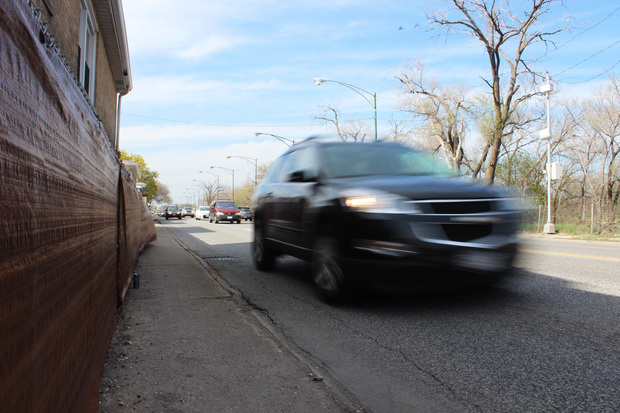 The speed camera on Cicero Avenue near Ashmore Playlot issues the most tickets per day on average. [Ben Woodard/DNAinfo]

"Sometimes I'm scared to come home to check my mail; I know what the envelope looks like," she said. "Hey, that's a lot of Starbucks I could be getting, but no, it's going to the city of Chicago."

Resident Guido Nardini, 42, of Mayfair, said he has Gaeth beat after racking up eight or nine tickets — "some ungodly number" — between him and his wife at the Cicero camera.

"All the taxpayers in Chicago should be thanking me that their property taxes aren't going up," he said.

Ald. John Arena (45th) said the city never consulted him about the placement of the camera near a sliver of a park called Ashmore Playlot, which is actually not located on Cicero but on a one-way side street, tucked behind a Lawrence Avenue car wash.

"This idea that the cameras were put in to reduce speeds around parks and schools is a noble concept," said Arena, who was among the aldermen advocating for a three-year plan to remove all red-light and speed cameras in the city. "The problem here is that it can't be argued that a child is going to fall out of this park and fall into Cicero Avenue or Lawrence. It’s just not plausible." 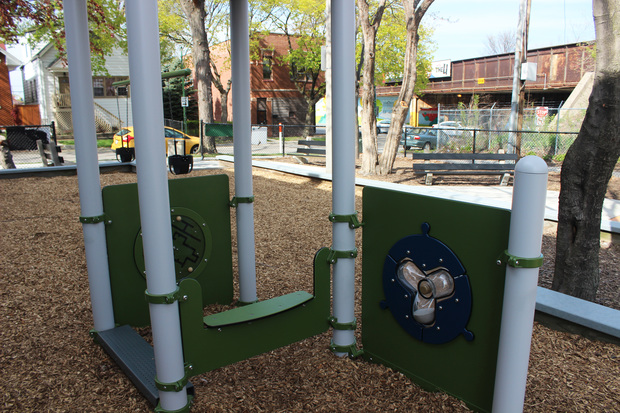 A sliver of Cicero Avenue can be seen from Ashmore Playlot. [DNAinfo/Ben Woodard]

He said the camera was installed before the park got a big facelift. Before, it was largely forgotten.

"The community residents would never let their kids play in there," he said. "So we cleaned it up."

He said residents have never raised the issue of speeders on Cicero when talking about the park.

Arena said there were other areas in his ward that could use the camera, such as on the "race track" that Nagle Avenue has become. No matter where the cameras are in the city, he said, there needs to be more signs and warnings painted on the street warning drivers of the cameras.

CDOT says the park safety zone surrounding Ashmore Playlot was ranked the 94th most dangerous out of more than 1,500 zones throughout the city with four bike and pedestrian crashes, three serious or fatal crashes, 35 crashes involving kids and 84 involving speeding, according to crash data.

The city says the safety zone surrounding Washington Park has been even more hazardous, ranking third most dangerous out of zones citywide, including 60 bike and pedestrian injury crashes, 42 serious or fatal crashes, 189 crashes involving kids and 298 crashes involving excessive speed.

'Are They Reducing Speeding?'

"When the city first started the speed cameras some of their initial sites saw a big drop in just the first three weeks," said Burke, of the Active Transportation Alliance. "For us, that's the most salient question: Are they reducing speeding? And we know that speed contributes to crashes."

Burke said speed limit enforcement was one of several important factors in reducing traffic crashes, and in Chicago there has historically been little of it.

"We have so little enforcement of traffic laws outside of the cameras," he said. "That's partly a function of not having enough police to do it."

Other important factors include street design and education.

Nonetheless, he said, any type of speed enforcement program should be transparent and consistent.

Burke, an avid bicyclist, said Chicagoans need to slow down to save lives — and he even recommends moving cameras around the city to make them less predictable.

Still, Cochran and Washington Park Advisory Council President Cecilia Butler are skeptical the cameras in their community are helping.

"You have people who are speeding up to avoid people who are slowing down," Butler said. Morgan Drive, home to top revenue generating camera, is "already a difficult road to drive on, if you are unfamiliar. This makes it more unsafe."

She said to her the camera was installed in a spot that doesn't make much sense.

"No one crosses [the street] there, yet it is there," she said.

Cochran, like Arena, said some areas are better than others for speed cameras.

Still, the alderman says there is not much even he nor others can do when caught on camera speeding by parks and schools.

Read about the cameras in your 'hood here:

What Your Favorite 'L' Seat Says About You: See If Your Seat Is in Demand

Future Looks Bleak For Cabbies As Rides Dip 41%: 'The Worst It's Ever Been'

Check Out The Bacteria Levels At Your Favorite Beach

Graffiti Is Everywhere, But Some Neighborhoods Hate It More Than Others

With Carjackings Up This Year, Police Tell Drivers To Avoid Fighting Back