All Aboard! Ravenswood Metra Station to Open for Monday's Commute

RAVENSWOOD — The long temporary-platform nightmare at the Ravenswood Metra stop is about to come to an end for riders.

At least on the outbound side.

As of Monday, May 11, the brand new west-side platform and station will be open to commuters, following a track switch-over that will get underway Friday night and last through Sunday.

"It's a big piece of the economic engine we're trying to build on Lawrence Avenue," he said. "It's a real anchor for this corner and part of the reason Mariano's works so well. Metra drives a huge amount of foot traffic."

It's been almost five years since Metra announced plans for a new station at Ravenswood and nearly three years since ground was broken at the Lawrence Avenue site.

Metra officials initially projected that the Ravenswood station would open in May 2014, an estimate they then pushed back to November — a deadline that also came and went.

The station has long been completed, leading riders to wonder why they were still shunted to the uncovered temporary platform. The short answer is track work and last year's polar vortex, which put a crimp in the track's construction schedule by freezing equipment solid.

"There were a lot of challenges," said Don Orseno, Metra executive director and CEO. "We would have liked to have finished last year." 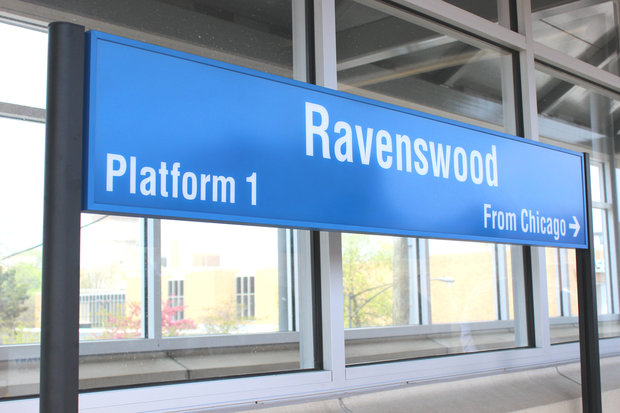 It's been almost five years since Metra announced plans for a new station at Ravenswood. The outbound platform opens Monday. [DNAinfo/Patty Wetli]

The opening of the station represents the end of Phase 1 of a multi-year project in which Metra has rebuilt bridges from Balmoral Avenue on the north to Grace Street on the south — 11 bridges total — while simultaneously constructing the station at Lawrence and Ravenswood avenues.

The first phase focused solely on the west side of the tracks, meaning that only the west station will be ready for commuters come Monday.

The east-side station, which will mirror the west side, won't be completed until late 2017 or early 2018, according to Metra officials.