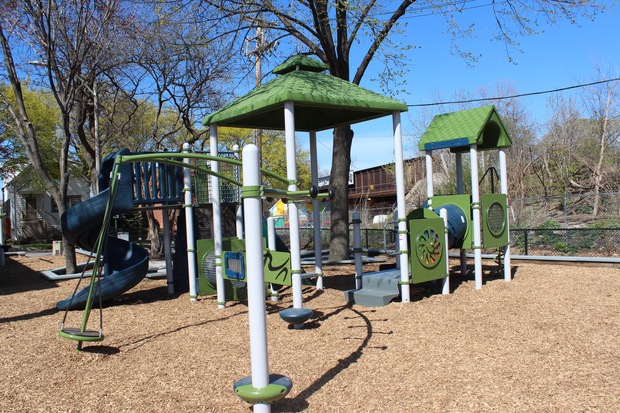 A sliver of Cicero Avenue can be seen from Ashmore Playlot. [DNAinfo/Heather Cherone]

FOREST GLEN — Two Northwest Side speed cameras have rung up $2.05 million in fines since city officials flipped them on, according to data obtained by DNAinfo Chicago.

The cameras, near Portage Park — 5454 W. Irving Park Road — and Ashmore Playlot Park — 4909 N. Cicero Ave. — were installed by the city and issue $35 tickets to those caught going exactly 10 mph over the posted limit and $100 for 11 mph or more over the speed limit. First-time offenders get a warning.

In all, 12 speed cameras on the Far Northwest Side have raked in $4.57 million in the approximately 18 months most have been operating, according to city data.

The speed camera near Ashmore Playlot, 4807 W. Gunnison St., has issued the most violations per day of any camera in Chicago, according to city data obtained through the Freedom of Information Act.

There several other locations where a speed camera would do much more good than the one near the sliver of a park that is Ashmore Playlot, located on a one-way side street behind a Lawrence Avenue car wash, Ald. John Arena (45th) said.

"This idea that the cameras were put in to reduce speeds around parks and schools is a noble concept," Arena said. "The problem here is that it can't be argued that a child is going to fall out of this park and fall into Cicero Avenue or Lawrence. It's just not plausible."

The Forest Glen camera catches motorists whizzing up and down a stretch of Cicero Avenue that serves as an alternate route around the gridlock that frequently builds north and south along the Edens Expressway from the junction with the Kennedy Expressway.

It has issued $1.1 million in fines in the 18 months it has been operating, according to city data.

That works out to about 180 violations issued every day, according to city data. 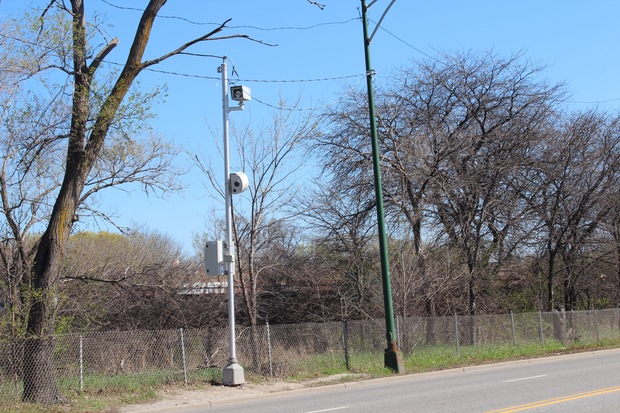 The speed camera in the 4900 Block of Cicero Avenue, near Ashmore Playlot. [DNAinfo/Heather Cherone]

The area around Ashmore Playlot ranks as one of the most dangerous areas in Chicago, said Mike Claffey, a spokesman for the Chicago Department of Transportation. From 2009-12, there were four bike and pedestrian crashes, three serious or fatal crashes, 35 crashes involving children or teens, and 84 were caused by speeding drivers, according to city records.

The cameras have been successful in forcing drivers to slow down, Claffey said.

"Drivers who speed are not only breaking the law, they are putting their own lives and the lives of others in danger," Claffey said.

Guido Nardini, 42, said he and his wife have gotten eight or nine tickets — an "ungodly number," he said — from the camera at 4909 N. Cicero Ave.

"All the taxpayers in Chicago should be thanking me that their property taxes aren't going up," Nardini said.

The camera alongside Portage Park's namesake park at 5454 W. Irving Park Road slapped motorists with $958,000 in fines, coming in second among the 12 cameras on the Far Northwest Side for total fines issued, according to city data.

Those cameras — which brought in a combined $1.17 million in fines — had the support of Ald. Tim Cullerton (38th), who credited them with slowing traffic near the park.

A third camera near Merrimac Park in Dunning at 6226 W. Irving Park Road rung up approximately $652,000 in fines, according to the data.

Two cameras on the north and south sides of Jefferson Memorial Park — at 5471 W. Higgins Ave. and 5432 W. Lawrence Ave. — issued fines totaling approximately $592,000, according to the data.

Before they were installed in March 2014, Arena objected to the locations of those cameras, saying there were better ways to get lead-footed drivers to slow down.

A frequent critic of the cameras, Arena said they are designed to fill the city's coffers, not make the roads safer.

A third Jefferson Park speed camera at 4831 W. Lawrence Ave. near Thuis Playlot issued $386,000 in fines. That stretch of Lawrence Avenue leads to the Kennedy Expressway.

There are 146 speed cameras issuing tickets in the city, according to data, through April 2.

Here are all the stories looking at speed camera data across Chicago's neighborhoods.