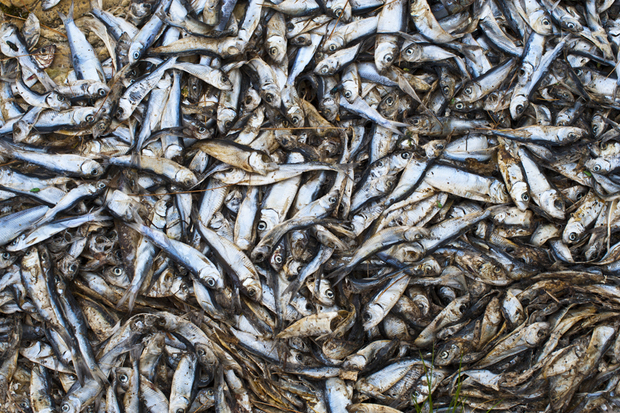 One billion pounds of dead alewives were pulled from Lake Michigan in 1967. [Shutterstock]

HYDE PARK — Lake Michigan’s salmon population could be on the verge of a cataclysmic collapse because the largest bioengineering experiment in the history of the Great Lakes has run wildly out of control, biologists say.

Biologists are struggling to figure out how to save Chinook salmon with the sudden decrease of their main food source, the herring-like alewife, a fish that a previous generation of biologists spent 66 years trying to obliterate from the lake.

“They’re at pretty close to all-time low levels,” said Randall Claramunt, a fisheries biologist with the Michigan Department of Natural Resources, as he ran down the alewife population numbers since the fish first entered the Great Lakes in 1949.

Claramunt and other biologists said the alewife population must reproduce in large numbers in July or the population could collapse, taking with it the Chinook salmon — also known as King salmon — whose diet is almost exclusively the silvery 10-inch fish.

“We are in a make-or-break year,” Claramunt said. “If we don’t see it, it doesn’t matter what else happens.”

The number of Chinook salmon in Lake Michigan already has fallen by half in just two years, down to 4.2 million in 2014 from 8.4 million in 2012, according to estimates by state and federal agencies.

In a sense, the salmon are victims of their own success in cutting the alewife population.

Even as the salmon numbers fall, officials are encouraging anglers to catch more and cutting the number of salmon stocked in the lake to the lowest levels since 1970. That way, the alewives have a chance to bounce back.

But for Chicagoans who remember the fish as possibly the worst pestilence to ever hit the city, the efforts to save the alewives are bittersweet. 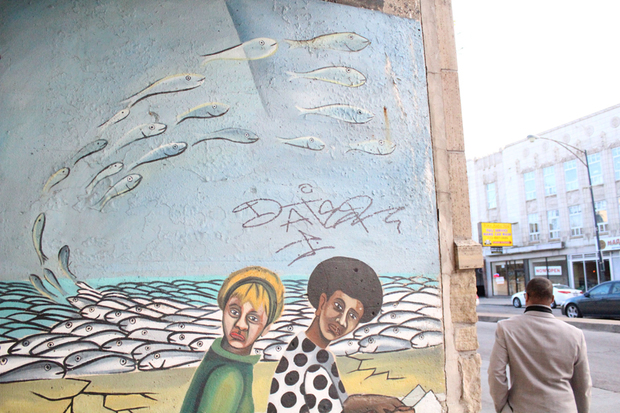 "Alewives and Mercury Fish," a 1972 mural by Albert Zeno on 55th Street and Lake Park Avenue in Hyde Park depicts the plague of the alewives that struck the city in 1967. [DNAinfo/Sam Cholke]

Alewives entered the lake through the Welland Canal around Niagara Falls from the Atlantic Ocean in 1949 and were firmly established in Lake Michigan and Lake Huron by the '60s.

In the late '60s, the population of alewives, which can each produce 7,500 offspring, spiked in the polluted waters of Lake Michigan, feeding off a bevy of small crustaceans that are now nearly extinct.

Then disaster struck, and the alewives were slaughtered en masse by a sudden bloom of toxic blue-green algae near Gary in 1967.

Sam Cholke discusses how this problem escalated so rapidly:

One billion pounds of dead fish were pulled from the lake in the summer of 1967, according to news reports at the time. The beaches were choked with clouds of flies over six-foot tall mounds of dead fish that had to be hauled away to two dumps in Indiana devoted exclusively to disposing of Chicago’s dead fish.

“Driving down Lake Shore Drive with open windows was difficult,” said Carolyn Ulrich, who lived in Hyde Park, where there is a mural devoted to the alewife disaster. “The smell was awful and could make you nauseous.”

The North Side of the city had no access to clean drinking water in the summer of 1967 because the dead fish clogged the pumps in the lake, and the whole city was under an order to boil water because it was so polluted with decaying fish, according to news reports from the time.

In 1967, states around the Great Lakes agreed to launch what is still one of the largest bioengineering experiments in the world; they introduced Chinook salmon from the Pacific Ocean into the lake to eat the alewives, which bounced back in 1968.

The experiment was a success, and by 1971 the alewife population was down to tolerable levels.

It wasn’t until the early 2000s that researchers discovered the experiment had the potential to run wildly out of control. 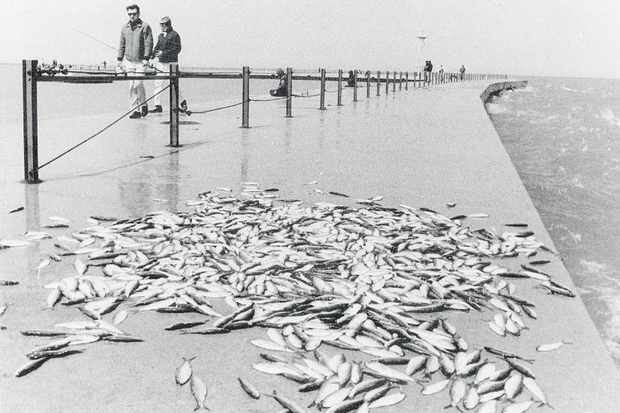 Piles of dead alewives were still washing up on Montrose Beach in 1970, but Chinook salmon significantly dropped the numbers in the following years. [Chuckman Collection Volume 16]

The experiment escapes the lab

Cavalier, who has run a charter fishing operation for 18 years on Lake Huron, said he used to rack up 1,500 Chinook salmon during the four-month season.

After two hard winters, the alewife population in Lake Huron was so anemic in 2003 that salmon, which were now breeding uncontrollably in the wild, simply ate what little was left. The next year the salmon population collapsed, leaving only skeletal salmon searching for the few straggling alewives that hadn’t  been already devoured.

He said Lake Huron now was trapped in a “predator pit,” a food web so heavy with predators at the top of the food chain that the prey fish will never recover.

Madenjian was optimistic Lake Michigan would avoid the fate of Lake Huron, but said anglers and researchers were all watching for what would happen to the alewives once the water temperature started to rise.

“It’s looking more and more like the situation in Lake Huron before the collapse,” Mandenjian said.

If Lake Michigan’s salmon population were to collapse, Chicago and other cities where Chinook salmon fishing is good business could likely weather the storm better than those on the shores of Lake Huron, where communities were ravaged by the decline in angler tourists and their families.

“We had a terrible year last year,” said Nick Ganzer, of Waukegan-North Point Sport Fishing charter fishing boats. “This year, we’re not too sure how it’s going to play out.”

In May, Ganzer will start taking anglers out to the warm waters near Chicago’s harbors in search of Chinook salmon, which are prized for their ferocity and stamina.

He said surviving the loss of salmon ultimately would hinge on how other fish like trout and bass reacted.

“If you take people out fishing, and you’re not catching fish, they’re not going to come back to you,” Ganzer said. “If that happens to all the captains, the fishing industry would collapse.”

Lake Huron is slowly recovering, but in some ports nearly 90 percent of the fishing industry was wiped out, and the remaining charter boats are surviving off anglers interested in the resurgence of native lake trout and walleyes.

Researchers are patiently waiting for July, when the alewives hatch and have just hours to find food if they are to survive.

He said there were still options — salmon stocking could be dropped to zero. But he said the failure of the alewives to produce a sizable brood for a third year in a row would constitute a disaster requiring Illinois, Michigan, Indiana and Minnesota to intervene together.

Biologists and anglers all said no one really believed it could happen in Lake Huron — until it did.

Now, there is much more cooperation as Lake Michigan fights to save the fish that was once its worst scourge.