'The Amazing Mr. Ash' and His Magic Shop Get Star Treatment at Film Fest

LINCOLN SQUARE — After driving past Ash's Magic Shop on Western Avenue more times than he could count, Brian Gersten decided to stop in and satisfy his curiosity.

"It isn't like any other store I've been inside," Gersten said. "I almost view it as like a sort of twisted 'Wizard of Oz' netherworld." 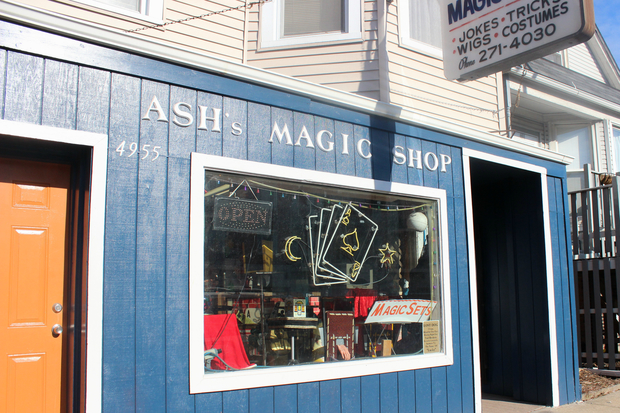 Ash's Magic Shop has been a fixture on Western Avenue since 1985. DNAinfo/Patty Wetli

The man behind the curtain, Ashod Baboorian, aka Mr. Ash., would become the subject of Gersten's short documentary "The Amazing Mr. Ash," which screens Sunday during the Chicago International Movies & Music Festival. 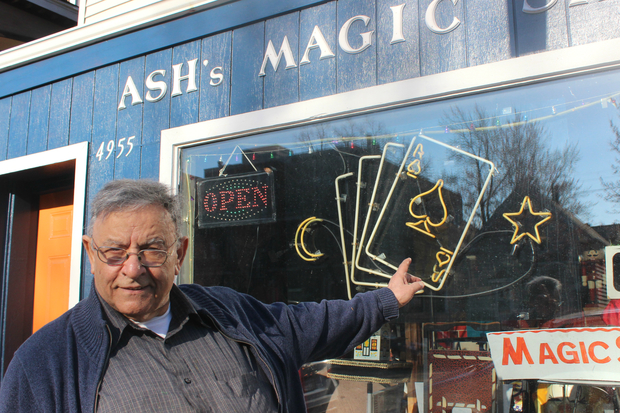 In 12 minutes, Gersten's documentary traces Ash's life story, from his childhood in Iraq as the son of Armenian refugees to his now-semi-retirement as the elder statesman of Chicago's magic scene.

Among the revelations: Despite a career that spans more than 40 years as a magician, "If he had the choice, he would want to be a country musician," Gersten said.

"Yeah," Ash confirmed in an interview with DNAinfo Chicago. "I'd give you this shop if you could make country music happen." 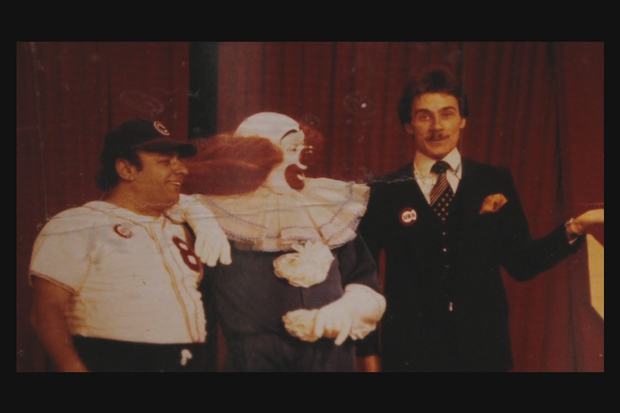 As much a character in the film is the magic shop itself, 4955 N. Western Ave., which Ash has owned and operated since 1985, and said he would gladly sell to the "first nut case" who would make him an offer.

"It's wall-to-wall with all these toys and trinkets that have been there forever," said Gersten. "It's very much part of the history of magic." 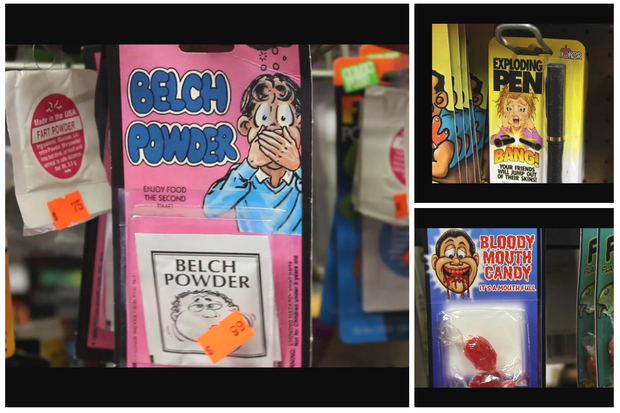 Ash's Magic Shop is stuffed to the gills with tricks and pranks. Brian Gersten

Brandon Weiss, whose father owns a business next to the magic store, recalled shopping at Ash's as a kid whenever he'd visit his dad at work.

"The special treat was to get one trick or treat from Mr. Ash," be it an exploding pen or a magic box that would make a stuffed rabbit disappear, said Weiss, who still keeps in touch with Ash.

"My dad's entire desk used to be rigged" with pranks from Mr. Ash, Weiss said.

"I have lots of happy memories in that shop," he said. "Mr. Ash is the best."

Though "The Amazing Mr. Ash" touches on Ash's heyday — 11 appearances on the Bozo Show, hobnobbing with politicians — nowadays Baboorian, 75, is more likely to perform at birthday parties or, as shown in the film, the opening of a local Dunkin' Donuts.

"I think it reflects where his career has gone," Gersten said.

Ash is the first to admit that times have changed, and so has he. 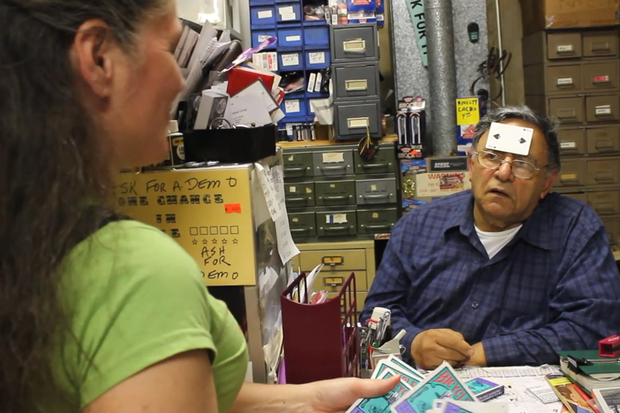 He keeps busy minding the store, which does a decent enough trade peddling gag gifts like itching powder and candy that tastes like fish. Professional magicians drop in to pick up basic supplies they need for their acts, things like trick rope or flash paper used in fire illusions.

Ash's real joy these days, he said, is his 15-month-old grandson.

"Right now, this is my fun," Ash said, pointing to the toddler, who was hanging out at the shop with his grandparents on a recent afternoon.

Ash had already taught the youngster the trick of pulling a coin from his ear, said daughter-in-law Michelle Sledge.

"He's such a loving person," she said of Ash. "His humor carries us all." 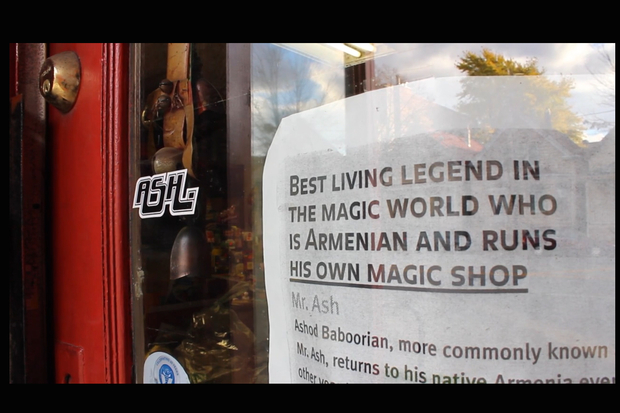 "Laughter is the best medicine," Ash says in the film.

It's how he handles more serious topics raised in the documentary, including his family's history, which receives only a passing mention.

"We had the massacre, the genocide," Ash tells Gersten of his family's Armenian roots. "That's why we were in Iraq."

"He's the sort of person who doesn't like to dwell on that stuff," said Gersten.

In fact, Ash, who was born and raised in Iraq until his family emigrated to the U.S. in 1960, has visited Armenia numerous times as an adult.

"I used to go every two years," he said. "When I went the first time I looked up all my relatives I never knew I had. I went from village to village. I met 'em all."

But it's been nearly a decade since he last made the trip.

"How many times can you see your cousin Bill," he said in typical Ash fashion. 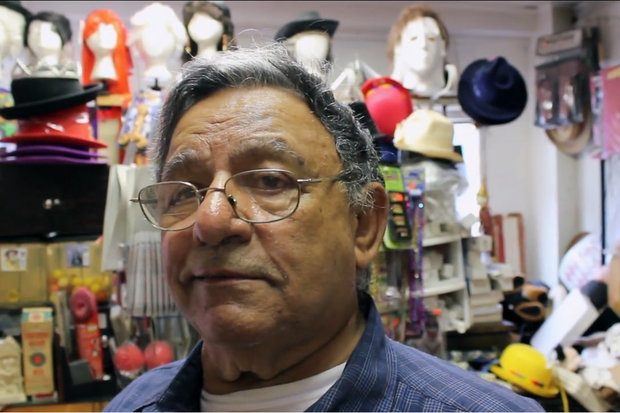 Spend even the shortest amount of time with Ash and it becomes apparent that whether his medium is magic or music, the man is simply a born entertainer.

The frequent butt of his punchlines is Bonnie Baboorian, Ash's wife of 48 years.

"The word divorce never enters my mind. Murder, yes," he says in the film.

The two met when Bonnie was 16 and Ash was 21. Both were attending the same party solo, with mutual friends who were all paired off.

For the past 46 years, they've made their home in Bowmanville, and Bonnie is a constant presence at the shop, the sassy ying to Ash's jester yang.

Ash and Gersten both plan to attend Sunday's screening of "The Amazing Mr. Ash."

Though Gersten said he showed Ash the completed documentary, Ash said he has no recollection of ever viewing the film, which was shot over the course of nearly a dozen visits.

"I haven't seen it," he told DNAinfo Chicago. "I don't remember."

"We don't even remember what we ate yesterday," chimed in Bonnie, who, for once, had the last word.