They’ve been catching the home opener together for more than 60 years.

Every April, their father — Chicago’s ultimate boss, the late Mayor Richard J. Daley — made sure his sons made it over to Comiskey Park to cheer on their favorite team at the home opener.

“My dad would never take us out of school, but he’d pick us up when class got out and take us over to the game,” Cook County Board Commissioner John Daley said.

“I still enjoy getting together with my brothers and keeping that Opening Day tradition going,” John Daley said.

Former Mayor Richard M. Daley fondly remembers that he and his three brothers would take turns sitting next to their dad, switching up after innings so that one of them got three turns in the second-best seat in the house — the same spot late President John F. Kennedy sat in when the  “Go-Go” White Sox lost to the Dodgers in the 1959 World Series.

On Friday, when they reunite for the home opener in their sweet front row seats next to the Sox dugout — almost in the exact spot as their father’s seats at Old Comiskey Park — it’ll be an especially sweet family get-together.

In addition to celebrating the 10th anniversary of the Sox 2005 World Series season, the Daley clan still is riding high from the Election Day victory of Patrick Daley Thompson, the 11th Ward’s freshly elected alderman.

“With the election behind us, a great victory for Patrick … we’re really going to enjoy this one,” John Daley said. “Doesn’t hurt [that] the Sox look like they got a chance to be pretty good this year.”

When I asked the County Board commissioner if he or his brothers might give up a seat on Opening Day for the new alderman in the family, he chuckled.

“Maybe,” he said, pausing a bit. “You know, Patrick is the next generation," which by his inflection I understood as a polite way to say Bridgeport’s new ward boss might be out of luck.

Thompson, who grew up next door to his famous grandfather’s house on Lowe Street that he now calls his own home, says for most of his life his favorite summer escape has been the short walk down 35th Street to catch a Sox game.

“My brother and I spent a lot of time going to games. My grandma would call and say, ‘I’ve got tickets,' and we’d run over to get them and head to the game with friends. It was so fun,” Thompson said.

Being Mayor Daley’s grandson had its perks, too.

During some White Sox home stands, Thompson’s famous grandfather would have a couple dozen balls signed by the visiting team and pass them out to grandkids who didn’t realize how special those souvenirs would be someday.

“We had these autographed balls from famous Yankees like Thurman Munson and Catfish Hunter … and take them down to Donovan Park to play ball, and we’d lose them when someone hit a home run, or all the names would get scuffed off,” Thompson said. “We didn’t have an appreciation for the importance of autographs.”

Thompson especially remembers a trip to Comiskey with his grandfather and uncle John on July 4, 1976 — and not because the Sox beat the Rangers. 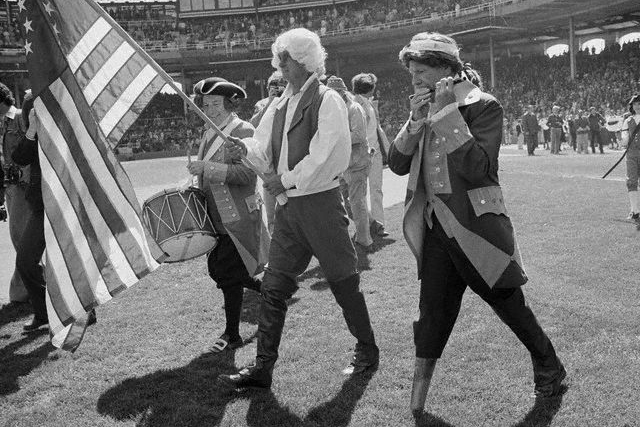 “There was a tribute to the [U.S.] bicentennial and there was [Sox owner] Bill Veeck, who had that wooden leg, dressed up as a revolutionary war flute player,” Thompson said.

“Nobody knew it was him, but he was out there, and there was a great picture of him marching with his wooden leg on. I’ll never forget that one.”

Of course, there was no bigger year than 2005, when Thompson — like a lot of superstitious Sox fans — really believed that his presence at playoff games helped the team make that amazing championship run.

“I have this White Sox hockey jersey, and when I would wear it they would win. So, I’d bring it with me to the World Series games, but not wear it, and when things weren’t going well, people in my section would tell me to put it on, and they’d come back to win,” he said.

“It was all superstition. We’d have people over before the game, and we’d all touch the flagpole in the front yard when we’d walk to the park. … I thought, ‘It’s me. I’m the reason.’”

These days, Thompson says he gets to about 25 games a year, sometimes more, and hasn’t missed a home opener since April 13, 1992 — the day of the Great Chicago Flood.

“I was in property management then and managing an office that was connected to the sewers, so we were all hunkered down when that happened,” he said. “So, it’s been a few years since I missed an opener.”

After six months of campaigning and a tense runoff, it’s not crazy to think that this Opening Day would be the greatest one of all for Thompson — the cherry on top of his big election victory — when one of his proud uncles would give up their seat for the new alderman in the family.

But that’s not going to be happening.

“Actually, I’m not going to the game,” Thompson said with pain in his voice.

“It is disappointing. I’m so excited for the season and honored and excited to be the new alderman. But at the same time my family is deserving of a little r&r. It’s the tail end of my kids’ spring break, and we want to give them a little getaway. So, my first Opening Day as alderman will have to be next year.”

Thompson says he’s not too broken up about it.

Because when it comes to scoring his uncle's sweet family seats on Opening Day, the newly elected ward boss said, “The answer is no. No. That’s just the reality.”

“There’s no 'maybe.' They wouldn't give them up. They love going. Doesn’t matter that I’m alderman, they’re still my uncles, and those are their seats,” Thompson said.

“So, my first official Opening Day as alderman will have to wait until next year.”