During the six-week runoff campaign, Arena painted Chicago Police Lt. John Garrido as an ill-informed candidate unwilling — or unable — to put forward a vision for the future of the 45th Ward, while Garrido depicted Arena as a combative, divisive politician beholden to unions that have contributed hundreds of thousands of dollars to his two runs for office.

Arena said his clear-cut victory Tuesday night with 53 percent of the vote based on unofficial returns was a mandate to continue the work he started during his first term in office, which he won by beating Garrido in 2011 by just 30 votes.

"This victory is a nail in the coffin of the old way of doing things," Arena said. "We've seen glimpses of what this ward can be."

Arena praised the unions that supported his campaign and inundated residents with mailers touting his accomplishments and criticizing Garrido on a host of issues.

Arena singled out the Chicago Teachers Union, and praising the union who gave his campaign tens of thousands of dollars and the teachers who campaigned door-to-door in the last days of the runoff election.

"This win is as much yours than anyone else's," Arena said to loud cheers from CTU members at Arena's victory party at La Pena, 4212 N. Milwaukee Ave.

Arena's decisive win is a victory for CTU and the Service Employees International Union, which worked to defeat Mayor Rahm Emanuel, who was also re-elected Tuesday night.

During his first term, Arena opposed the mayor's initiatives more than any other alderman, according to a study of council votes by University of Illinois political science professor Dick Simpson.

Arena said he would work to bring the 45th Ward together after what Arena called and an "intense and rough" campaign.

Arena praised Garrido for running a "tough race, a great race" and said he would work to "get past the divisiveness" of the election. In the first round of voting, Arena won every precinct east of Central Avenue, while Garrido won all but one precinct west of Central Avenue. 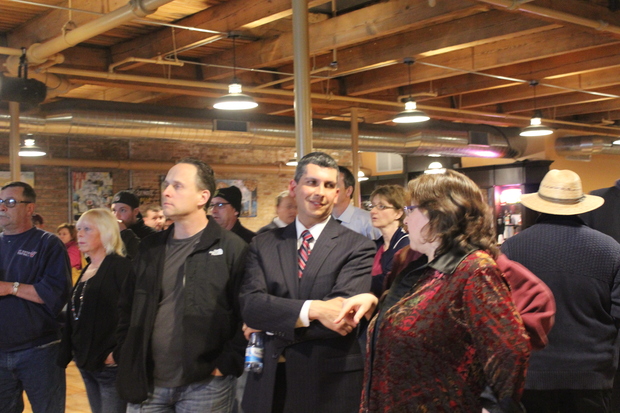 "I hope, I know we can come together," Arena said of the 45th Ward, which includes Jefferson Park and parts of Old Irving Park, Portage Park, Gladstone Park and Forest Glen.

Arena said he would reach out to the people who felt like they weren't being heard by him by going "door to door, call by call."

Garrido, who called to concede the race before 9 p.m., said he was proud of what his all-volunteer campaign accomplished despite being significantly outspent.

"I told [the alderman] I would help him bring the ward together," Garrido said. "The fighting needs to stop."

Garrido, who is also a lawyer, said ruled out a third run for alderman, but would remain active in the community as a member of the Hitch Elementary Local School Council and the Jefferson Park and Gladstone Park chambers of commerce.

"It's done," Garrido said, adding that his 2011 loss to Arena stung far more than Tuesday's defeat. "Everyone can get back to their normal life."

Garrido said he planned to sit down with Arena in the coming weeks to discuss the issues facing the ward and would urge him to focus on bringing new life to Jefferson Park and Gladstone Park.

"But first, I've got a few signs I need to take down," Garrido said, with a laugh.

Heather Cherone breaks down the results:

The candidates disagree on whether a property tax hike will be needed to fill the looming budget gap created by the city's pension crisis. Arena said it may be inevitable as a last resort, given the city's financial condition, while Garrido has ruled it out entirely.

Garrido said he would focus as alderman on basic city services, which he said Arena had failed to deliver, and do more to reduce the racket from jets using O'Hare Airport's new east-west runway.

Arena's campaign has touted the ongoing revitalization of the Six Corners Shopping District, where dozens of new businesses have opened up in the past two years after decades of what Arena called "stagnation" and "decline" as his biggest accomplishment in office.