Albany Park Tunnel Work Set for Summer, Will Flood Hit Before It's Done?

ALBANY PARK — The good news for residents of Albany Park and North Park: Work on a stormwater diversion tunnel is set to begin this summer, aimed at keeping the Chicago River contained in its banks and out of people's homes during floods.

The bad news: The tunnel won't be complete until 2017.

Details of the tunnel, until now presented to residents as largely conceptual, were shared at a pair of community meetings held last week.

At the same time, she expressed a number of concerns: "One is how emergency management can be improved while the tunnel is being constructed," particularly if Mother Nature strikes with yet another so-called "100-year" flood before the tunnel is operational, Bisnett said.

With Ald. Margaret Laurino (39th) and representatives from the Chicago Department of Transportation and the Metropolitan Water Reclamation District on hand for the presentation, residents took the opportunity to air their frustration with the city's response to previous floods in 2008 and 2013.

In 2008, sand arrived on the scene, but no bags to put it in, neighbors said.

In 2013, residents said the city had plenty of warning of the April 18 flood that saw some neighbors evacuated from their homes by boat. Weather forecasts the night before predicted a deluge of rain and a river crest over flood stage, but the city didn't dispatch resources until the morning of the 18th, when water had already breached the river's banks. 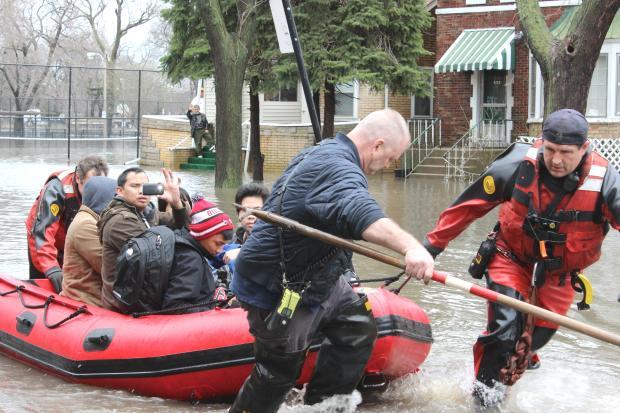 In 2013, flooding forced some residents to be evacuated by boat. DNAinfo/Patty Wetli

Her office, she said, meets with police, fire, the Park District, the transportation and water departments and the Office of Emergency Management and Communications to "make sure we've checked off all those boxes."

Though long-time residents of the area recalled major floods as far back as the 1950s, the issue has become more serious in recent years, with the Chicago River topping flood levels three times since 2008.

The problem stems from the fact that Albany Park and North Park are part of a 112-square-mile watershed and "we're at the low spot," according to Vasile Jurca, civil engineer and project manager for the department of transportation.

Over the years, the city explored various flood solutions, including a much-rumored wall along the river that would have displaced a number of homeowners and also would have relied on residents to manually close access "gates" along the wall, Jurca said.

The tunnel, announced in 2013, is a passive system that makes use of gravity to divert stormwater from the river, moving it downstream to an outlet shaft that spits the water into the North Shore Channel. 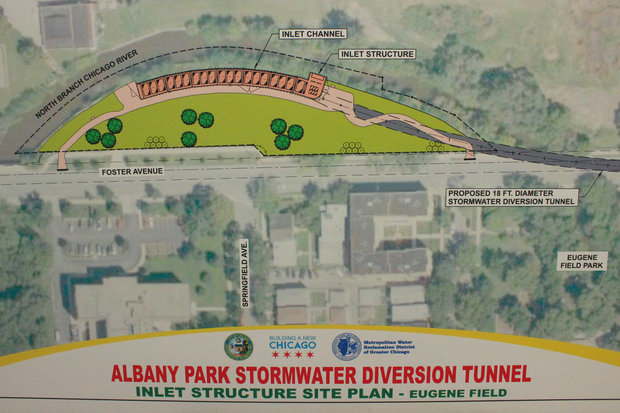 The city is about to solicit bids on the project and is in the process of obtaining necessary permits, with construction likely starting near the end of summer, Jurca said.

"This is a done deal," Dan Burke, chief engineer for the transportation department, said in response to community skepticism. "There's been a very public commitment. This project is going to be taken through to completion."

What to Expect During Construction

Though the tunnel, 18 feet in diameter, will run for a mile nearly parallel to Foster Avenue, construction will have very little, if any, impact on traffic.

That's because most of the work will occur 150 feet underground, through use of a tunnel boring machine that will chew through 50-75 feet of rock a day.

The most visible elements will be sat the tunnel's inlet and outlet shafts.

The inlet, where water will enter the tunnel, will be built on unimproved Park District land on the north side of Foster Avenue at approximately Springfield Avenue. It will be enclosed within an eight-foot-tall fence, itself eventually surrounded by landscaping.

A grate, with openings no wider than four inches, will cover the tunnel's entry point.

"Nobody will fall through," Jurca said.

The outlet shaft will be built in River Park, just east of the North Shore Channel and south of Foster Avenue. 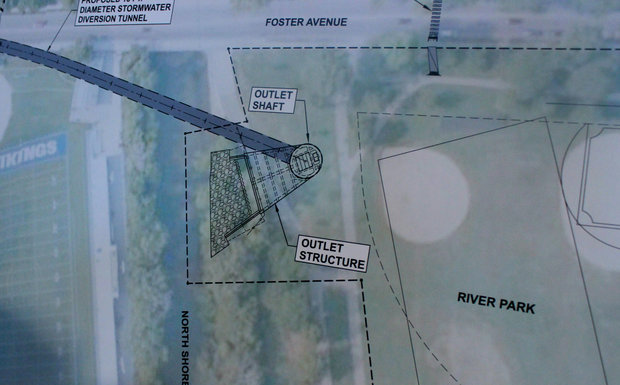 Sounds of the explosions will be as loud as fireworks and the vibration will be noticeable to neighbors, who will be warned in advance, he said.

How the Tunnel Will Work

During floods, when the river reaches a height greater than the inlet, water will fall into the shaft thanks to gravity.

"There's no button you push to activate," Jurca said.

Water will then be split between the Chicago River and the tunnel, the latter of which will carry excess water away from residential and commercial areas straight to the North Shore Channel, where it's more easily absorbed.

"A 100-year storm would not overbank the river," said Jurca.

According to the city, the tunnel has enough capacity to handle a "500-year" flood.

Once the danger of flooding has passed, any water remaining in the tunnel will be pumped out before it can become stagnant.