DUNNING — The Dunning Tax Increment Financing District, due to expire at the end of the year, should be extended for another 12 years to fund a proposed new high school near Oak Park Avenue and Irving Park Road, Ald. Tim Cullerton (38th) said.

"I hope one day there will be a school there," said Cullerton, who will retire in May.

If approved this summer by the Chicago City Council, the extension of the TIF district to 2027 could generate $60 million, according to the proposal from the city's Department of Planning and Development. The proposed budget would earmark $47 million for "public improvement and public facilities." 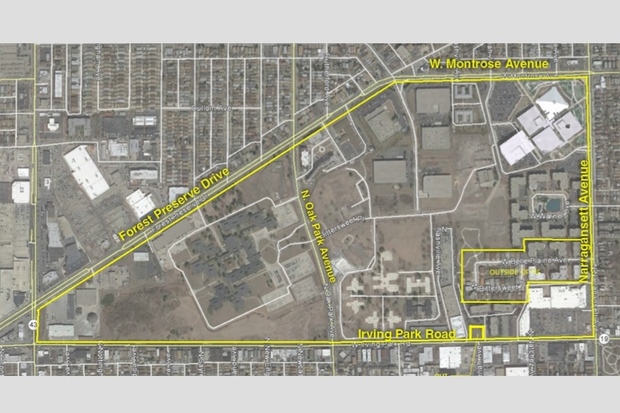 The boundaries of the Dunning TIF district would not be changed under the proposal. (City of Chicago)

A new high school — which has been a proposal without plans for years — would relieve the space crunch at Taft High School, which is the largest and most crowded public high school in Chicago,

At Taft in Norwood Park, 3,233 students go to class in a building meant for 2,184 pupils, according to data released by Chicago Public Schools officials.

The need for a new high school was a campaign issue in the 38th Ward aldermanic race, won by Ald. Nicholas Sposato (36th), with most candidates agreeing a high-quality school was needed to give families an alternative to Chicago Public Schools' selective enrollment system. A new school would boost property values and attracting families with young children, the candidates agreed.

Marc Schulman, of Eli's Cheesecake, has long advocated for an agricultural high school to be built on the largely vacant property near his headquarters. Schulman organizes a yearly job shadowing program for students at Chicago High School for Agricultural Sciences in Mount Greenwood.

The TIF district, which was established in 1991, is on the grounds of the former Chicago-Read Mental Health Center and adjacent to the Dunning-Read Conservation Area, a 23-acre oasis of wetlands and woodlands being restored to its natural state.

Work on a $70.5 million facility that will house 200 veterans who suffer from Alzheimer's Disease and dementia is underway, officials said.

The federal government is funding most of the cost of the new veterans facility in Dunning. (38th Ward Office)

Tax-increment financing districts capture all growth in the property tax base in a designated area for a set period of time, usually 20 years or more, and divert it into a special fund for projects designed to spur redevelopment and eradicate blight.

Mayor Rahm Emanuel's use of TIF funds has become a hot-button issue in the April 7 mayoral runoff, with challenger Cook County Commissioner Jesus "Chuy" Garcia pledging to reform their use.

Other projects funded by the TIF district include $1.3 million to help build the $8.5 million factory for Eli's Cheesecake and $2.9 million for the 133-unit Autumn Green senior living facility, records show.

The district typically generates about $2 million each year, and has $10.9 million on hand, according to the city's annual report for 2013, the most recent published on the city's website.

The extension has the support of the mayor's office, said Cullerton, who said he will "watch from the sidelines" to see if the extension is approved after he leaves office.

City officials are not proposing to expand the size of the TIF district, or buy any new land, according to the proposal.

Other possibilities for the 320-acre site, which has been mostly vacant after the Chicago-Read Mental Hospital closed more than 20 years ago, include new streets, the relocation of the massive salt pile and the removal of old building foundations and street improvements, according to the proposal.

The first community meeting in February to discussion the extension "went well," Cullerton said. The next hearing is set for April 10 before the Joint Review Board in Room 1003A at Chicago City Hall, 121 N. LaSalle St.

A public hearing is expected to take place May 12, with the matter scheduled to go before the Chicago Plan Commission May 21, before being presented to the Chicago City Council in June and July.