According to the mayor's press office, the state Department of Natural Resources moved late Wednesday to freeze $28 million in state grants set to go to the Chicago Park District.

Among the projects potentially affected, Mayor Rahm Emanuel's office said, was the $3 million purchase of the Magid Glove factory at 1800 N. Ridgeway Ave. intended to augment the Bloomingdale Trail, also known as the 606.

So, too, is the expansion of Walsh Park, also connected to the 2.7 mile trail.

Bloomingdale Trail officials have said when the trail opens in June, four of the 12 access points will be ground level parks, including Walsh Park at 1722 N. Ashland Ave. The former glove factory's conversion was planned to be completed later in the project.

Bloomingdale Trail officials said the freeze will not impact the opening of the trail, set for June.

"The loss of these grants would impact planned improvements for Walsh Park and the park planned for the former Magrid Glove factory site," said Beth White, director of the Chicago Region office of The Trust for Public Land, the city's private partner charged with managing the project.

"We understand the due dilligence project. But we feel confident that, once the state has done the research on the positive impact of these kinds of investments, they'll restore these dollars promptly," White said.

The frozen dollars were funding next phase improvements at Walsh Park, which include a wheel-friendly event plaza, new playground equipment, a water spray feature, and a fitness zone, according to a statement. 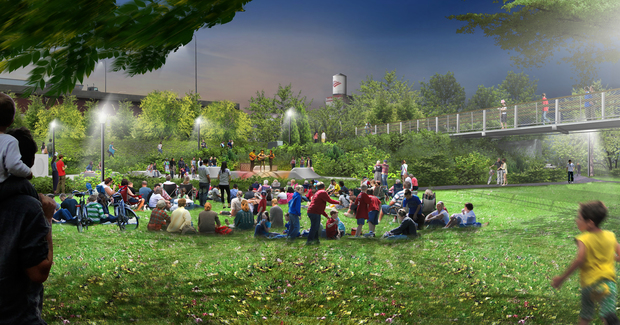 Emanuel, in a statement, said the "Chicago Park District and I have worked to enhance the quality of life in Chicago by providing safe and inviting parks and facilities and to create a park system that prioritizes the needs of children and families.

"Gov. Rauner's decision to suspend grants for new parks across Chicago and the rest of the state will hurt every child who wants to swing on a swing set or play on the monkey bars," Emanuel said.

Emanuel called the governor's decision "a slight to every parent who wants their child to have a safe, community-oriented place to enjoy."

He said it jeopardized funding for 27 projects at 25 parks, adding, "Gov. Rauner's decision to freeze park projects undercuts the tremendous progress we've made in Chicago to create a brighter, healthier future for children in every Chicago neighborhood."

Rauner issued a statement blaming Democrats in the General Assembly in that they "knowingly voted for a budget that intentionally left our state with a $1.6 billion hole."

He added, "The child-care assistance program is already out of state money, and state prisons soon won’t have funds to make payroll. As a result, the governor’s budget office is taking actions necessary to address the fiscal crisis that the governor inherited."

According to Rauner, the state "has asked all affected communities to hold on construction and stop incurring costs if construction has started."

According to the mayor's press office, parks receiving state grants affected by the freeze include: