LINCOLN SQUARE — Voting often isn't really an option but Chicagoans can cast their ballot early in advance of the Feb. 24 municipal elections.

The city has 51 designated early voting sites. Registered voters can avail themselves of any of these polling places, which will be open through Feb. 21, 9 a.m. to 5 p.m., Monday through Friday.

We've put together a quick guide on neighborhood voting sites and candidates running for alderman in the 33rd, 39th, 40th and 47th wards.

Mell was appointed alderman in 2013, succeeding her father Dick Mell. She has focused on identifying problem buildings in the ward and pursuing the owners in housing court.

Wanat works as a nonprofit consultant and is a former Peace Corps volunteer. Fluent in multiple languages, Wanat has emphasized the need to reach out to the ward's non-English speakers.

DNAinfo.com's coverage of the ward's candidate forum can be found here.

The candidates' responses to questions posed by the Sun-Times editorial board: Meegan's responses, Mell's responses and Wanat's responses.

Responses to a questionnaire from the Tribune: Meegan, Mell and Wanat. 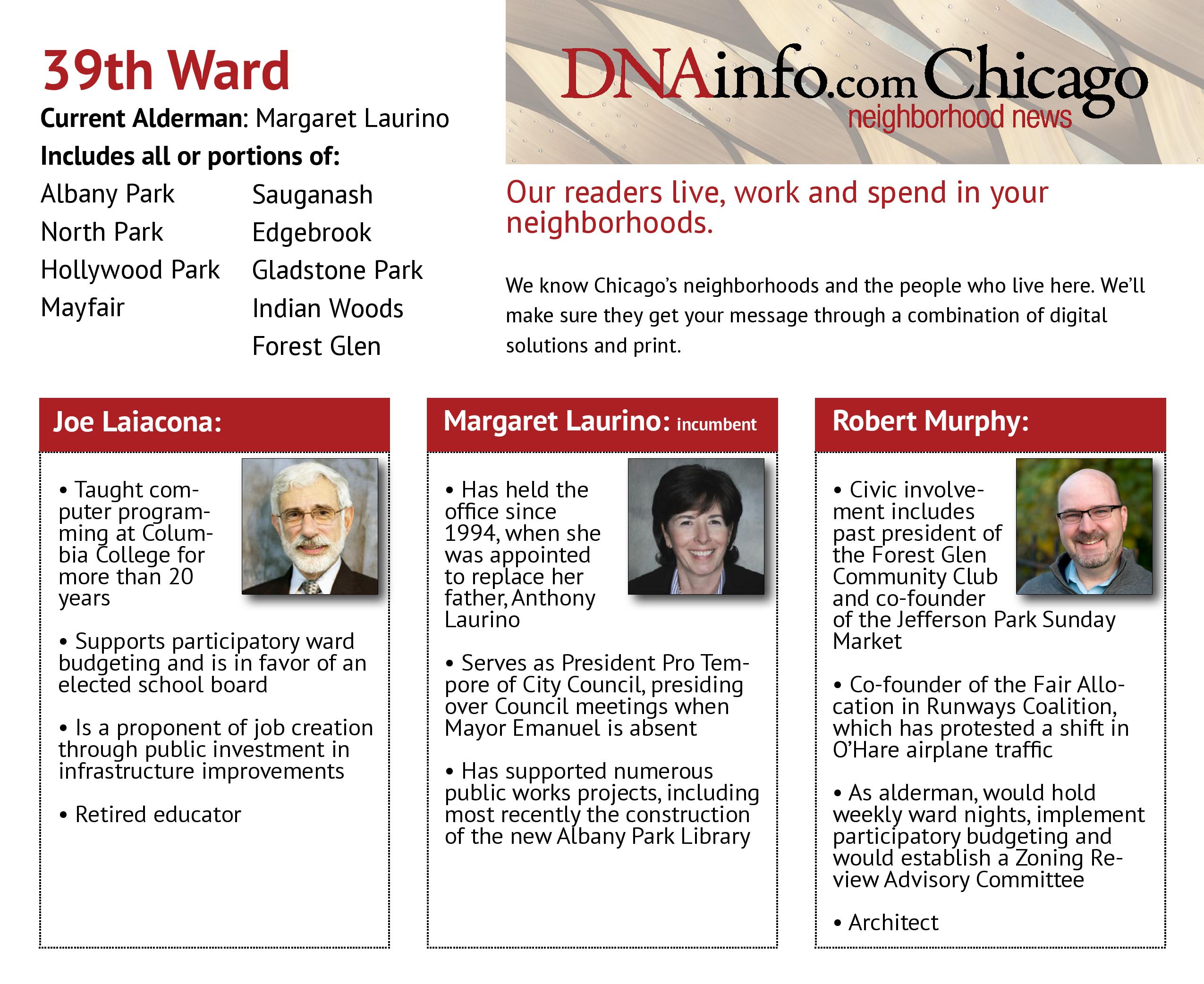 Laiacona is a retired educator, having taught computer programming at Columbia College. He supports participatory budgeting and an elected school board.

Laurino has held the office since 1994, when she was appointed to replace her father. She touts her support of public works projects, including construction of the new Albany Park Library.

Murphy, an architect, is a past president of the Forest Glen Community Club and is co-founder of the Fair Allocation in Runways Coalition, which has protested a change in flight patterns at O'Hare airport. He would increase communication with constituents and establish an advisory committe to review zoning applications.

DNAinfo.com's coverage of the ward's candidate forum can be found here.

The complete forum, which was videotaped by CAN-TV, is available for viewing in its entirety here.

The candidates' responses to questions posed by the Sun-Times editorial board: Laiacona's responses, Laurino's responses and Murphy's responses.

Responses to a questionnaire from the Tribune: Laiacona, Laurino, Murphy.

Daleiden is a math teacher at North River Elementary School and has been actively involved with West Andersonville Neighbors Together. Her campaign platform includes support for participatory budgeting and she has pledged to create advisory committees on education and economic development among other issues.

O'Connor has been the ward's alderman since 1983. He was an early supporter of the Peterson Garden Project community garden nonprofit and has spearheaded the creation of the 20-acre West Ridge Nature Center in Rosehill Cemetery. O'Connor serves as city council floor leader for Mayor Rahm Emanuel.

No public candidate forums have been held or are scheduled in the 40th Ward.

Candidate responses to the Sun-Times questionnaire: Daleiden and O'Connor.

Candidate responses to the questionnaire from the Tribune: Daleiden and O'Connor.

Fiedler is a designer and graduate of the Art Institute of Chicago. Affordable housing and green space are among his campaign issues.

Pawar is running his first re-election campaign, having become alderman in 2011. He's made education his key priority in 2015, with the goal of creating a viable K-12 neighborhood school system within the 47th, 40th and 44th wards.

A candidate forum is scheduled for 7 p.m. Wednesday at Bell Elementary, 3730 N. Oakley Ave., though Fiedler has not committed to attend the event.

Candidate responses to the Sun-Times questionnaire: Fiedler and Pawar.

Candidate responses to a questionnaire from the Tribune: Fiedler and Pawar.