Crews have been working since November to build the new wing, which would include room for offices, drama studies, a new library and a large classroom for its growing seventh- and eighth-grade classes, Principal Debbie Senoff-Langford said.

"For us, it's the completion of this vision we had to have a facility that would allow us to execute a Montessori how we see it," she said Tuesday at the school, 1800 W. Balmoral Ave. 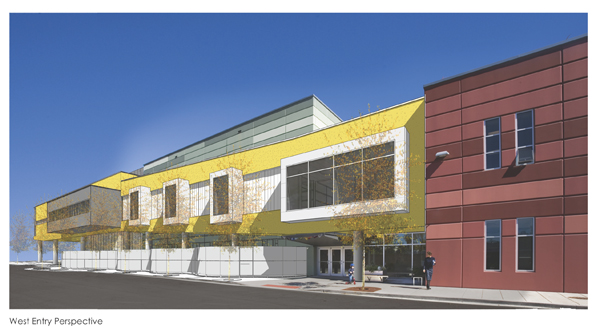 Senoff-Langford said the addition should be completed by late August for the next school year.

The school currently enrolls 390 students but expects to grow to 425. The addition adds 13,000 square feet to the current 47,000-square-foot school.

The addition, designed by architects George Beach and Jeremy Olsen, would be connected by an enclosed ramp on the west side of the building from the second floor. The library and drama room is planned for north of the school's second-floor gym. Suspended on pylons, the middle school classroom would hang over a portion of the parking lot.

Senoff-Langford said the school built its facility 10 years ago and moved from Edgewater.

The Montessori's teachers are welcoming the extra space, she said.

"They're excited, like any teacher, to have the space to do what they want to do," she said.