CHICAGO — How would you react if a bikini- or thong-clad model was striking a pose in the seat next to you on a CTA train?

A River West resident and comedian, who goes by the name Jonathan Fin, wants to know.

The former advertising copywriter has been filming videos on train cars and platforms of models wearing colored bikinis that correspond with each "L" line for roughly two years — a practice the CTA now says it plans to investigate.

Reactions range from "guys pulling out their phones and taking pictures to women saying 'That's disgusting' or 'I don't need to see that,' " said Fin, who runs a Facebook page he dubbed "CT&A."

Mina Bloom says Fin is most intrigued by the reactions:

"Some people don't care. They're reading and this half-naked girl is in their face and they're on the phone like it's another day. To me, that's the most interesting part."

In the photos and YouTube videos posted to his Facebook page — which feature a logo that looks virtually identical to the CTA's official logo — the half-naked models either strike poses or strut down crowded train platforms or tunnels. Some commuters comment on the models' looks or walk away immediately. Others appear confused. 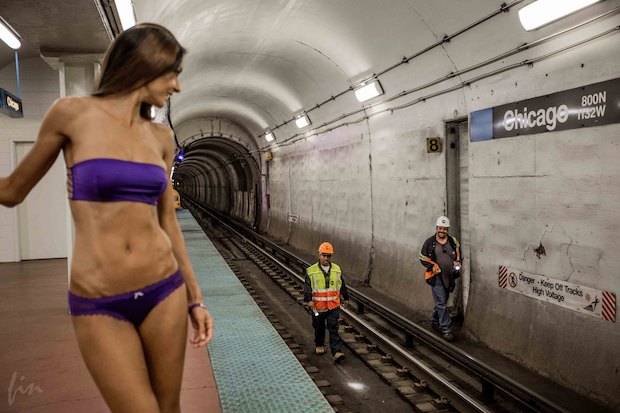 Other videos are shot at empty platforms, or when only the homeless or CTA workers are around, including one dubbed, "Stripper in the Subway."

So far, Fin, who grew up in south suburban Calumet City, has filmed at least eight models treating the train as their catwalk, and he hopes to launch a contest soon so people can vote on their favorite model, he said. Unbeknownst to Fin, one of his clips has even made its way into a promotional video for GoPro cameras.

Since launching the project, Fin said he's gotten his fair share of "haters." He said his mother and sister do not condone his work.

"Half of the people are like this is genius and half are like he's a d-----bag and he should be put in jail," Fin said.

But Fin, 39, has a message for people, particularly women, who find his work offensive.

"It's all because women want to look like that model or they want to be at least as confident as she is to be able to let it go and do a photo shoot in their lingerie," Fin said. "People are jealous that they aren't confident enough and attractive enough. It's a shame."

Still, he acknowledges that the project is "risky." One time, a large group of teenagers threw a bottle that "barely missed" a model's head, he said. And there have been times when a model has felt unsafe or the crowd has grown too large and people start getting "grabby," he added. He said he's interested in making similar videos with male models. 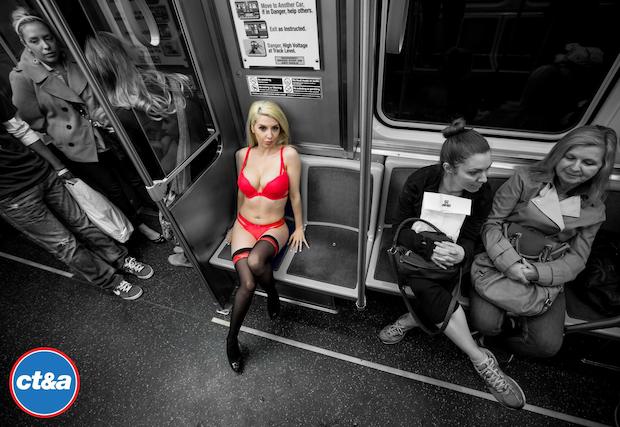 Of course, partial nudity on the CTA isn't new. Take the annual no pants subway ride, for example.

And anyone is allowed to use a hand-held camera, which Fin said he uses, to take photos or video within public areas of CTA stations and train cars, according to the CTA's website. Large cameras that require lighting, tripods or cables, however, are prohibited, the website said.

In one of his videos, a CTA security guard approaches him as he is filming and asks, "Do you have your permits to have your camera today?"

A CTA spokeswoman said Monday, "We object to the use of CTA property to film without authorization and will investigate this matter."

Fin, who likens himself to Playboy founder Hugh Hefner because he said he "empowers women," quit his full-time job six months ago after having worked in advertising for 10 years. That's when he started to devote the majority of his time to comedic videos, among other projects, he said. He is in the process of launching a website, sexysubwaygirls.com.

Many of his videos are undeniably "edgy," he said.

For example, in his video series, "Tips or T---?," models answer the door when a delivery man arrives and she offers either a cash tip or to flash her breasts. Fin charges $5 per episode and $50 for an all-access package, which includes every uncensored episode.

"This whole thing was a social experience, a prank that I had. Then I was like, 'Holy s---, the reactions are so good," said Fin, who said the delivery drivers weren't aware of the stunt in advance. "I knew this had legs."

Fin has sold around two episodes per week over the course of two years, he said. If he doesn't make a profit soon, he said, he might be forced to move back in with his mother, who now lives in Indianapolis.

Fin's other projects, of which there are many, draw inspiration from the CTA. He got a license to play music on the street and on the CTA platform, which inspired him to launch a website called "CTA Stars" to help expose street performers. He also made a comic called "Elevated Chicago" based on interactions on the train. 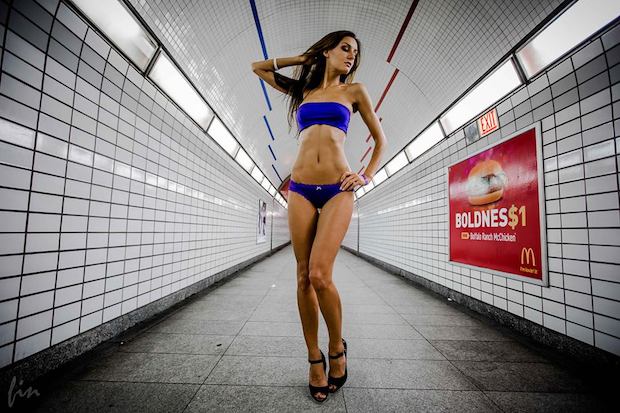 His ultimate goal, he said, is to not only make a profit off of his various projects, but to also create a comprehensive website where people can access all of his "engaging" content at once.

"You wouldn't think twice about taking your kids down to the beach," Fin said. "So there's a girl in a bikini [on the CTA]. It's risky, but I'm not breaking any laws."