EDGEWATER — On her 75th birthday, Helen Lambin celebrated at a place she'd never been before: a tattoo parlor.

Now, a half-dozen years and more than 50 tattoos later, the longtime Edgewater resident credits the decision to begin getting tattoos in her golden years with changing her life “expansively.”

“It radically changed growing older,” said Lambin, 82, a retired secretary who grew up in Iowa. “Because when I talk to these people of all different ages, they find it very entertaining that yeah, there’s this white-haired lady with tattoos but the way they’re talking to me is different. It’s like, ‘Oh it’s okay we can talk to each other.’ ”

Last week, she got yet another tattoo at Chicago Tattoo and Piercing Co., 1017 W. Belmont Ave., where she is greeted as a regular and feels right at home plopping down on a plush leather couch in a common area to wait her turn, while clutching a copy of “How To Be Compassionate" by the Dalai Lama.

Reporter Linze Rice tells us about her time with Helen Lambin.

Lambin has relied on the sole talent of David McNair, a tattoo artist at Chicago Tattoo Co., who has called the shop his home since 1987, to ink her body. She said once she develops an idea, she partners with him to create a cohesive and applicable design. McNair says the pleasure is all his.

"The most gratifying part for me is to see the smile on her face when she looks in the mirror the first time," after the tattoo is finished, McNair said.

The latest ink, spelling out "Via Media,'' meaning a middle way, in Gothic-themed black block letters, is placed between her shoulder blades. Lambin said the phrase pays homage to her "new spiritual home," the Episcopal Church of the Atonement at 5749 N. Kenmore Ave. There, she says, she’s been met with acceptance from the congregation, many of whom have seen her ink. 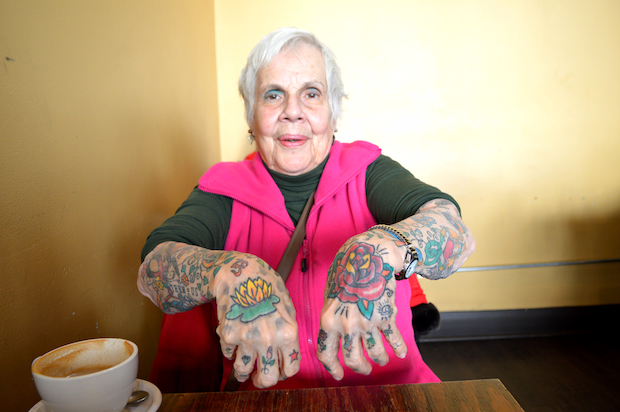 Although those who see Lambin around town are usually fascinated with her bodily artwork, Lambin said, her journey in becoming the woman she is today started long ago.

'Band of Brothers and Sisters'

It was over 20 years ago when her adult daughter came home with a tattoo, and Lambin thought, “If she could do it, maybe I could do it.” But she never gave the idea serious thought until her birthday decades later.

“Initially I got one,” she said. “Well, obviously, it didn’t stop there.”

She had more and more done, and remembers the day she mentioned to shop owner Dale Grande she was “going hard core” by getting tattoos on her fingers.

While getting her latest piece done, McNair said he agreed with Grande's assessment, saying few people at Helen's age are as committed to body art as she is.

"I mean, it's pretty unusual just in the sense that she's so dedicated," he said. 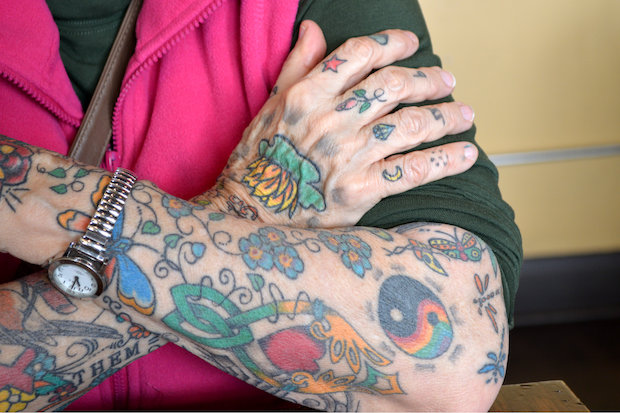 Among her collection from the shop are a penguin (she was briefly in a convent); Celtic symbols; the names of her children; a pink rabbit as a tribute to her husband’s nickname for her, "Bunny," and a vibrant lizard on her left forearm that Lambin says “symbolizes shedding a new skin.”

The tattoo that perhaps best represents her spirit comes in the form of basic text that reads, “Them=Us," set against a backdrop of winding vines and flowers.

“What I discovered, [tattoos] became a bridge,” Lambin said. “It makes you sort of a band of brothers and sisters. When someone will say, ‘Nice ink,’ you know they have tattoos. And then you say, ‘Oh what do you have?’ And you just start talking.”

Does she regret any of her tattoos? "Absolutely not," she says confidently.

Lambin said her tattoos have allowed her to break barriers and approach others, like fussy children on the train or members of the community, in new ways. She never expected her “15 minutes of fame” would come about so late in life, but after her husband’s sudden passing in 1996, Lambin says the tattoos have allowed her to “go on” and embrace each day in the face of hardship. 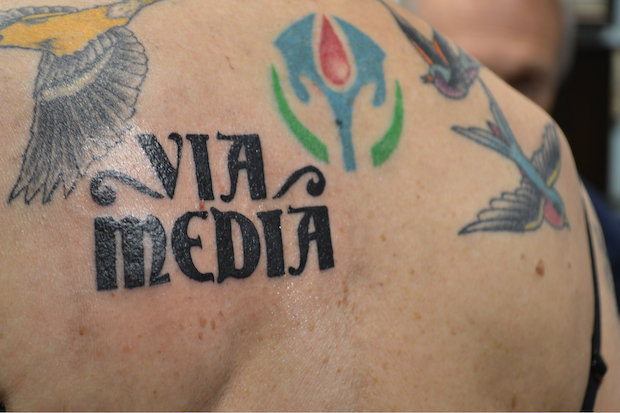 “When my husband died I thought, ‘How will I go on now?’ ” she said. “Instead of going on, definitely old and pure loss, it’s made life much more interesting and positive. I’d say it’s been therapeutic.”

And, she quips, getting tattoos is "cheaper than mental health."

Now, Lambin is faced with a new problem: she’s running out of room.

'Everyone Doesn’t Want You to Be the Same'

Now an active part-time writer and storyteller, Lambin says her love for the Windy City has never waned after moving from Iowa as a young adult. She settled in Edgewater, where she met her husband and has lived in the same home for more than 50 years.

She said her husband’s family, the Lambins, have purposefully called Edgewater their home for nearly a century.

“People tend to talk to you as you walk down the street, and if you’re from a small town like me you tend to do it, it’s just ingrained into your DNA.”

A neighborhood which Lambin loves, but is not without its problems, she says. Problems that have inspired her to express her attitude of love and inclusive beliefs through her tattoo designs, an action she believes is appreciated in a community where “everyone doesn’t want you to be the same.”

“It has a certain feel and a certain tone to it” she said. “And little things, like I’ll be standing at a street corner having a conversation with someone at a stoplight and I may get told out of nowhere, ‘God bless you.’ This is great, I don’t know how many neighborhoods this happens in.”