Kids' Verdict on Maggie Daley Park: 'So Many Fun Things to Do'

"Of all the parks we are building, Maggie's belongs right here," said Emanuel, who was joined by former Mayor Richard Daley, his daughter Nora Daley Conroy and other members of the Daley family, as well as an After School Matters alumna and Park District Supt. Michael Kelly at the long-anticipated ribbon-cutting ceremony Saturday morning.

"For as Mayor Daley was the head of our great city, Maggie was its heart. So her park belongs here, in the heart of Chicago," Emanuel said.

"I just told Mayor Daley: it makes you want to sue your parents for cheating you of a childhood," Emanuel joked. He added that the "one-of-a-kind" park is "graceful and full of life," just like Maggie Daley, who he likened to renowned architect Daniel Burnham and poet Gwendolyn Brooks for making the lives of Chicagoans better.

"The wonder that this park experience brings is something I know would’ve filled my mom with great joy," said Maggie's daughter Nora, fighting back tears.

As soon as Emanuel and the Daleys cut the ribbon, kids and their parents, many of whom were already wearing ice skates, eagerly took to the skating ribbon, a winding, 20-foot-wide path that is a quarter mile long and features 27,500 square feet of ice. The skating ribbon can accommodate 700 skaters at a time.

Admission is free, and on Saturday skate rentals were free as well. Going forward, skate rental is $12.

Triplets Leo, Luc and Enzo, all 8-years-old, were among the first to charge onto the ice clad in Chicago Blackhawks jerseys and hockey gear.

Showing off their skills learned while playing for a traveling hockey league in Glenview, the Zarzuela boys sped down the ice, impressing casual skaters on the sidelines.

They all agreed the ice was "smooth," an opinion shared by Lindsey Roman, 24, who said she has been ice skating since she was 2½-years-old.

The entire park, not just the ice rink, is "cooler than she expected," she said.

"I thought it would be more cheesy and have an amusement park-type feel," said Roman, who lives in River North and works full-time in finance. "But after skating around, it's great that there's so much room."

Joshua Simonds, 37, watched as his wife taught their four-year-old daughter, Audrey, to skate.

Simonds, whose family lives in the South Loop, called the skating ribbon "unbelievable," adding that "for a lot of people who live here, it's our backyard."

But the playground, he said, is even more exciting for him and his family.

"You can't get this anywhere else in the country," Simonds said, referring to the fact that his family now lives in close proximity to both Millennium Park and Maggie Daley Park.

While kids and adults glided through the skating ribbon, families also flocked to the playground, trying out the swings, which resembled futuristic pods, tall slides and countless other play structures.

"[This] park has so many fun things to do," said Paris Miles, 6, who takes ballet classes at Joffrey Ballet on Saturdays and lives with her mother in Englewood.

Kelly said in addition to the three-acre playground on the southeast side of the park—"the likes of which the city has never seen"—the park has "sweeping lawns" for picnicking and a fieldhouse where they are debuting some new programs like archery and dance classes.

They will also be expanding pre-K, early childhood and teen programs at the fieldhouse, Kelly said.

The city bills the play garden as an area that is "in the spirit of Alice in Wonderland and Charlie and the Chocolate Factory."

Meanwhile on Saturday, Millennium Park's ice rink was moderately busy, with people hanging over the railing to watch skaters gracefully glide or take a tumble. 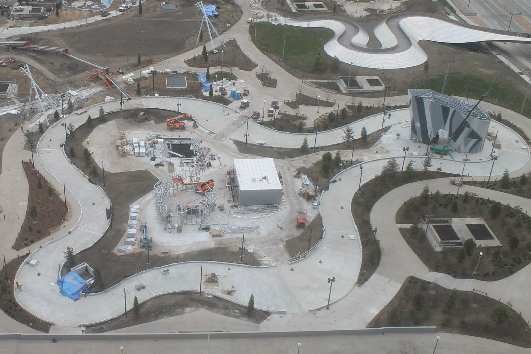