A Lost Castle in Kenwood? Residents Wonder if Remnants Buried Near Bus Stop

KENWOOD — The discovery of a limestone block with a carved cross poking up out of the grass on a hill in Kenwood has left residents debating a mini-mystery: Is there a castle buried under the 47th Street bus stop on Lake Park Avenue?

The 4-foot square chunk of gray limestone is set deep into the turf on a hill behind the bus turnaround amid other smaller scraps of limestone. A worn Celtic cross is roughly carved into its surface, its grooves filled with yellowing leaves from the locust trees on the embankment for the train tracks.

Some longtime neighborhood residents say the stone bears a striking resemblance to the gothic motifs on a demolished faux castle that eccentric former Chicago alderman and Cook County treasurer George F. Harding built in Kenwood nearly 90 years ago. Harding, the heir of Chicago’s largest landowner at the beginning of the 20th century, had a well-known passion for the trappings of Europe’s fading monarchical power and needed a place to house his collection of suits of armor, bearskin rugs and miniature cannons.

“I think it is likely since the Harding museum was built to look like a castle,” said neighborhood resident  Sam Guard, kicking away hedge apples and dead leaves on a recent afternoon to get a better look at the stone.

In 1927, Harding built the faux castle about a block away from where the stone now sits, in the backyard of his house at 4853 S. Lake Park Ave. after being frustrated by the enormous cost of his plan to have a real German castle shipped to Chicago, brick by brick.

He opened the castle three years later with its secret passages, dungeon and keep — a fortified tower — to the public. Local newspaper accounts referred to the structure as the "Treasure House."

The Harding Castle mystery was today's "Story of the Day" on WGN-AM 720:

Guard, 88, lived a little more than a block away from the castle and often brought his four children to the museum in the 1950s.

“This was just perfect for a father to take the kids on a walk on the weekends,” Guard said. “It had a different feel — it looked authentic, but eclectic — he didn’t group things the way a museum showing collections does.”

Nina Helstein, 71, remembers visiting the museum several times as a child growing up in Hyde Park.

“It wasn’t child-friendly; it was a museum,” she said. “It wasn’t our world, it was foreign and a little scary.”

Harding and the nouveau riche of America spent the early 1930s bargain hunting in the ancestral palaces of the German and Italian aristocracy, who were financially devastated by World War I. He and his private pilot William Bock would crisscross the Atlantic bringing back treasures like a suit of armor Queen Victoria presented to Kaiser Wilhelm when he was 10.

“Clearly he must have been reading ‘Ivanhoe’ as a child and never really gotten over it,” said Jonathan Tavares, the curator of the remnants of Harding’s collection, which wound up at the Art Institute of Chicago and for years occupied a high-profile spot in a gallery connecting the older and newer sections of the museum.

The 983 remaining pieces of Harding’s collection are now in a back room at the Art Institute while it awaits a new exhibit space to open in 2017. Included in the collection are several rare photos of the interior of Harding's museum showing full suits of armor beneath frescos of the American Plains and Abraham Lincoln’s black satin chaise longue alongside Renaissance paintings. 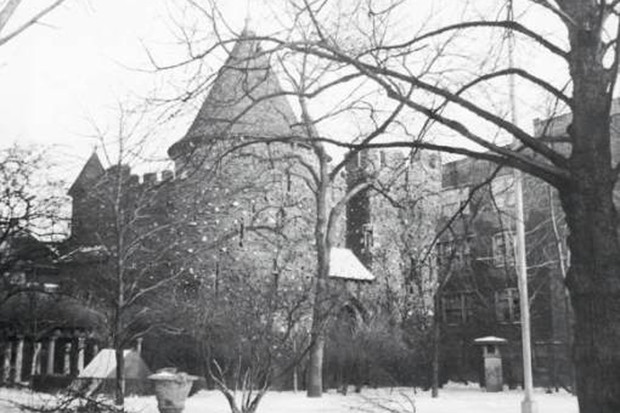 “I would call it eclectic Romanticism,” Tavares said. “When you look at it, you get a sense of a quirky man.”

He pointed to artifacts in the photos arranged in an anachronistic mishmash, with armor from different time periods and regions of the world arranged together and featured on a mannequin astride a fake stallion.

Despite Harding’s reputation for rarely traveling with an expert in armor — like his competitors often did — Tavares said Harding amassed a startlingly impressive collection that was nearly 1,500 pieces at its height.

The collection includes a black-and-gold breastplate worn by the Holy Roman Emperor Ferdinand II; a combination pistol and hunting dagger with matching belt from the short-lived Emperor Maximilian I of Mexico; and a sword from a 12th century crusader.

“He likely didn’t know this, but he had the gun of King Louis the XIII,” Tavares said.

Startlingly little is known about where Harding acquired these pieces or whether he knew what he was buying. The collection was preserved and maintained by a Japanese-born metals student Harding had plucked from the School of the Art Institute. Sadly, he was sent to an American internment camp during World War II and never returned, according to Tavares.

Harding continued adding to the collection until his death in 1939 from complications of a gallstone surgery. His housekeeper stayed on after his death to mind the museum until the city proposed tearing it down in 1960 during the federal urban renewal programs that dramatically reshaped Kenwood.

The homes along the east side of Lake Park Avenue were demolished in 1961 so the roadway could be expanded and moved east. The caretakers of the Harding museum launched a battle to avoid demolition before quietly moving the collection Downtown.

The collection languished for 16 years unseen in the Crerar Library building until 1982, when the Art Institute took over the collection to resolve a lawsuit claiming that the Harding collection’s directors were selling themselves Remington sculptures at a steep discount under the pretense of raising money for the museum.

The Harding castle lost its lawsuit to avoid demolition in 1965 and was added to the top of the rubble heap.

Sam Guard thinks that heap is now the small hillock behind the bus stop at 47th Street and Lake Park Avenue.

“There used to be quite a bit of stone poking out over here,” Guard said climbing up the hill. “I wouldn’t be surprised if we’re walking on rubble.”

He said his own experience working in construction as a young man taught him that rubble gets moved around a lot.

“That stone could get displaced; I don’t have any problem with that,” Guard said.

But others think that claims is a stretch.

She said there are very few good pictures of the exterior of the castle, so it’s difficult to be certain, but she doubts the stone and other fragments in the ground were part of the photo.

Davis said she’s skeptical that demolition crews would have moved the rubble that far north and suspects the castle is buried under Lake Park Avenue or inside the railway embankment.

“My gut says the stone is not from Harding but something farther north on the block,” Davis said.