THE LOOP — Christkindlmarket is returning to Daley Plaza later this month, but its über popular boot mugs aren't.

The big German-themed holiday fair is rolling out "punch kettle" mugs when it reopens Nov. 17 at 50 W. Washington St.

Chicagoans can sip hot spiced wine or cocoa out of the maroon and gold mugs at Christkindlmarket, which is known just as much for its collectible mugs as its candy cane-striped huts that pop up in the Loop for the winter holiday season.

RELATED: Christkindlmarket Boot Mugs Through Time: Which One Is Your Favorite?

The market's souvenir mugs — especially the ones shaped like boots — are a highlight of many festivalgoers every year. Many Chicagoans complain on social media when Christkindlmarket sells anything other than a boot mug, but the fair has said in the past that "if we had them every year, they wouldn't be as special."

The round "punch kettle" mug design this year is new for Christkindlmarket.

The mugs will be sold for $5, or $7 with Glühwein (mulled wine) and other beverages. Christkindlmarket will also sell a Kinder Club mug for kids featuring "Opa" (Grandpa) Snowman this year.

Styled as a "picturesque European holiday village," Christkindlmarket will feature nearly 60 vendors selling everything from schnitzel and sausages to jewelry, nutcrackers and cuckoo clocks. It's hosted by its namesake Christkind, a golden-haired angel who brings gifts to children. An "Alpine brass" band will play for the crowd, and the market will host daily Advent calendar prize drawings.

Christkindlmarket drew 1.5 million visitors last year to Daley Plaza, according to the German American Chamber of Commerce of the Midwest, which produces the festival.

Christkindlmarket will have shorter hours, 11 a.m.-4 p.m., on Thanksgiving  and Christmas Eve, the market's last day. Admission is free. 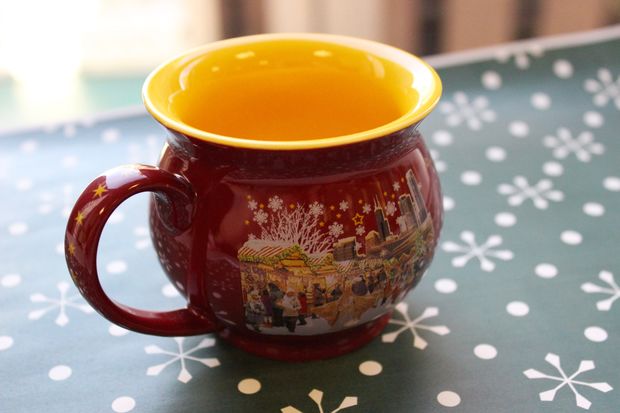 The other side of the 2017 mug. [DNAinfo/David Matthews] 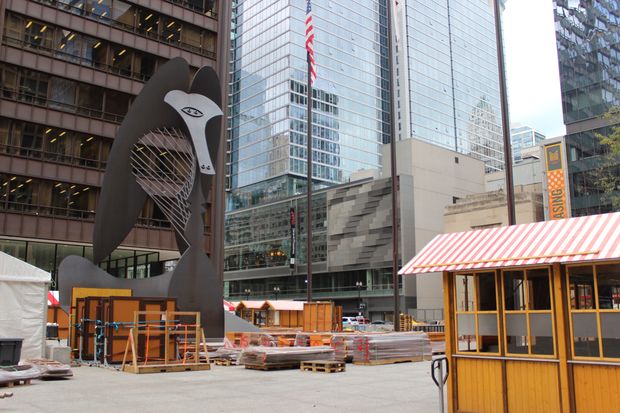