By Howard Ludwig |&nbspOctober 31, 2017 8:32am
@howardaludwig
Twitter Facebook Email More
Mary Cate Lynch (front) stands on the stairs at Christ the King School in Beverly with a group of sixth grade students. The students attended a preview of "Wonder" Thursday. They said the movie followed the book closely.
View Full Caption
DNAinfo/Howard A. Ludwig

BEVERLY — Kerry Ryan Lynch of Beverly wisely took a box of Kleenex into the theater last week for a sneak peek of "Wonder" with some of her daughter's classmates.

The movie details the life of August Pullman, a boy with facial differences who enters fifth grade. Based on author R.J. Palacio's novel by the same name, the movie delves into Auggie's experience attending a mainstream elementary school for the first time.

Lynch has used the book to teach countless students about the struggles that come with looking different. She has visited 125 schools to spread a message of inclusion and concludes each visit with students pledging to "Choose Kind."

Lynch's daughter, Mary Cate, often joined her mom on these school trips. Mary Cate was born Dec. 8, 2011 with Apert syndrome. This rare condition is caused by an extra protein on one of Mary Cate's genes. It results in extra bones and cartilage, yielding a misshapen skull and melded fingers and toes.

"Seeing in Julia Roberts' eyes the stress, anxiety, love and joy, it is not something people see every day," said Lynch, who noticed parts of her own life reflected in the movie she gave a rave review. 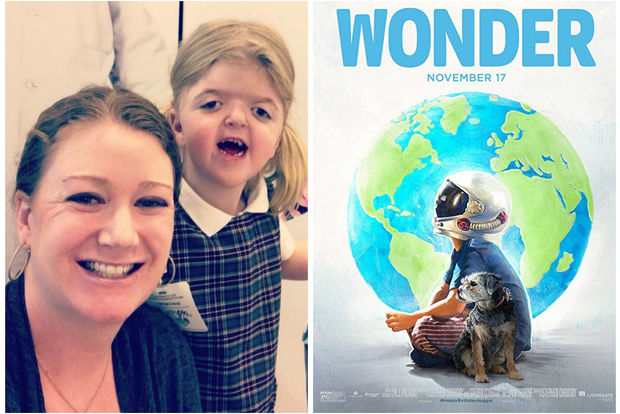 Kerry and Mary Cate Lynch have used the book "Wonder" to teach students from throughout the area the importance of inclusion. Kerry Ryan Lynch saw a preview of the movie Thursday and gave a rave review. [Supplied Photo/IMDb]

Lynch attended the screening Thursday with 30 sixth-grade students from Christ the King School in Beverly. Mary Cate is in kindergarten at the Catholic school at 9240 Hoyne Ave.

Teacher Kelsey Suglich's students were given tickets to a special preview of the movie after being named a Certified Kind Classroom. This designation is earned by teaching lessons of kindness related to the book.

Almost all of those attending the show at the Regal City North Stadium Theater in Avondale gave the movie an enthusiastic thumbs up, according to a sampling of six students from Christ the King.

"A lot of the movies you see in the movie theater, you see them, but you don't think about them again. This one is something you will think about for the rest of your life," said Brenna Altenbach, 12.

The sixth-graders all read "Wonder" last year, and the students agreed the movie followed the story laid out in the book closely. Their special showing also included a video question-and-answer session with actors Jacob Tremblay, Daveed Diggs and Izabela Vidovic.

For the students at Christ the King, Mary Cate doesn't really stand out much anymore. They said she is treated like any other kindergartener. And they all appreciate the effort her mother has put in to teach them about Mary Cate's condition.

Mary Cate will see the movie Nov. 17 with her classmates as a school-wide field trip is planned for the official debut of "Wonder." Those attending the sneak peek said the movie will eventually be used in schools nationwide to spread an anti-bullying message.

"It will make you 'Choose Kind' for the rest of your life," said Ryan Runaas, 11. 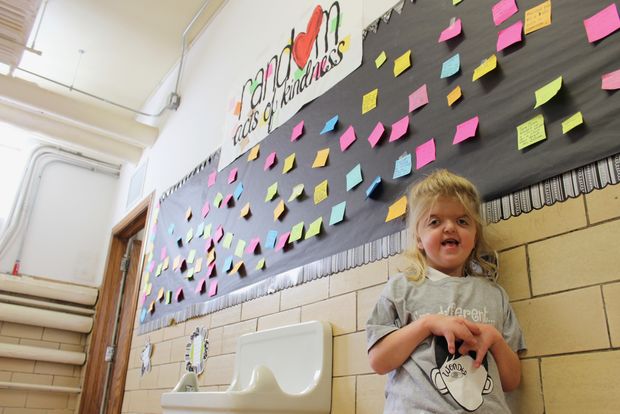 Mary Cate Lynch will see the movie "Wonder" with her classmates as part of an all-school field trip on Nov. 17th. [DNAinfo/Howard A. Ludwig]

Lynch posted her review on Facebook after seeing the preview. Her heartfelt response to the movie had 738 "likes" and "loves" as of Tuesday morning, including a comment from author R.J. Palacio.

"What an amazing endorsement," Palacio wrote. "I can't wait to share your post with the producers and director. They wanted, more than anything, to do justice to the challenges and joys unique to children with craniofacial differences and their families."