By Howard Ludwig |&nbspOctober 26, 2017 6:30am
@howardaludwig
Twitter Facebook Email More
Ciara Nichols (left) and Tara Luczak are both involved with Campus Ministry at Saint Xavier University in Mount Greenwood. An online petition calls out the university on plans to move the student ministry offices away from McDonough Chapel.
View Full Caption
DNAinfo/Howard A. Ludwig

MOUNT GREENWOOD — A petition circulated widely on social media this week calls out Saint Xavier University for moving its Campus Ministry offices away from the McDonough Chapel.

The online petition was launched Monday evening and had 4,423 signatures as of Thursday morning. The petition was written by about a dozen students involved in Campus Ministry.

Ciara Nichols, Susannah Marevka and Tara Luczak are all active or former peer ministers on the university's main campus at 3700 W. 103rd St.

They said Wednesday the petition was prompted by news that offices used by the graduate assistants tasked with leading Campus Ministry and an office used by Sister Carol Mucha would be moved.

Replacing the Campus Ministry offices within the building that also houses the chapel will be new offices for Saint Xavier's President Laurie Joyner and her staff. Construction on Joyner's new office began about a month ago and workers were back on the job Wednesday. 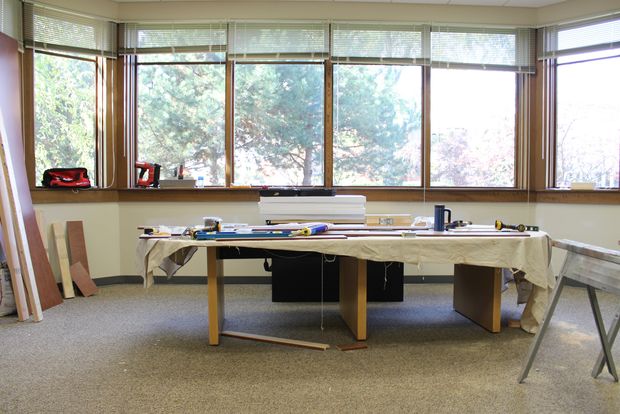 Construction has already begun to convert a conference room previously used by Campus Ministry at Saint Xavier University to an office for President Laurie Joyner, according to students at the Mount Greenwood school. [DNAinfo/Howard A. Ludwig]

Joyner's office will replace a conference room that the authors of the petition said Campus Ministry organizers had been using to plan retreats, hold meetings and even as a quiet place to study.

Nichols and Luczak said they think Joyner's support staff will take over the offices now used by graduate assistants and Sister Carol, who is frequently found selling used books on campus to raise money for students who would not otherwise be unable to afford Campus Ministry's retreats.

He said Sister Carol has been consulted on the forthcoming changes, and Campus Ministry will be given a new home, "within the soon-to-be configured space within the Student Affairs area."

Campbell said Student Affairs was home to Campus Ministry offices prior to the construction of the McDonough Chapel of the Mother of Mercy in 2000. The new chapel included place for the Mercy Ministry Center.

He went on to say use the center has diminished over time and there are other places where student meetings can be held across campus. He said Campus Ministry's new location will be "a warm and welcoming environment." 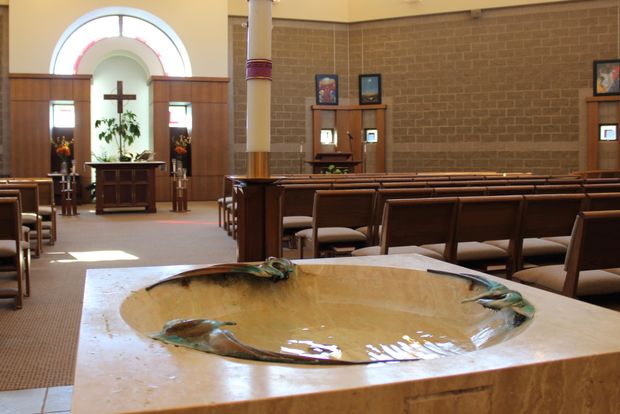 Holy water greets those who enter the McDonough Chapel of the Mother of Mercy. The chapel is at the heart of Saint Xavier University's main campus in Mount Greenwood. The building also houses Campus Ministry. An online petition calls for the university to keep these student offices in the same building as the chapel. [DNAinfo/Howard A. Ludwig]

As for the on-campus chapel, Mass will continue to be held at noon weekdays and 8 p.m. Sundays. The chapel's operation will remain unchanged, said Campbell, again highlighting that only the use of the adjacent offices is being revamped.

Luczak was unmoved by the Campbell's email, saying Joyner already has a perfectly fine office and moving it seems like a costly decision for the supposedly cash-strapped university.

Saint Xavier officials agreed to meet with students at 3 p.m. Friday in the Warde Academic Center to discuss the move. The conversation is also expected to include talk about the position of director of Campus Ministry.

This position has been vacant this year. Without such a leader, Marevka said decisions regarding Campus Ministry are being made without someone lobbying on its behalf.

"All of these decisions were made without student input," Marevka said.

And none of them were eager to move away from the building they share with the chapel — particularly to be replaced by administrative offices.

"It just feels like a misuse of this building," said Nichols, a junior at Saint Xavier.