By Alex Nitkin |&nbspOctober 26, 2017 6:09am | Updated on October 31, 2017 11:32am
@alexnitkin
Twitter Facebook Email More
The rink is on track to be built in the spring, officials said.
View Full Caption
DNAinfo/Alex Nitkin; Facebook/Chicago Blackhawks

EDISON PARK — City agencies will pay $125,000 in connection with the construction of a new roller hockey rink set to be built in Brooks Park in the spring — undercutting repeated claims by Ald. Anthony Napolitano (41st) that the rink would come at no expense to taxpayers.

Napolitano announced in May the Chicago Blackhawks had agreed to donate $250,000 for the rink, but after landscaping work began on the project, a group of neighbors raised alarms over the rink's potential to worsen flooding in an area already prone to water-logging after rain.

Internal emails and documents obtained by DNAinfo Chicago show the city's buildings department asked park officials in June to account for rain water trapped by the 72-foot-by-165-foot impermeable surface, and that the Chicago Park District and Napolitano's office would together have to pay $125,000 for the drainage system.

Per city ordinance, "new developments need to limit the flow rate of stormwater leaving a site to prevent flow from reaching the sewer system at a rate that is faster than the sewer can carry it away," Tostado said. "To comply with that ordinance, the Chicago Park District will build a detention system for the rink at Brooks Park to be viable."

Construction permits have already been issued for the detention system, Tostado added. 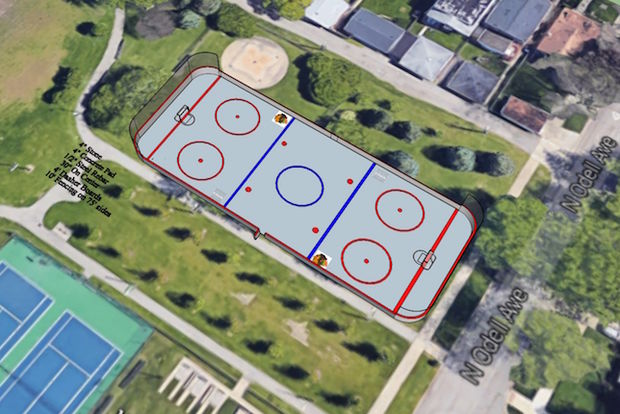 A spokesman for the Blackhawks declined to comment on the rink, but Tostado said the team "will pursue a permit" to build the rink, setting the stage for construction to begin in the spring.

Asked about the expense, Napolitano released a statement Wednesday saying his constituents are "extremely excited that the Chicago Blackhawks have chosen us to help grow the game of hockey" through their six-figure donation.

"The Chicago Park District and the 41st Ward office have vowed to go above and beyond to address any standing water issue," Napolitano's statement continued. "We are currently looking at funding options for any additional expenses incurred."

At a packed May 22 meeting called by the Brooks Park Advisory Council to discuss the rink, neighbors praised the alderman for following through on his campaign promise to drive more resources to the "forgotten 41st" Ward.

But some others, including Michelle Molise, demanded to know how the rink was approved without public input, saying they worried about its potential to surge flooding in the park. Molise called the prospect of laying a hard surface over grass an "imminent flood risk" if it were built without improved sewers.

"I've been saying since Day One that this is the worst spot to put a paved surface, and they've chosen to dig in their heels and not take any community feedback," Molise said in August. "I have yet to hear one response as to why this has to be built in a flood zone."

Through multiple Freedom of Information Act requests filed over the course of months, Molise unearthed dozens of internal plans and documents across a swath of city agencies, including a June 15 memo from the city's buildings department asking planners to include a "bioinfiltration system" to catch water runoff from the rink.

Molise also provided DNAinfo Chicago with emails from park district chief operating officer Patrick Levar and senior project manager Michael Lange, who said city agencies would have to pay $125,000 for the field, on top of at least $1,000 for a study of water runoff in the park.

"I'm not paying the entire cost," Patrick wrote in one email dated June 14. "Alderman going to have to come up with some coin."

At the May 22 meeting, Napolitano cited the project's cost as a reason why his office hadn't consulted the public before crews started tearing down trees to make way for the rink. The team will pay for new trees to make up for the 29 being removed, he added.

"What happened is that when any project like this happens, when they want to allocate public funds, which is your tax dollars, they usually have about 15 to 20 meetings letting everyone know what's going on, to try and justify how it's going to be spent," Napolitano said during the meeting. "In this case, this was money that was gifted."

The alderman told DNAinfo as recently as August, two months after Levar's email, that the rink is "not going to cost a dime to taxpayers." 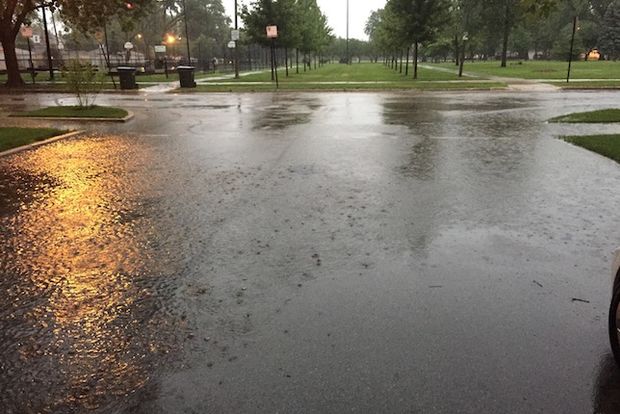 Even after light rain, the park is inundated with standing water, according to neighbor Anne Williams. In the 20 years she's lived in her home, she's spent tens of thousands of dollars preventing and repairing flood damage, she said. [Anne Williams]

That public cost came as a shock to Anne Williams, whose home on Greenleaf Avenue faces the park. In the 20 years she's lived there, she's spent tens of thousands of dollars preventing and repairing flood damage, she said.

"It's been six months, and there's been no diagram, no drawing, no blueprint, no nothing," Williams said. "All they keep saying is that it's a free rink, but there's been a complete lack of transparency over where all the water is going to go."

In the months since the Blackhawks unveiled their plan to complete the rink by "early summer" this year, the team announced and completed another rink in Kennedy Park in the South Side's Morgan Park neighborhood.

The delay has been a test in patience for Jacob Dickman, whose 9-year-old son has to commute to the suburbs to play hockey on a standard rink. Dickman, whose own home in the 7200 block of West Fitch Avenue also touches the park, said his son "smiled ear-to-ear" when the rink was announced in May.

And Dickman doesn't mind the public expense for the rink, especially since Far Northwest Side hockey families have spent "hundreds of thousands" of dollars at suburban rinks, he said.

"If you tell me it costs $125,000 to put a smile on my kid's face, and the faces of hundreds of other children in the neighborhood, to me that's well worth it," Dickman said. "This is why we pay taxes — so we can have services our families can use in and around the park."