DOWNTOWN — A Chicago developer shared his vision Tuesday for Holy Name Cathedral's former parking lot, an ambitious plan including a tower almost as tall as the nearby John Hancock Center.

The 76-story tower at Chicago Avenue and State Street would be the eighth-tallest in the city if built, and the third-tallest north of the Chicago River.

The proposal by Jim Letchinger of JDL Development also includes a 45-story tower that would rise from a nine-story base.

The proposed $740 million development, dubbed One Chicago Square, would include nearly 900 new high-rise homes; 200,000 square feet of retail, including a new grocery store and gym; 45,000 square feet of office space; and 900 parking spaces, 225 of them for Cathedral guests.

"It's a full city block, so it commands a big project," Letchinger said.

The developer shared his plans with River North neighbors a few weeks after filing a zoning application outlining the proposal.

The project would include 795 apartments and 75 luxury condominiums. Letchinger said he couldn't disclose the names of his prospective grocery store and gym, but he said the gym would be "the most spectacular health and lifestyle club since the East Bank [Club] was built."

The two-floor gym would have a 45,000-square-foot rooftop with two pools, he said. The building would also be dog-friendly.

Here’s how traffic would flow pic.twitter.com/wNM0BTTA8R

At 962 feet, the taller of the two proposed towers would be nearly as tall as the 1,127-foot John Hancock Center or Two Prudential Plaza, 180 N. Stetson Ave.

The rest of Chicago's five tallest towers include Willis Tower, the Trump International Hotel & Tower, the Vista tower under construction on Wacker Drive and the Aon Center. The Franklin Center at 227 W. Monroe St., which is 1,007 feet with its spires included, and Two Prudential Plaza (995 feet) would also be taller.

The project's height presented Tuesday was cut down slightly from the 1,011-foot height shown in JDL's zoning application earlier this month.

Letchinger attempted to assuage concerns about the project's density by comparing it to other nearby high-rises.

"We’re certainly taller than many of the other buildings, but what we’re not though, is larger," he said. "I know tall is scary, but tall and skinny is very elegant."

Developer shows this slide to curb NIMBYs. “We’re certainly taller than many of the other buildings, but what we’re not, though, is larger” pic.twitter.com/aPt7h1mj6B

Some of the apartments would wrap around the tower's nine-story base so that there wouldn't be a "false facade" near the street, Letchinger said. He envisions co-working spaces and perhaps medical offices for the project's office portion instead of larger tenants.

High-rise construction is nothing new for JDL Development, which replaced the former Ed Debevic's diner with an apartment tower and is building an ultra-luxurious 37-story condominium tower next to the Waldorf Astoria in the Gold Coast.

Letchinger's plans require city approval. The development site sits in the city's 2nd Ward, represented by Ald. Brian Hopkins, who set up an online survey for the project.

"My job in this process is to represent the neighborhood, the voices of the community and to work with the developer and the city Planning Department to see if this is something that can be supported by the neighbors," Hopkins said. "I assure you, I have not made up my mind yet."

JDL would satisfy One Chicago Square's affordable housing requirements with the city by building 44 such units at a different site, less than six blocks away, Letchinger said. The project would also contribute $7.7 million to the city's affordable housing fund and would generate more than $8 million in new real estate taxes annually on a site that was not paying property taxes because it was owned by a church.

Letchinger estimates the project would create more than 400 permanent jobs once it opens. The developer is partnering with New York-based iStar Financial in the venture.

The Archdiocese of Chicago reportedly sold Cathedral's parking lot for more than $110 million earlier this year amid slipping attendance and churches falling into disrepair across the Chicago area. An archdiocese spokeswoman told DNAinfo last year that proceeds from the sale would go toward "debt repayments" and the archdiocese's other cash needs.

Letchinger said the archdiocese is making arrangements with nearby garages to handle Cathedral's parking during construction.

Though it's long been viewed as a prime development site, the parking lot also is known as the place where mobster florist Dean "Dion" O'Banion was shot dead in 1924 for double-crossing onetime Chicago Outfit boss Johnny Torrio and his protege, Al Capone.

The proposed project is designed by two Chicago architecture firms: Hartshorne Plunkard Architecture and Goettsch Partners. View more of the proposal below: 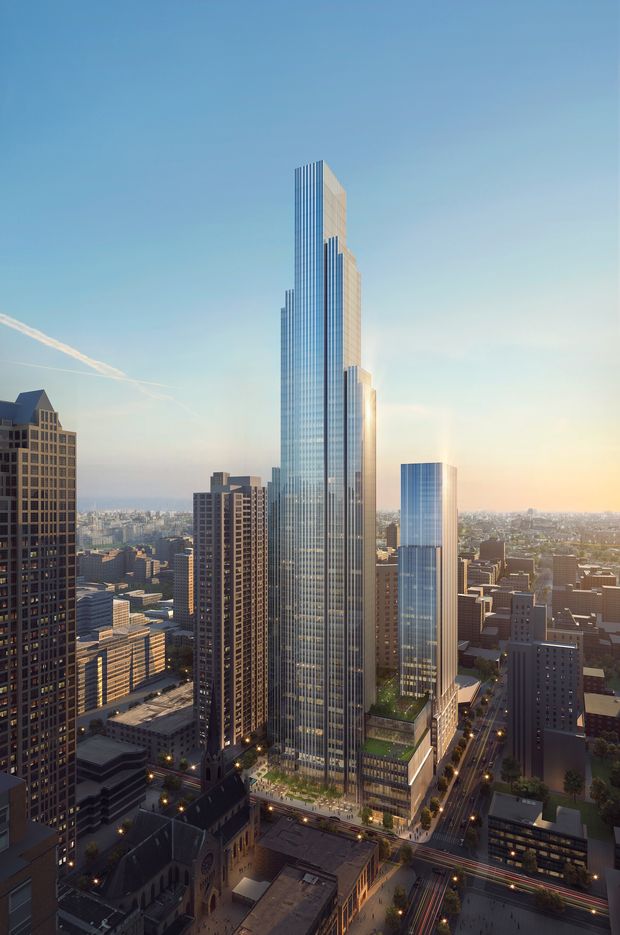 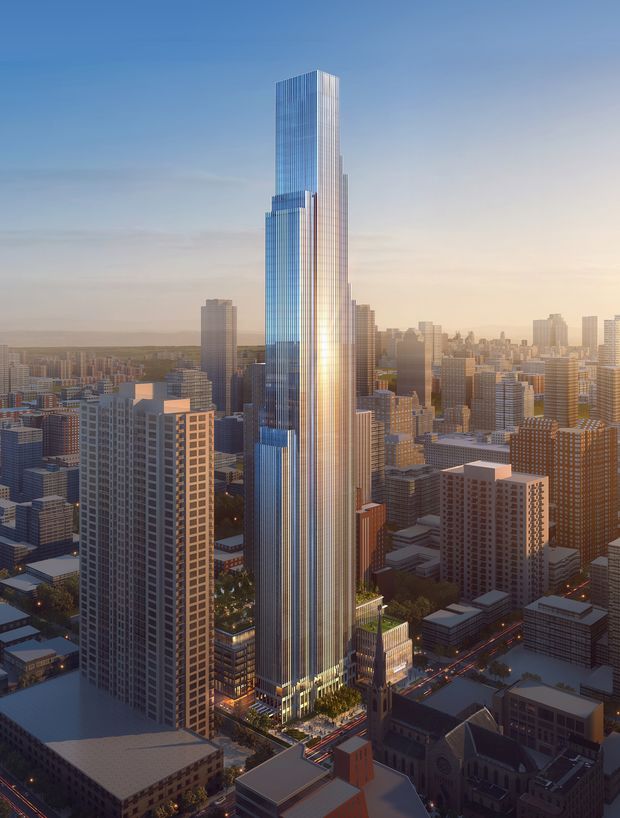 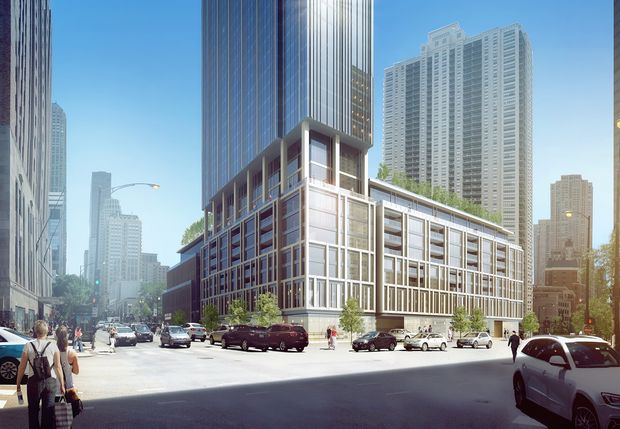 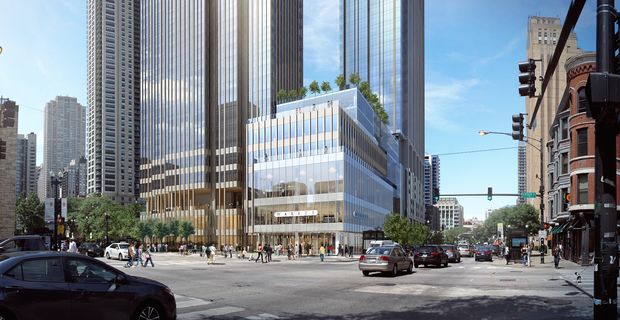 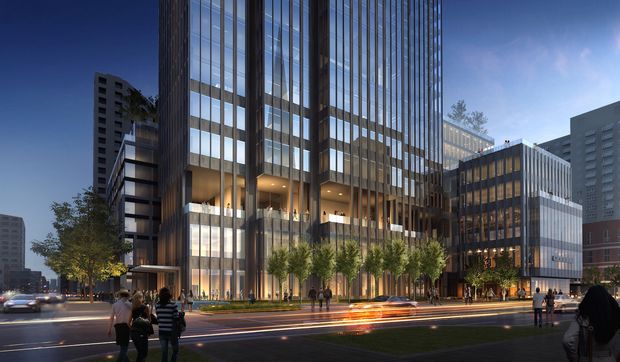 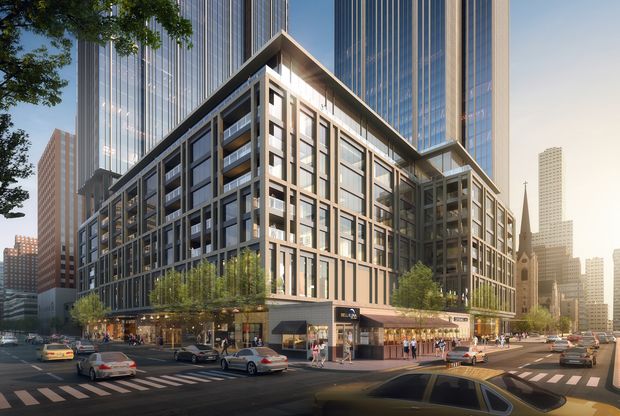 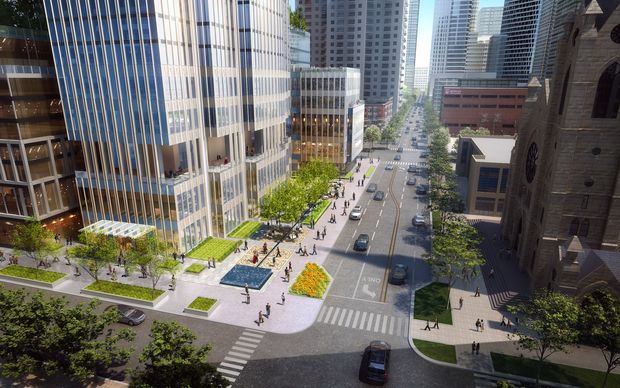