WEST TOWN — After receiving an anonymous letter targeting their African-American nanny, two West Town moms and the nanny have fired back with their own letter and are inviting the community to a "Stand Up to Hate" play date.

The all-ages "Stand Up to Hate" play date, open to anyone with or without children, is set for 5 p.m. Thursday in Talcott School's playground at 1840 W. Ohio St.

Ald. Joe Moreno (1st) described the anonymous letter, which is filled with racial slurs and calls the nanny the n-word, as "repulsive." He said he plans to attend the play date and encourages the community to join him.

On Oct. 16, the unstamped, unsigned letter was placed in the mailbox of Heather DeJonker's Ohio Street home.

"It was very upsetting to all of us, and while we were deeply hurt, we also knew that silence was not an option. We had to take action," DeJonker and Maria Ippolito wrote on the Facebook page for the event.

The two took the letter to the police, contacted the alderman and installed security cameras, they said.

"We were all absolutely sickened by this, but luckily most of the community has rallied around us and our babysitter. As a group, we decided that we need to do more," they wrote.

The nanny, Ferrai Pickett, who has a degree in early childhood education from Moraine Valley Community College and plans to teach preschool or kindergarten, began watching DeJonker's now 5-year-old daughter in August 2014.

Sometimes Pickett brings her 9-year-old nephew and 6-year-old niece to her nanny job. On those occasions, the five children often hold hands when they walk together.

"We felt so lucky that our children could spend so much time together, especially in the summer when everyone is off from school. They call themselves the ‘Kids Club’ and the love they have for each other is pretty remarkable," Ippolito said.

The author of the anonymous letter — it is signed "Concerns [sic] Ukrainian Village Moms" — is addressed "To Whom It May Concern."

The letter says it's "amusing" that the nanny's employer is "trying to rebel against the greatest leader this country has ever seen" by hiring her.

"Honestly, you need to fire her because otherwise it looks like she is your modern-day mammy. Please take heed to the advice being shared in this letter, find a new nanny. We do not need an infestation in our community," the letter says.

DeJonker, a high school math teacher, said her mother was visiting and was the first to see the letter.

"She was horrified. She called me at work and told me about it. When I read the letter, it felt like a punch in the stomach. I was nauseous, and I was praying to God that Ferrai didn't have to see it,” DeJonker said.

DeJonker, Ippolito and Pickett drafted their own letter back to the letter writers.

"In penning this letter, you wrote some truly sad, hurtful and completely false information we will not dignify with a response," they wrote.

In an email, Pickett said she has not seen the letter, but when she first heard about it, she considered quitting.

"But then I remembered I have little ears listening to my every word. Little eyes watching my every move. Little hearts filled with love. Little brains thirsty for knowledge," she said. "So why be angry and lash out when this person isn’t the first, last or only racist."

She said she "had to take a deep breath and a step back" and use the incident "to teach the kids" and "show them how to handle adversity correctly."

DeJonker and Ippolito said they do not know who wrote the letter.

Officer Laura Amezaga, a Chicago Police Department spokeswoman, confirmed that DeJonker filed a police report. Amezaga said authorities are not treating the letter as a hate crime because no threat was made.

The mothers said they "chose to live in the neighborhood because of the diversity and have fallen in love with the area."

"It feels like a small town in that everyone looks out for one another. Even after this happened, people started texting and coming up to us in the playground to offer their support,” DeJonker and Ippolito said in a joint email.

Ippolito, who works for a nonprofit group that serves South Side Catholic schools, said that her response to the letter was to "do something."

“We knew that we could not remain silent or else it would seem like we were agreeing with this person or that we were afraid to speak up. We are all in the field of education and decided to use this as a teachable moment for our kids,” Ippolito said.

Pickett created a Facebook page for the play date and said all are welcome, with or without children.

"This is an opportunity to bring the community together," Pickett wrote.

During the play date, participants will create "links of love" using connected paper hearts featuring a positive word or phrase.

“In our country today, there seems to be a steady stream of bad news. There is so much negativity, but these kids know nothing other than they are friends, and they love each other. These kids give me hope and help me keep the faith that change and unity is possible," Pickett said.

Another West Town resident received racist propaganda in his mailbox in early May, according to members of an online community group. That letter had suggestions for "pro-white" podcasts, YouTube channels and links to Holocaust denial conspiracy theories.

The resident called the note "disturbing" and said it came from an anti-Semitic group. 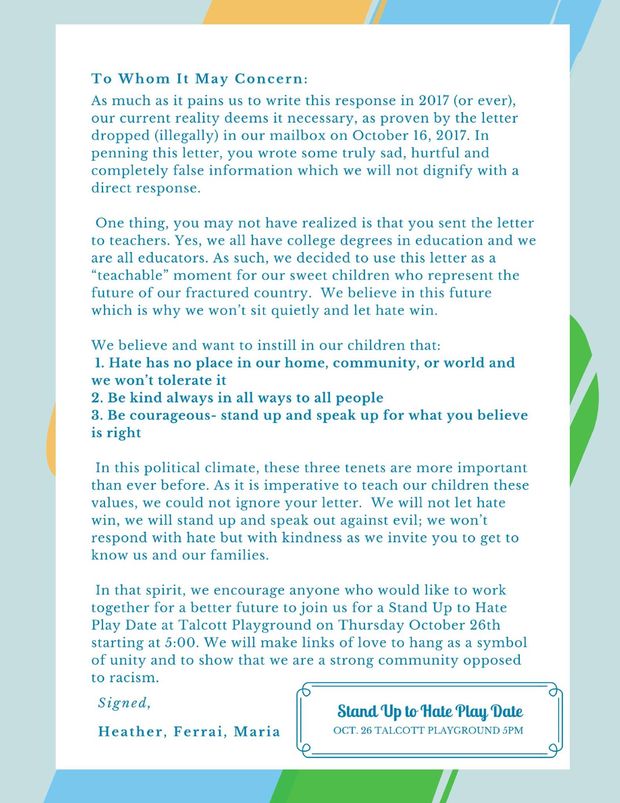