The 1-mile walk from the school at 9241 S. Leavitt St. to the park at 9625 S. Longwood Drive was meant to be symbolic, said Diane Pajkos, coordinator of Kellogg's International Baccalaureate program.

The 79 students in Kellogg's sixth, seventh and eighth grades have been studying water shortages in Africa. They learned how some women and children there walk upward of 6 miles every day to access drinking water, Pajkos said.

To further drive home the point, Pajkos brought gallon jugs of water to school Thursday. Children walked around the campus with the jugs, offering another a glimpse of what it is like for those without easy access to clean water.

"It really opened up the kids' eyes," Pajkos said. 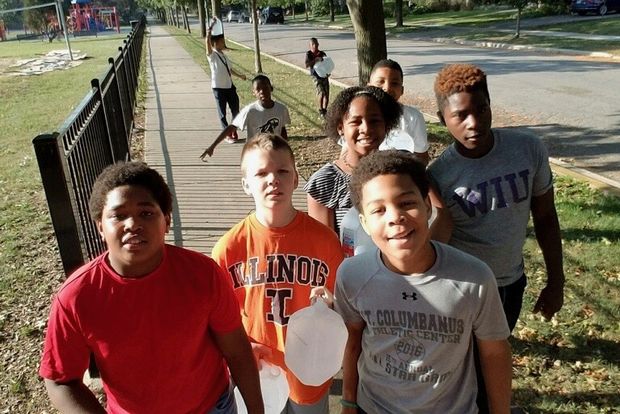 Students at Kellogg Elementary School walked around campus Thursday carrying jugs of water. The walk was meant to give students an idea of what it's like for those in Africa without readily available drinking water. [Supplied Photo]

She added that many students were surprised to learn that women and children are often sent on these long walks for water. And predators are known to stalk such vulnerable groups, making the journey both difficult and dangerous.

Often, wells are placed near schools. This is meant to encourage parents to send their children to classes so they can return with water, Pajkos said.

"If we could get the wells by the schools, it would let these girls get an education," she said.

The idea to raise money for wells came after several teachers at Kellogg became involved with WE Day late last year. Through this charity, they learned about Africa's water crisis.

This led to the fundraising effort. It was paired with students learning about water filtration systems, water conservation and making public service announcements about the responsible use of clean water.

The students took home sheets calling for sponsors with the goal of raising $1,000 to rehabilitate one well in Kenya. As of Wednesday, they had raised $2,800, according to Kellogg's Principal Cory Overstreet.

Pajkos said the money raised by Kellogg students will be given to WE Charities, which will facilitate the well rehab projects.

Amber Payne, 13, of Beverly was among the students who built a water filtration system at Kellogg and was shocked to learn about the living conditions of those without readily available water.

"I was intrigued by how long it takes them [girls and women] to get water," she said.