TBT: Here's What The Jeff Park Transit Center Looked Like When It Opened

CHICAGO — On Jan. 30, 1970, Mayor Richard J. Daley joined a throng of city officials to celebrate the extension of the Kennedy Rapid Transit Line — known today as the Blue Line — from Logan Square to a new station in Jefferson Park.

"Leave your car at home, help to reduce pollution, and ride the CTA," Daley told gathered media that day, according to Tribune archives.

The transit center originally served Greyhound buses, a service that today only runs from the Rosemont Blue Line station. Jefferson Park now serves as the nexus of more than a dozen Pace and CTA bus lines, and it remains the only terminal in the city accessible to both Metra and "L" trains.

In 1984, the Blue Line was extended all the way to O'Hare Airport, meaning Jefferson Park was no longer the last stop.

The station was renovated to become wheelchair-accessible in 2000, and another facelift is being planned for next year. 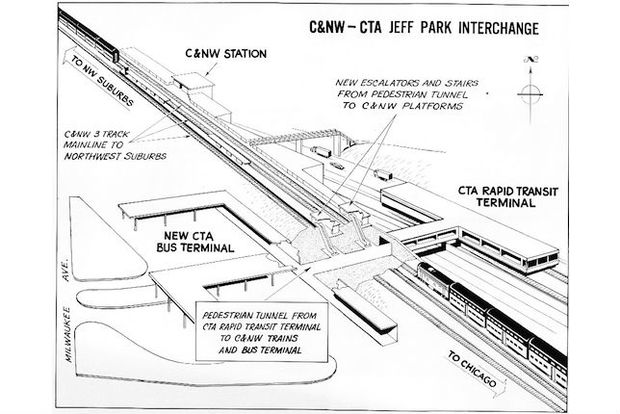 A preliminary diagram of the transit center published in 1969, a year before it opened [CTA via the Northwest Chicago Historical Society]