By Howard Ludwig |&nbspOctober 19, 2017 6:18am | Updated on October 24, 2017 11:20am
@howardaludwig
Twitter Facebook Email More
Terry Herr of Beverly will climb Mount Everest this spring. He's using his trip to raise money for foster children. His Cairn for Kids campaign aims to raise $29,029, which matches the height of the world's highest mountain.
View Full Caption
Supplied Photo

Herr has paired the biggest climb of his life with an effort to raise $29,029 for foster children — a number that matches the height of world's highest mountain.

"This is a big trip. It is something that people don't normally do. So I figure I might as well do something for charity," said Herr, who operates his own wealth management firm Downtown.

All of the proceeds from his fundraising efforts will be given to Children's Home and Aid, a group primarily dedicated to helping foster children. Herr established Cairn for Kids to draw donors to his cause.

Cairn is the name given to a pile of stones used by hikers and climbers to mark a trail. Herr's charity had raised $2,650 as of Wednesday morning.

"Children in foster care need cairns in their lives to help guide them on their path. Children’s Home and Aid is a key agency supporting the journey of foster children," Herr's charity website states.

Herr is also hosting a murder mystery dinner to raise money for his charity. Midnight at the Masquerade will begin with cocktails at 6:30 p.m. Oct. 28 at the American Legion Hall in Evergreen Park.

It costs $65 per person to attend the dinner show at 9701 S. Kedzie Ave. or $480 for a table of eight. Herr has hired an acting company staffed with many Second City alumni to put on the show that relies heavily on audience participation and improv.

Herr was raised in Pontiac, Ill. He is the youngest of 10 children and fell in love with the outdoors when his father bought 12 acres near their downstate home. The wooded property was unsuitable for farming but perfect for camping, family parties and more.

He began rock climbing and doing some intense backpacking shortly after graduating from Loyola University in 1993. As time went on, he became more and more interested becoming an alpinist or mountain climber.

"It's just you up there making decisions," said Herr, who has lived in Beverly since 2004. "When you grow up with 10 kids, you always ask, 'Was that me? Or was that all the people that helped me?'"

It's this same mindset that drew Herr to the cause of foster children — many of whom do not have the same support system he enjoyed. He was also made aware of Children's Home and Aid by his wife, Carla.

As a member of the Beverly Hills Junior Woman’s Club, she led a drive last year that collected more than 700 pieces of luggage for foster kids. The luggage drive was meant provide a bit of dignity for these children who move an average of eight times throughout their childhood.

Foster children rarely have luggage, so their few belongings are often thrown hastily into garbage bags as they head out the door, said Herr, who added that providing a suitcase is intended to make the experience a bit less jarring.

Carla Herr won the USA Today Make A Difference Day Award for her efforts and directed the $10,000 prize from Newman's Own to Children's Home and Aid.

"None of these kids had what I had," said Herr, pointing to his own upbringing. 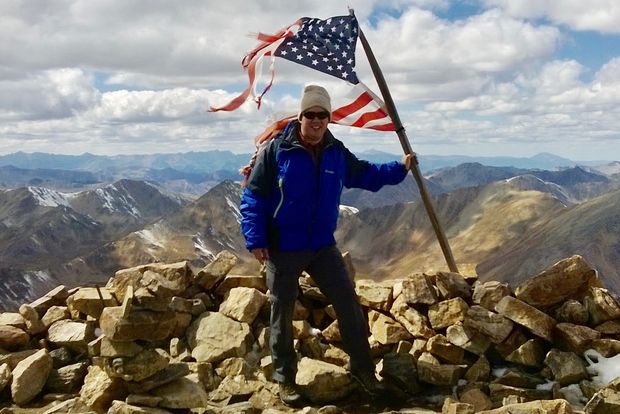 Terry Herr of Beverly poses atop a mountain with a flag that was left there from a previous climber. Herr plans to climb Mount Everest in the spring. He is raising money for foster children via a charity he created called Cairn for Kids. [Supplied Photo]

As for the climb, Herr expects to be away from home from May 4-June 1. He'll start by making the ascent to Everest Base Camp. The camp in Nepal is at an altitude of 17,598 feet and takes 13 days to reach.

"At 13,000 feet is where I really start to feel altitude," said Herr, who added that labored breathing and fluctuations in his heart rate are noticeable at such heights.

He's a bit nervous about the climb but also confident he'll be able to accomplish his goal. He further believes that the experience sets a solid example for his 8-year-old son, Grayson, who is in third grade at Christ the King School.

And even if he doesn't reach the summits, he will still have raised a good amount of money for a charity he firmly believes in.

"I don't lose no matter what happens," he said.