By Howard Ludwig |&nbspOctober 18, 2017 6:23am
@howardaludwig
Twitter Facebook Email More
Amanda Ciura holds her 15-month-old son, Caleb, Tuesday at the Moms of Preschoolers at Beverly meeting. The weekly meeting included an address from six representatives from the public elementary schools in the 19th Ward.
View Full Caption
DNAinfo/Howard A. Ludwig

BEVERLY — Representatives from six public elementary schools in the 19th Ward gathered Tuesday to make their pitch to a group of preschool parents.

The principals, teachers and others sat in a semicircle and spoke to the roughly 25 members of the Beverly chapter of Mom of Preschoolers. The group meets from 9:15-11:15 a.m. Tuesdays at the Beverly Covenant Church.

The meeting at 10545 S. Claremont Ave. focused mostly on the programs offered at each elementary school. Representatives spoke about what makes them unique and answered some questions from the crowd.

"Some moms have no idea what is even available in the community," said Rosie Ballard, a North Beverly resident and a coordinator of the preschool moms group. 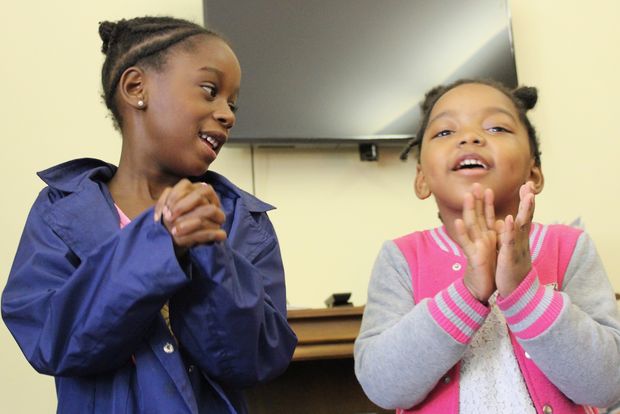 Azaria Butler (left) plays with her cousin Jasira Cherry Tuesday after a meeting of Moms of Preschoolers. The group meets from 9:15-11:15 a.m. Tuesdays at the Beverly Covenant Church. [DNAinfo/Howard A. Ludwig]

Ballard sends her two children — Imani, 7, and Nia, 5 — to her neighborhood school, Kellogg Elementary. She reached out to Kellogg's Principal Cory Overstreet last year to arrange a similar meeting.

This year, the meeting was expanded to also include representatives from Barnard, Clissold, Esmond, Sutherland and Vanderpoel schools. Only Barnard and Esmond offer preschool programs. The others spoke about their kindergartens.

"Promoting and marketing is a huge part of the job now," said Overstreet, who regularly hosts open houses and other events to draw would-be parents and students into his school at 9241 S. Leavitt St.

His public school is across the street from Christ the King School. The public and Catholic schools have co-existed for roughly 80 years. Still, Overstreet believes most of his competition comes from magnet schools.

"I think a lot of people knew their kids were going to [Christ the King] the moment they were born," said Overstreet, who believes the neighboring school's students often come from families with a long history of supporting Catholic education.

Beverly's Catholic schools also have a long tradition of recruiting students, and Overstreet said he's relying on a similar approach to attract new families who settle in the neighborhood and are considering public schools.

To that end, Kellogg was mentioned in a recent article from Crain's that points to strong public schools as a reason for Beverly's soaring housing market. 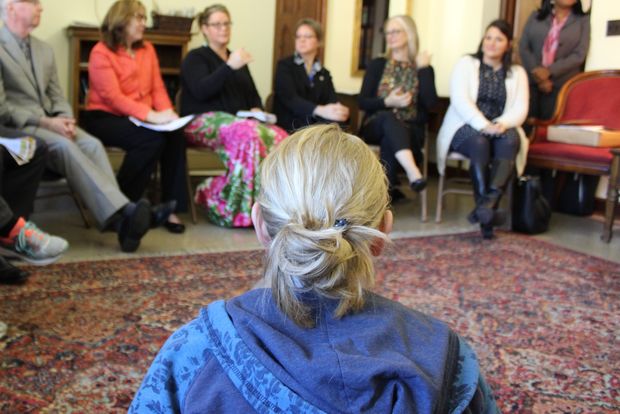 A parent listens as representatives from six public elementary schools in the 19th Ward talk about the various programs offered at their schools. The meeting was hosted by the Moms of Preschoolers Tuesday morning at the Beverly Covenant Church. [DNAinfo/Howard A. Ludwig]

Amanda Ciura of Evergreen Park attended the meeting with her 15-month-old son, Caleb. Though her children do not attend schools in Chicago, she still found the meeting helpful, including the suggestion that parents look into the Beverly Arts Center for activities for elementary school students.

Aziza Butler of Kenwood has been attending meetings of the preschool parents group for the past six years. She too picked up several tips that she believes will prove helpful as she navigates the Chicago Public Schools system.

She also appreciates the social aspect of the Beverly moms group, as she admitted that parenting can sometimes feel isolating. And discussions like those offered Tuesday are refreshing ways to engage with other adults.

"Every week we have a different topic of discussion," she said.