DOWNTOWN — Anish Kapoor hadn't seen "The Bean" since he introduced his sculpture 11 years ago in Millennium Park.

So naturally, he took a selfie Tuesday during his first trip back to Chicago — just as countless Chicagoans and tourists have before him.

"It’s taken another persona, and that’s one of the keys of public art: It can catch a certain kind of public imagination, public participation."

Kapoor is back in town to accept the Grant Park Music Festival’s Advocate for the Arts Award. The occasion marks the first time the Londoner has been in Chicago since "Cloud Gate" debuted in 2006.

Back then, Millennium Park was a somewhat recently redeveloped rail yard and not the most popular tourist destination in the state. Apple wasn't selling iPhones. And "selfie" wasn't in the dictionary. 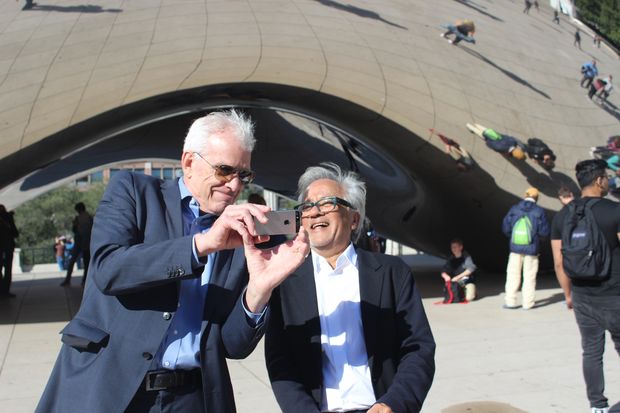 Kapoor said he developed the idea while sitting on a bench for "four or five days" where "the Bean" now sits. He said he always wanted to make something popular.

The sculpture's stainless steel skin hides an internal skeleton with flexible connectors that allow it to expand and contract during Chicago's extreme weather. The 33-foot-tall, 42-foot-wide "Bean" reportedly cost $23 million.

"The fact that there’s no joints means that there is an indeterminate quality about whether it’s a big thing or a small thing," Kapoor said Tuesday. "It's both. To those buildings it's a small thing. Those kind of things reappeared to me [Tuesday]." 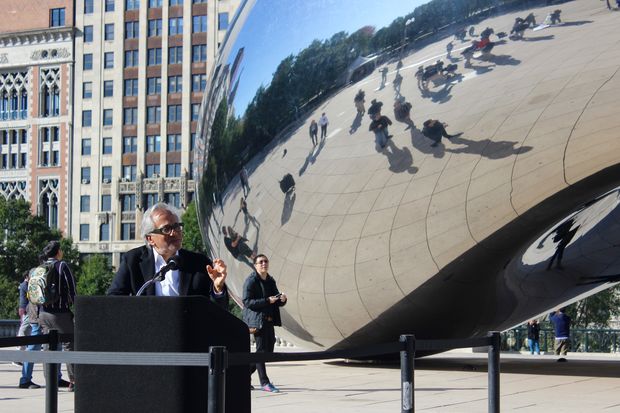 Anish Kapoor addresses reporters Tuesday at the site of his sculpture, "the Bean." [DNAinfo/David Matthews]

Now, along with other tourist hot spots including Lurie Gardens, Crown Fountain and Jay Pritzker Pavilion, "the Bean" has helped draw millions of people to Millennium Park, which city officials say is now the most visited place in the Midwest.

"This was a hole in the ground, an eyesore," said Mark Kelly, commissioner of the city's Department for Cultural Affairs and Special Events. "I don't think any of us had any idea [Millennium Park] would become what it did."

Kapoor's visit arrives amid the city's Year of Public Art, an endeavor to install exciting new art in all of Chicago's neighborhoods.

Kelly pointed to the upcoming Kerry James Marshall mural of Chicago women at the Chicago Cultural Center and a forthcoming "public art plan" as progress.

Kapoor said he can't take credit for all the selfies at his sculpture. But he's proud of what "Cloud Gate" has become.

"Perhaps the work does have a certain mystery: that even though you visit it and see it and reflect yourself in it, you can’t quite hold it fully," he said. "And maybe that’s why you come back."

Public Art Coming To 'Every Nook And Cranny' In Chicago, Mayor Says

The Bean or Cloud Gate? We Found Something All Chicagoans Agree On