Rather, the Chicago Blackhawks Hockey Rink is an outdoor rink at Kennedy Park. It measures 80 by 175 feet and is designed specifically for players wearing gym shoes and roller blades.

Mayor Rahm Emanuel and other dignitaries cut a ribbon Friday afternoon at the rink at 11320 S. Western Ave. in Morgan Park. It replaces a tennis court and two other makeshift outdoor rinks.

Ryan Hartz, 12, said the new rink is a vast improvement over the previous hockey set-up where the hockey balls would often roll under the fence and elevated shots would fly out of play.

The boards and fencing around the new rink solves such issues and the SportCourt playing surface also makes for fast play on roller blades, according to Hartz's brother, Danny.

The Morgan Park siblings represented their youth hockey club, the St. Jude Knights, at the unveiling. Others wore Chicago Blackhawks or Horned Frogs' jerseys — the latter representing the start-up youth hockey program based out of the nearby Morgan Park Sports Center.

"It's so much better playing on this than the old court," Hartz said. 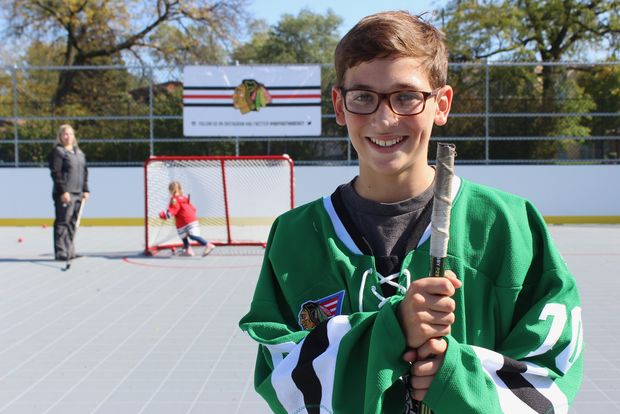 Ryan Hartz, 12, of Morgan Park played hockey at Kennedy Park for years before the new Chicago Blackhawks Hockey Rink opened Friday. But those makeshift rinks pale in comparison to the new rink unveiled Friday, he said. [DNAinfo/Howard A. Ludwig]

The National Hockey League’s Industry Growth Fund picked up the roughly $250,000 tab for the new rink, according to an official with the Chicago Park District. This special fund is earmarked to promote youth hockey and is allocated through the league's collective bargaining agreement.

The park district will design programming for the rink, but it will also be open for neighborhood children to simply show up and play on a whim. Jamal Mayers played in the NHL for 15 years and said he fell in love with hockey through such pick-up games.

"You never know, one day you might see one of these kids becoming a Chicago Blackhawk," said Mayers, who now works as a hockey analyst on Comcast Sportsnet.

A similar outdoor rink is planned for Edison Park on the North Side. Construction there is expected to begin in the spring, as several community concerns needed to be addressed before moving forward, the park district official said. 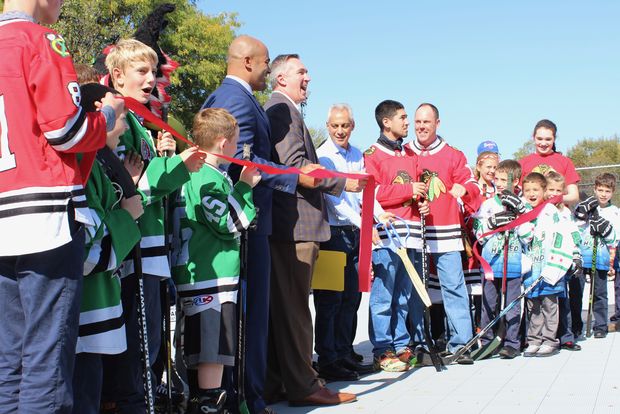 This same official also said the Blackhawks are planning to open a total of five such rinks via the NHL's special fund. And that there's been some discussion about adding lights to the rink at Kennedy Park, too.

"Thank you from the South Side," O'Shea said. "This rink will be used by the children of Beverly, Morgan Park and Mount Greenwood."