RIVER NORTH — It could be last call for more alcohol in River North.

The City Council voted Wednesday to prohibit new liquor licenses in much of the neighborhood long known for its nightlife.

Citing an "over-concentration" of bars in the area, the new law introduced by 42nd Ward Ald. Brendan Reilly seeks to prohibit new watering holes in wide swaths of River North. 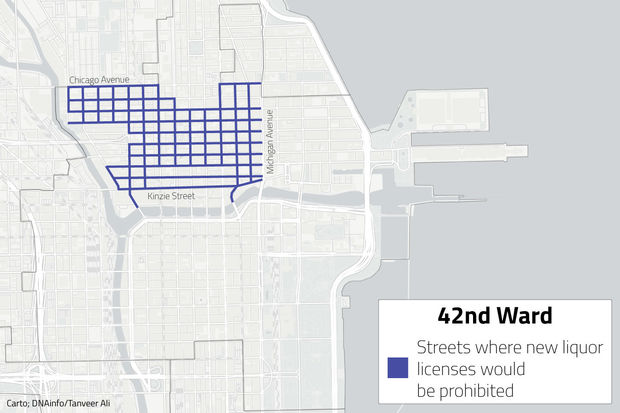 The ordinance only applies to new bars that make most of their money off booze, not other businesses such as hotels, restaurants or music venues that also sell drinks. Existing River North bars will not be affected.

Reilly, who didn't return messages seeking comment, for years has told neighbors he frowns on granting tavern licenses to new bars that he said attract drunken mischief to River North.

Lilia Chacon, a spokeswoman for the city's Department of Business Affairs and Consumer Protection, said there already are moratoriums in the ward with regard to bars, liquor stores and late-night clubs. Any liquor licenses recently granted in the ward have gone to restaurants and other businesses with incidental drink sales, she said.

A new ordinance would make those restrictions more permanent in River North.

"There is a delicate balance between residential, business, hospitality and tourism objectives in our very dynamic neighborhood," Mike Riordan, president of the River North Residents Association, said in an email. "We work extremely hard to advocate for quality of life issues and to collaborate with business owners so that we all thrive. "

Reilly filed the proposed ordinance last month as he wages a war of words with Bottled Blonde, the polarizing restaurant/club at 504 N. Wells St. that draws big crowds, riling some neighbors. The bar is now subject to disciplinary hearings at City Hall amid questions about whether it's violating its license.

Aldermen approved the ordinance without debate Wednesday after a City Council committee unanimously approved it Tuesday.

Reilly's ward has more liquor licenses than any other in the city, with 201 licenses categorized for tavern, late-night or liquor store service.

"Clearly, the alderman feels his ward has reached a saturation point," Chacon said.

Bottled Blonde Gets Reprieve After Its Attorney Is Jailed, Fired

How Does A Bar Lose Its Liquor License? Bottled Blonde Faces Test Tuesday