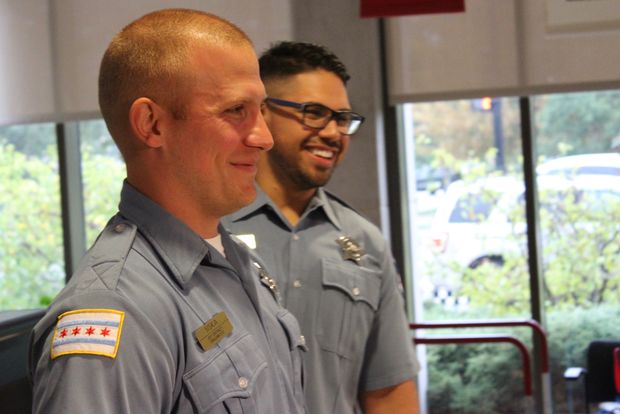 Officer Joe Siska helped Edward Hensley to an aid station Sunday when he collapsed with about two miles left to go in the 26.2 mile race. Probationary Officer Alfredo Martinez was also stationed nearby.

"He was on the ground trying to sit on the curb. I could tell he was in a lot of pain," said Siska, who works in the Morgan Park District on the Far Southwest Side.

A marathon volunteer offered Hensley, a resident of suburban Bartlett, a wheel chair, which he staunchly refused, saying his marathon would be voided if he used it. This immediately struck a nerve with Siska.

Hensley later attempted to re-enter the race, not knowing the extent of his injuries. Martinez watched Hensley hop on one leg for a bit only to stumble again. He then helped the defeated runner back to the aid station.

A Mount Greenwood resident, Siska returned to check on Hensley about 40 minutes after he first helped him to the side of the course.

With that, Hensley's face changed and the pair began walking the remaining two miles together. Martinez, also a Mount Greenwood resident, soon joined in. It took about two hours for the three men to complete the course.

"I am telling you with strong confidence that any police officer that would have been at my post would have done the same thing," Siska said.

Along the way, the trio asked another officer stationed along the route for use of his folding chair. Hensley used it as a type of cane or crutch. He completed the race in six hours, 47 minutes, according to official marathon results.

Siska said he focused conversation on the runner's past marathons as well as his own experience as an expectant father as a way to distract Hensley from his the injury.

"I can't imagine the pain he was in for those two miles," Siska said.

Meanwhile, runners along the course were patting the men on the back and offering to help. It was a particularly moving experience for Martinez, who has just four more days before his probationary status expires and he becomes an fully-trained officer.

Hensley later sent text messages to the officers saying he had fractured his hip. The injury was surgically repaired at Northwestern Hospital. He is hopeful that it will heal as expected, Siska said.

Both Siska and Martinez said meeting Hensley's family at the finish line was reward enough. Neither men said they were prepared for being in the spotlight. In fact, Siska only told his wife about his experience after his picture started popping up on Facebook.

"I've always believed that if you do a good deed, you keep it to yourself," said Siska, who added he knew very little about the race before being assigned to his post in the South Loop.