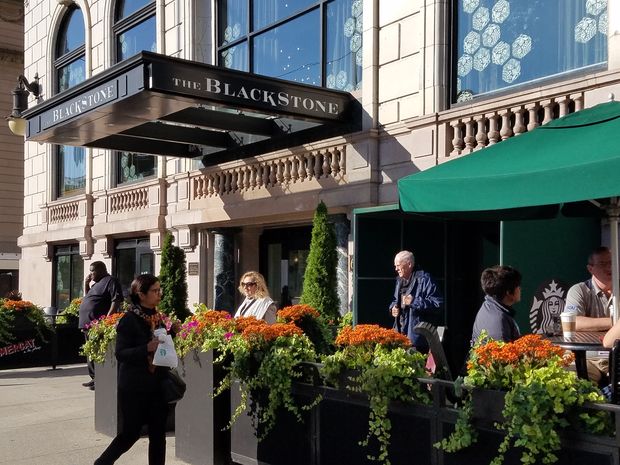 CHICAGO — Stephen Paddock, the man behind the mass shooting that left more than 50 people dead and 500 wounded in Las Vegas, booked hotel rooms that overlooked Lollapalooza in Downtown Chicago, a source confirmed to DNAinfo.

TMZ first reported that Paddock booked two rooms at the Blackstone Hotel, which has a view of Grant Park — where Lollapalooza is held — before and during the festival in early August. A source confirmed the information to DNAinfo.

The festival draws 400,000 people to Grant Park over four days each summer.

Citing anonymous sources, TMZ said Paddock had never before booked a room at the hotel but requested a "view room" that would face Grant Park.

Paddock never checked into the hotel rooms, though, according to TMZ's sources.

In a statement, Blackstone confirmed a person made a reservation under the name Stephen Paddock, but the guest did not stay at the hotel and authorities have not confirmed if the guest was the same man behind the shooting in Las Vegas. The hotel is cooperating with authorities.

Jennifer Bowser, a professional photographer who has taken photos of Lollapalooza's crowds from the Blackstone Hotel, said she thought of Lollapalooza as soon as she heard about the shooting in Las Vegas. 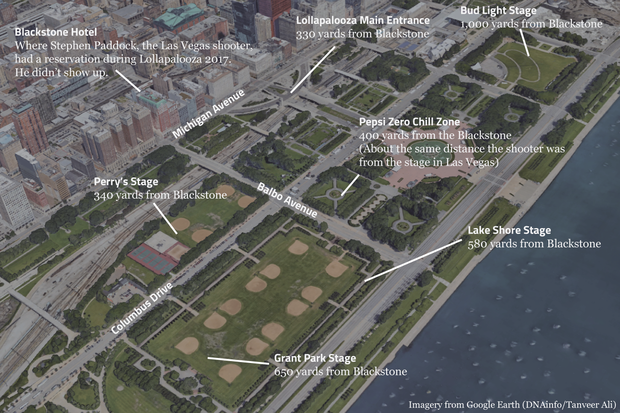 RELATED: Chicago Student In Las Vegas During Shooting: 'It Was Very Surreal'

That's because the festival brings together such a large group of people, and she's seen an evacuation there take more than an hour, Bowser said. Hearing about the gunman booking rooms at the Blackstone, she felt "scared."

"You can pretty much see the entire festival, which is why we go there," Bowser said. "I would be nervous and hesitant to go back [to Lollapalooza]. I would think twice about it because I do think it's a potential target, especially with all of the tall buildings around."

Bowser has taken photos from the 20th floor of the hotel and said the rooms gave her a clear view of an entrance and exit to the festival off Michigan Avenue. She said she hopes the Blackstone and hotels will be more aware of who is booking those kinds of rooms during future events.

Bob O'Neill, president of the Grant Park Conservancy, said he was thanking God a shooting like that in Las Vegas did not occur in Chicago. He said officials have to be "more and more aware" of safety and increase security.

O'Neill noted the Blackstone isn't as tall as the hotel in Las Vegas and the view to Lollapalooza is partially blocked by trees, though he also thought of the large music festival "immediately" after the shooting in Las Vegas.

"What scares me is we're lucky we haven't had this, this type of thing in Chicago," O'Neill said. "Since the '68 riots there's a level of security at these events that's really intense in Chicago.

"But it's a wake-up call. We have to be prepared. Grant Park hosts huge events and we can never be lax about security."

Police have held six drills to prepare for an attack like the one in Las Vegas, and security has been increased for this weekend's Chicago Marathon.

We are aware of the media reports and have been in communication with our federal partners," Chicago Police Department spokesman Anthony Guglielmi said. "As you saw earlier this week, the city conducts extensive public safety planning and training around major events, in close coordination with our law enforcement partners, to ensure public safety."

Just two months after Lollapalooza, Paddock checked into Mandalay Bay Hotel in Las Vegas. As a country music festival took place nearby, Paddock broke two windows in his hotel room and fired shots at the festivalgoers.

So far, 58 people have been confirmed dead from Sunday's shooting. Paddock's motive remains unknown. The shooting is the deadliest in modern U.S. history.

Here's a view of the Lolla crowds from the Blackstone Hotel:

We are aware of recent media reports concerning Chicago and the Blackstone hotel. Statement below: pic.twitter.com/IuI3otUYgc