Is There A Cancer Cluster In This Neighborhood? Study Seeks Answers

By Howard Ludwig |&nbspOctober 4, 2017 6:30am | Updated on October 4, 2017 8:27am
@howardaludwig
Twitter Facebook Email More
The Beverly Breast Cancer Walk is one of the most popular events in the 19th Ward. Held on annually on Mother's Day, the event draws many participants who have been impacted by cancer in some way.
View Full Caption
DNAinfo/Howard A. Ludwig

MOUNT GREENWOOD — A study of reported cancer cases in Beverly, Mount Greenwood and Morgan Park along with two neighboring suburbs did not reveal a "cancer cluster" but offered other insights.

The study from the Illinois Department of Public Health looked at cancer rates for the 19th Ward ZIP codes of 60643 and 60655. Also included in the findings were reported cancer rates in Evergreen Park's 60805 and Oak Lawn's 60453.

The study amended late last month was called for by state Sen. Bill Cunningham (D-Chicago) and state Rep. Fran Hurley (D-Chicago). Both heard from constituents concerned after several recent cases of childhood cancer were reported on the Far Southwest Side.

Dr. Moira McQuillan of Little Company of Mary Hospital in Evergreen Park echoed the concerns and was equally moved by the heartbreaking stories of Beau Dowling, Elliot McGann, Emily Beazley, Anthony Pappalas and others.

"The state analysis did not identify a cancer cluster," Cunningham said Monday. He and McQuillan were relieved to find no glaring evidence of elevated pediatric cancer rates in the area. This group is officially defined as cases in people up to age 19.

But many questions remain in the wake of the report. And the findings did reveal several types of cancer among certain populations that were elevated throughout the four ZIP codes. The findings include:

• Malignant breast cancer among women younger than 50 years old of all races in the four ZIP codes was unpredictably high, with cases 288 cases observed, compared to 235 expected, according to an amendment to the report shared with Cunningham.

Breast cancer among women in this age bracket was particularly elevated in the 60643 ZIP code, with 110 observed cases versus 78 expected, the amendment said. And invasive breast cancer rates in black women were also elevated throughout the area, with 474 cases reported, compared to 410 expected, according to the original report.

• Uterine cancer in white women throughout the region was also higher than expected with 253 cases reported, compared to 214 expected. 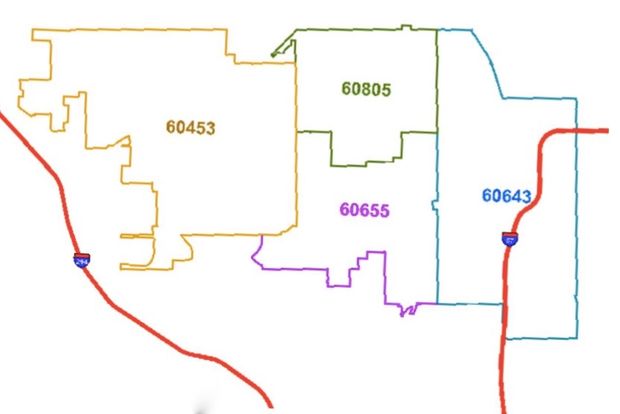 A recent analysis from the Illinois Department of Public Health looked at cancer rates for the 19th Ward ZIP codes of 60643 and 60655. Also included in the findings were reported cancer rates in Evergreen Park's 60805 and Oak Lawn's 60453. [Supplied Illustration]

The study looked at cases reported between 2005-2014 — the most recent data available.

But both also acknowledged the Far Southwest Side is a tight-knit community, and stories of childhood cancer are often spread widely via social media. So increased awareness of these pediatric cancer cases could give the false impression that such incidents are on the rise, the pair said.

"You can't deal with anecdotal evidence in something like this," Cunningham said.

The study from the state's Division of Epidemiologic Studies also did not provide any theories as to environmental causes for the types of cancer that saw higher than expected cases being reported.

McQuillan said there are several known environmental causes, such as radon, that could drive up cancer rates as well as other behavioral causes including smoking, increased alcohol consumption and more.

But neither she nor Cunningham offered any reasoned theories about the causes behind the types of cancer that were elevated throughout the region. And both hoped the area will be part of the "Chicago Multiethnic Prevention And Surveillance Study."

The study, led by researchers at the University of Chicago Medicine Comprehensive Cancer Center, was not prompted by the recent state analysis, according to one researcher. But the study investigates why cancer and other diseases, including diabetes, cardiovascular and respiratory illnesses are elevated in some areas and not others.

"This is something that really requires a more detailed study," Cunningham said. "The numbers we have right now, we are kind of frustrated by."