JEFFERSON PARK — The chipped gray viaduct that bisects the main drag of Jefferson Park was bathed in purple light Tuesday night, teasing an intricate LED display that could become permanent if it scores enough votes in the 45th Ward participatory budgeting process this fall.

The ballot, which asks residents to decide how Ald. John Arena (45th) should spend his 2018 discretionary budget of $1.3 million, will be released by Friday, according to Arena's staff. But on Tuesday, before the full catalog of potential infrastructure projects becomes available to voters, volunteers ignited a shimmering preview of one of their voting options.

Neighbors have spent years pleading for Jefferson Park's multiple crumbling railroad underpasses to be rehabilitated, according to a Dominika Miller, a Jefferson Park resident who volunteered to help the alderman's office draw up the ballot.

The group of volunteers settled on an effort to beautify the Metra viaduct just north of the Jefferson Park Transit Center on Milwaukee Avenue. But the underpass' stucco walls make it a poor candidate for paint, so one neighbor suggested a light show similar to the display that debuted last year under the "L" tracks in the Loop, Miller said.

"I live nearby there and walk through that underpass frequently, and it's not a pleasant experience," Miller said. "We thought [the lights] could bring a little color and life to that area, and add a bit of a more pleasant look for people going to the Jefferson Park business district."

The volunteers enlisted Intelligent Lighting Creations — the same company behind last year's Downtown display — to test the experience in Jefferson Park, Miller said. The two-hour trial balloon was designed to determine how much the lights would cost to make permanent. 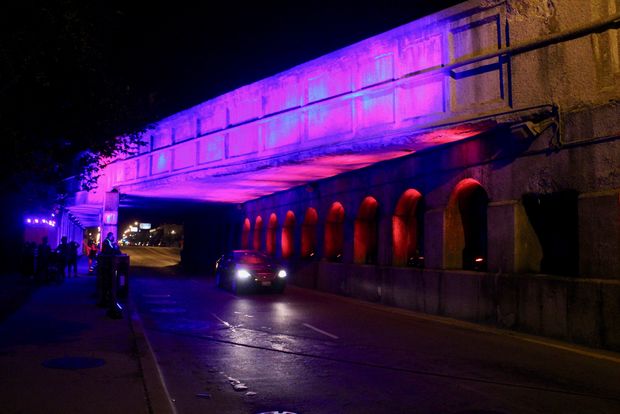 The display is one of a handful of measures aimed at boosting enthusiasm for the participatory budgeting process, whose last round Arena skipped due to flagging participation. The alderman's staff will also accept online votes for the first time this year, they announced.

Each ward's discretionary budget is dedicated to infrastructure projects, with about half typically slated for road re-paving. Ald. Joe Moore (49th) was the first to invite constituents to vote on how to spend the annual sum, and since then a handful of other aldermen, including Gilbert Villegas (36th) and Anthony Napolitano (41st), have followed suit.

Mark Hansen, who lives in the 5700 block of West Goodman Street, called the display "stirring" when he walked through it Tuesday.

"From the outside it seemed a little goofy, but once you get into the tunnel it's sort of a reverential experience," Hansen said, adding that he would consider voting for the proposal.

Not everyone shared Hansen's enthusiasm. When Miller described her idea on social media, it generated "a lot of excitement, both good and bad," she said.

But that's why the proposal is being turned over to the public, she added.

"If someone doesn't like the project, they should vote against it," Miller said.

The voting process is set to open on Oct. 16, with the last ballots accepted Oct. 28.