Tribune Printing Plant Site May Be Redeveloped Into Riverside Neighborhood

DOWNTOWN — Tribune Media has a big plan to redevelop the site of its riverfront printing press, even though it doesn't have a developer yet.

The onetime owner of the state's largest newspaper unveiled its vision Wednesday for the Tribune's Freedom Center at 700 W. Chicago Ave. Dubbed "the River District," the massive project calls for more than a dozen new buildings spanning more than 9 million square feet and 5,900 new homes along the north branch of the Chicago River.

Plans also call for an extension of the Downtown Riverwalk and a new street connecting Grand and Chicago avenues in River West.

If built, the development would accommodate more than 19,000 permanent jobs and contribute about $1.1 billion in new property taxes over the next 20 years, Tribune Media said.

"We view the River District as a major contributor to the future success of the city,” Murray McQueen, president of ‎Tribune Real Estate Holdings, said.  “The River District plan leverages best practices from Chicago and other major cities and reflects how people want to live and work today. Our goal is to create the same in-demand dynamic neighborhood seen in tech centers such as San Francisco and Seattle.” 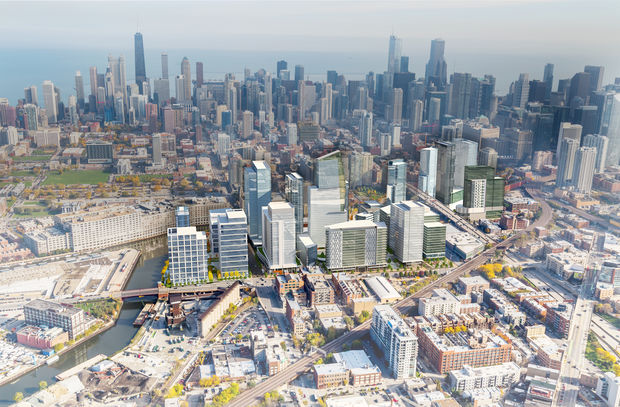 An aerial rendering of the project [Solomon Cordwell Buenz]

The company announced its plans a month after unveiling a four-tower development nearby at 700 W. Chicago Ave. Tribune Media spun off the Tribune and other publications in 2014, but kept the newspapers' real estate holdings. Tribune Media sold the Tribune's namesake tower on Michigan Avenue to a developer last year.

The company's plans for the paper's printing plant have been years in the making. Tribune executives met with 27th Ward Ald. Walter Burnett to discuss the future of the Freedom Center in 2013, but talks were stalled by the area's zoning, once centered around manufacturing. City officials signed off earlier this year on sweeping zoning changes in and around Goose Island allowing for high-rise office and residential construction.

The project would "create the city’s first innovation district and become a city within a city, where people will live, work, play and innovate,” McQueen said.

The 37-acre site would be redeveloped in phases, beginning with an 18-acre plot at the south end of the property in 2020, Tribune Media said. The Tribune's lease at its printing plant expires in 2023, but has two consecutive 10-year options.

The company still has a few hurdles to jump, however, starting with approval from City Hall. For one, Tribune Media has not secured a development partner to help the company realize its vision.

A Tribune Media spokesman said it has no timeline to select a development partner, but the company decided to file a zoning application with city officials because its plans are "based on our vision for the site, on which we have been working with the city for a number of years.”

Burnett said he believes the site would make a great home for Amazon's second headquarters or anyone else who wants to move in. He has not scheduled a public hearing for the project, which will require the blessing of River West neighbors.

"We always look at it like this: Whether [Amazon] consider(s) it or not, it’s a great marketing tool for whoever owns that property, because now the world knows about it, and that’s a great thing," Burnett said.

The project's renderings were drawn up by Solomon Cordwell Buenz, the big Chicago architecture firm behind the 340 on the Park and Legacy at Millennium Park luxury condo towers, among other projects. 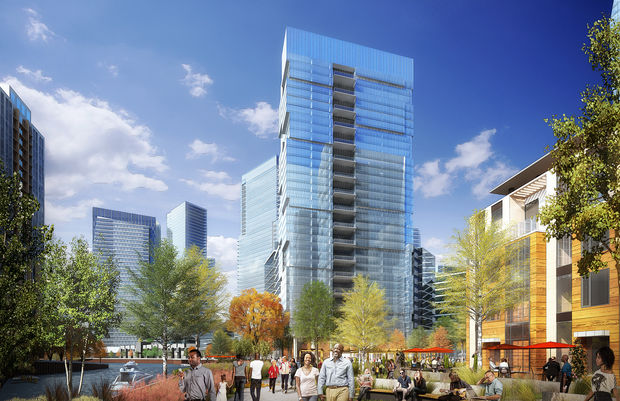 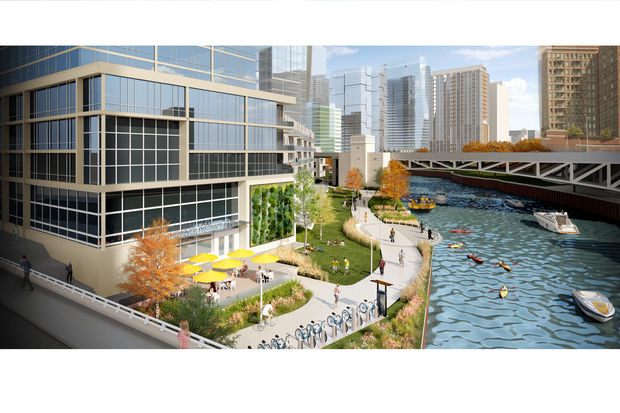 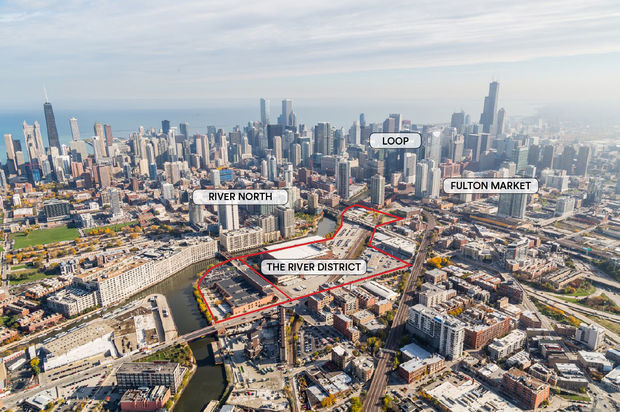 Tribune Printing Plant Could Get 4 New Towers Next Door

What's Going To Happen To Tribune Tower? Developers Weigh In