The 40th Chicago Marathon: Everything You Need To Know

CHICAGO — The 40th edition of the Chicago Marathon steps off Sunday morning. Here's a guide of how to enjoy the massive event.

Before starting the 26.2-mile course, more than 40,000 racers will begin massing at the starting line at Columbus and Monroe in Grant Park around 5:30 a.m.

Start times will be staggered based on classification. Here's when the racers start:

Wave 1 will include the fastest runners, with the winner usually crossing the finish line a little over two hours later.

The largest group of runners will be in Wave 3.

The official post-race party will take place at Butler Field in Grant Park from 9:30 a.m. to 4 p.m., though there will likely be some racers coming in after that.

The race starts in Grant Park, but goes through several Chicago neighborhoods.

Where can I watch it and how can I get around?

The race will be televised on NBC 5, but part of the fun is going out into the neighborhoods, cheering on racers and laughing at clever fan-made signs. 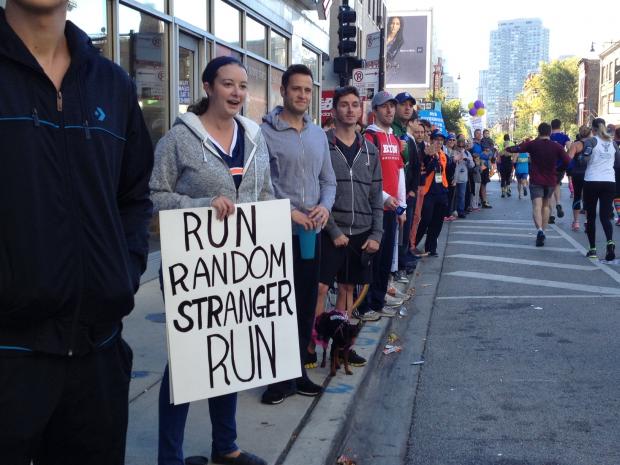 A spectator encourages racers during the 2013 Chicago Marathon. [DNAinfo/Emily Morris]

The "L" is the best way to get around as the CTA will increase service. Roads will be closed off ahead of the marathon, but will be opened up as racers pass through.

Here's a full list (PDF) of road closures and estimated openings due to the race. Some streets had already been closed Downtown as of Tuesday.

If you're tracking a specific racer throughout the day, download the official Chicago Marathon iOS or Android app.

Sunday should be a "mild day," with temperatures hanging around the 60s at the start of the race and hitting a high in the mid-70s, said Ricky Castro, a National Weather Service meteorologist. The marathon is expected to be dry, but there's a chance for rain showers during the afternoon and into the evening for those planning post-run celebrations. Humidity will be low.

"The earlier parts of the race will be comfortable," Castro said.

Will it be safe?

Emanuel said the entire course would be placed in a "security envelope" — and urged Chicagoans to contact authorities if they see something that seems amiss.