By Howard Ludwig |&nbspSeptember 28, 2017 9:03am | Updated on October 6, 2017 8:23am
@howardaludwig
Twitter Facebook Email More
These paintings will be on display at 9911 S. Walden Parkway. The storefront that was formerly home to The Blossom Boys floral shop has been transformed into a pop-up art gallery for Beverly Art Walk on Saturday.
View Full Caption
DNAinfo/Howard A. Ludwig

BEVERLY — South Side storefronts that have sat vacant for months will again spring to life as makeshift art galleries when the Beverly Art Walk returns Saturday.

The fourth annual event takes place from noon-7 p.m. and roughly 250 artists will have their work on display throughout Beverly and Morgan Park, according to Sal Campbell, a co-founder of the Beverly Area Arts Alliance.

Sixty two places throughout the adjacent neighborhoods have agreed to lend their walls to artists participating in the one-day event. Many of those showcasing the work include small businesses, as the free family-friendly event draws more than 6,000 visitors each year.

B-Sides Coffee + Tea in Beverly is among the first-time participants, and the owners are excited to open their new coffee shop at 9907 S. Walden Parkway for the walk. The goal is to use the art walk as a way of introducing the new shop to the public. 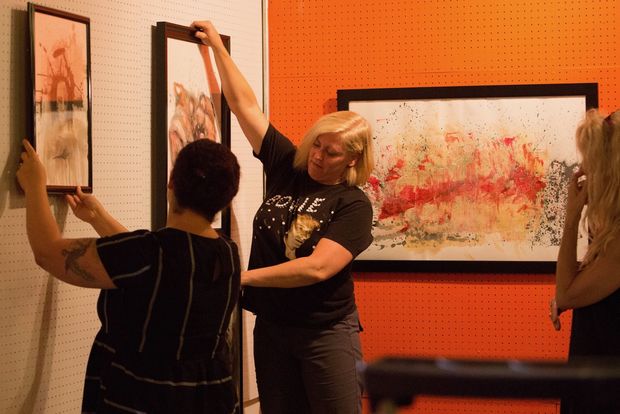 Sal Campbell (center) hangs art at 2133 W. 95th St. in Beverly. The former home of The Beverly Hills Gallery has been overhauled to create a pop-up art gallery for the Beverly Art Walk. [Photo by Russell Ingram]

Participation from small businesses has always been key to the success of the art walk, which Campbell launched along with fellow Beverly resident Monica Wilczak. The pair sought to bring customers in the door as well as create an event that would rally local artists throughout the neighborhood.

The art walk further sought to spur economic development by transforming vacant storefronts into art galleries. Closed retailers including Olivia's Garden, The Blossom Boys and The Beverly Hills Gallery will be overhauled likewise this year.

"The thing that I am always most passionate about are the pop-up galleries," Campbell said.

She and other local artists set up displays last week inside the former gallery at 2133 W. 95th St. in Beverly, and artwork has also been hung inside the shuttered florist shop at 9911 S. Walden Parkway.

Campbell said the pop-up galleries often serve as anchors for the art walk and resulted in more than few permanent tenants moving in after the event that includes three trolleys bringing visitors to the various viewing spots throughout the day.

Other neighborhood artists participating in the walk will invite those on the self-guided tour into their home studios. A peek inside them offers art enthusiasts a rare, intimate glimpse into the artist's world.

Jomo Cheatham of Beverly is among the artists who will open his home to those on the art walk. Cheatham, who lives at 2059 W. 95th St., was among three artists who aimed to put a spotlight on institutional racism in April with a show called "A Constant Struggle" at the Beverly Arts Center. 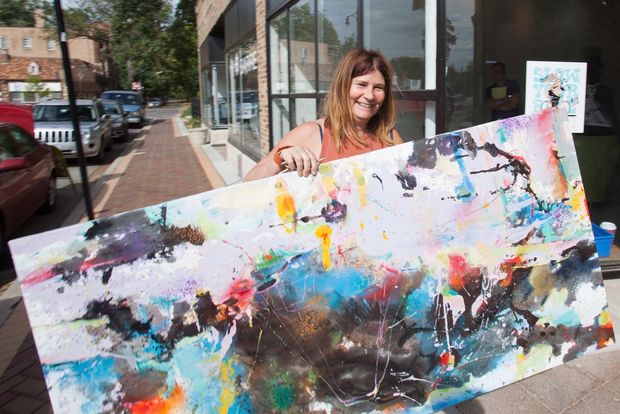 An artist participating in the Beverly Art Walk brings her work to 9911 S. Walden Parkway. The storefront that was formerly home to The Blossom Boys floral shop will be transformed into a pop-up art gallery for the event. [DNAinfo/Howard A. Ludwig]

And not all the artwork on display is temporary. Artist Davis McCarty's color-changing sculpture called "Quantum Me" will debut at 5 p.m. at the art walk. His piece relies on a special plexiglass originally developed for NASA will be set up on the north side of 99th Street, just west of the nearby Metra depot.

The permanent public art display was paid for, in part, by the city's Department of Cultural Affairs and Special Events, which launched its "50x50 Neighborhood Arts Project" June 23. This $1 million citywide effort is designed to bring sculptures, murals and public art installations to all 50 wards.

Campbell gushed about the artists involved this year, some of which come from nearby Blue Island as well as Bridgeport, Pullman and other South Side neighborhoods.

"There is so much happening," she said.

5 open studios on #BeverlyArtWalk 10/7 including the talented Brian Ritchard. Thanks @IngramPhoto for his amazing pics of artists & installs pic.twitter.com/0LpVOV1in1