CHICAGO — A picture of a uniformed Chicago police officer in front of a police cruiser holding a United States flag — standing behind a sign proclaiming "I support my president" — was posted Tuesday to the Chicago Code Blue Facebook page, as a debate over political statements by officers continued to swirl.

Chicago Police Department spokesman Anthony Guglielmi said Wednesday, "As we have said before, the rules prohibiting officers from making political statements while in uniform will be applied consistently. This will be no different."

The original picture was posted the same day Mayor Rahm Emanuel backed the decision of the Police Department to reprimand two officers who kneeled while in uniform even though he defended athletes doing the same during the national anthem before games.

Commenting on the latest photo to emerge, Guglielmi said, "The department will remind all officers about the department's prohibiting political statements while on duty through a roll call training."

Rule No. 42 of the Police Department's Rules of Conduct prohibits uniformed officers from "participating in any partisan political campaign or activity." 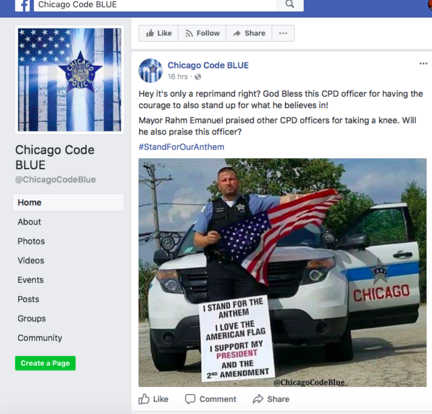 Of the kneeling officers, the mayor said "There is a difference between an athlete wearing their uniform and a police officer, who is paid by the public, wearing theirs."

"You have two very important principles that, here in this particular place, are in conflict," Emanuel said, adding that he was pleased that local activist Aleta Clark felt "comfortable enough" to walk into a South Side police station and discuss the protests with the officers on duty.