Rats On Lakeview Street Out Of Control, Residents Say

Twitter Facebook Email More
A notice posted in the alley on the east side of North Wilton Avenue says the block was last surveyed and baited on Friday. Wilton residents said the rat problem has gotten out of control amid multiple construction projects and irresponsible handling of trash.
View Full Caption
DNAinfo/Jessica Cabe

LAKEVIEW — When John Nydam parks his car at night at his home near the Belmont "L" stop, his first thought is whether he'll be able to get inside his house without crossing paths with a rat.

"Every time I'm walking, I'm nervous," he said. "Every time I park my car after 8 p.m., I have to watch a rat run under my building and under my neighbor's car."

It wasn't always this way on Wilton Avenue, but construction projects like the new Target at Clark and Belmont and the work near Wrigley Field, combined with poorly disposed trash in the alley behind the residences on the east side of Wilton, have led to what neighbors describe as a huge rat problem.

Wilton residents said rats have been an issue on and off since about 2011, but the last two years have been unbearable.

According to data provided by Streets and Sanitation spokeswoman Sara McGann, 11 complaints about rats from Wilton were addressed by this time in 2016. This year, that number has almost doubled, with 20 complaints addressed.

The alley gets the worst of it, but even front yards are plagued by rat holes, and it's not at all unusual to see a handful of rats skittering down the sidewalk in front of homes once the sun goes down. 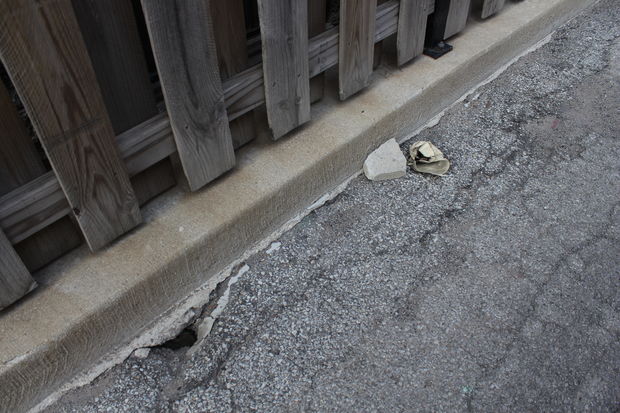 A resident on North Wilton Avenue stuffed a rat hole with newspaper (right), and another hole appeared to the left of it. [DNAinfo/Jessica Cabe]

"You see these giant, deep holes, and if you put a spoon down in there, you can really move it around; it's like a clubhouse," said Ellen Hughes, who has lived on Wilton for 35 years. "Last year, we were coming home late at night, and we were in the alley in our car, and there were three rats up the alley that looked like they were dancing, like in a Disney cartoon. And my husband said, 'Damn it, no frolicking, that's it,' and he went up the alley with poison."

It's not at all unusual for the residents to buy rat poison or pay out of their own pockets for solutions to the problem. Nydam spent $1,000 last year to pour concrete under his porch, which was hosting a rat nest at the time. Hughes "waged war" against the rats that had overtaken the flower garden in her front yard.

"We've spent money, but that's what you have to do," Hughes said. "My neighbors are pitching in to dig between our house and theirs and make a fortress against the rats. We're learning skills we never had to learn before."

Nydam said the block doesn't get enough support from the office of  44th Ward Ald. Tom Tunney or the city.

But Hughes said that while the neighbors used to feel like they were on their own in battling the rats, over the last few months she's seen a lot of support from various agencies, including the CTA, the Lakeview East Chamber of Commerce and Tunney's office.

"One thing I would say about Lakeview is that, yes, we have the problem because we have a lot of new construction, but the good thing here is that I feel like we're really pulling together as a team," Hughes said. "The alderman's office has been really responsive. We have an [special taxing district] office now that's really responsive, the neighbors are all pulling together to kick in and do the best we can, and the CTA is kicking in to help, too. So we have a problem, but I'm proud of the teamwork in Lakeview. We're all trying."

After the meeting, Poelsterl said several actions were taken: The Bureau of Rodent Control was asked to do a comprehensive scheduled application of poison in the alley and individual properties, which it performed within days of the meeting; the Department of Streets and Sanitation surveyed the alley for damaged garbage carts and replaced any carts with rodent holes or missing lids, and it also issued tickets to anyone who violated sanitation codes.

Poelsterl said she personally spoke to the owner and manager of Clarke's, which shares Wilton Avenue's alley, and asked that the dumpsters be locked with chains. Residents said the diner's garbage had contributed to the rat problem. She said Clarke's has complied since their conversation. 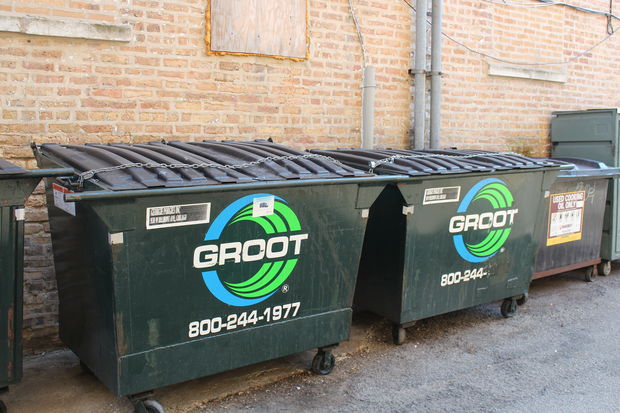 Clarke's, a 24-hour diner at 930 W. Belmont Ave. that shares an alley with residents on the east side of Wilton Avenue, added chains to its dumpsters after neighbors claimed the restaurant's trash was a contributing factor to the increase in rats in the alley. [DNAinfo/Jessica Cabe]

Hughes said she and her neighbors know rodents are a citywide issue, and Wilton Avenue is not the only block with the problem. The number of complaints about rats citywide soared 30 percent between last November and February, compared with the same period a year ago.

According to McGann, the Department of Streets and Sanitation responds to more than 1 million service requests annually, including rodent requests. The department's actions are primarily complaint-driven, so it has been encouraging residents to call 311 to submit rat complaints.

Streets and Sanitation also has ramped up education efforts focused on preventing access to food for rats. If the pests are able to eat freely from poorly maintained trash cans and dumpsters, they will not be drawn to the bait planted by crews.

In addition to poison, dry ice will be used to kill rats now that the method has been approved by the U.S. Environmental Protection Agency.

While there are rumors that budget cuts have led to a recent decrease in the number of city workers fighting rats, the city said it significantly increased its crews last fall — from eight to 18 — when it created the Bureau of Rodent Control.

McGann said rats are going to be a problem anywhere there's construction or poorly maintained trash bins. The best thing for residents to do is maintain clean garbage bins and dumpsters and call 311 to report any problems so a crew can be dispatched to bait the rats.

In addition to those solutions, the neighbors on Wilton Avenue are considering getting feral cat colonies. Hughes has seen progress in her front yard already.

"I know it's a problem, but I don't want us to look like the whiny neighborhood," Hughes said. "It's a citywide problem, and I'm proud of how we're fighting it here. All the different factions have pulled together."