Riverwalk Expansion To Chinatown Could Look Like This [Renderings]

DOWNTOWN — Some of the biggest names in architecture have bold ideas for extensions of the Chicago Riverwalk, and the public is invited to check them out and weigh in.

As part of the Chicago Architecture Biennial that launched Friday, the city has commissioned some of the world's leading design firms to develop ideas for an extension of the riverwalk. The designs are on display at Expo 72, 72 E. Randolph St., beginning Saturday.

The firms were asked to come up with ideas for riverwalks near three locations: behind the Civic Opera House, beneath the Congress Parkway bridge and below the St. Charles Air Line Bridge in Chinatown. After the successful rollout of the popular riverwalk Downtown, the city is ultimately seeking to extend the walk 1.8 miles to Ping Tom Park in Chinatown.

"With the success of our Riverwalk and the four new boathouses we've built throughout the city, we've begun to transform our river into the next recreational frontier, but there is more work to be done," Emanuel said. "This bold initiative will help us imagine new possibilities to further develop our riverfront in ways that will benefit current and future generations of Chicagoans."

Nine architect firms submitted plans for the three locations for a total of 27 designs. After input from neighbors and others, city officials will incorporate the best designs into a long-term plan for the river, said David L. Reifman, commissioner of the Chicago Department of Planning and Development. The exhibit will also travel to neighborhoods, he said.

"We want Chicagoans to be amazed by the creativity and possibilities that will provide for a truly engaging and harmonious Riverwalk experience," Reifman said. "The River Edge Ideas Lab will help create a framework for Riverwalk expansion while getting people excited about the possibilities at the same time."

The River Edge Ideas Lab has launched a website with photos of some of the plans, but not specifics on the design proposals. Below are three designs, one for each site selected. 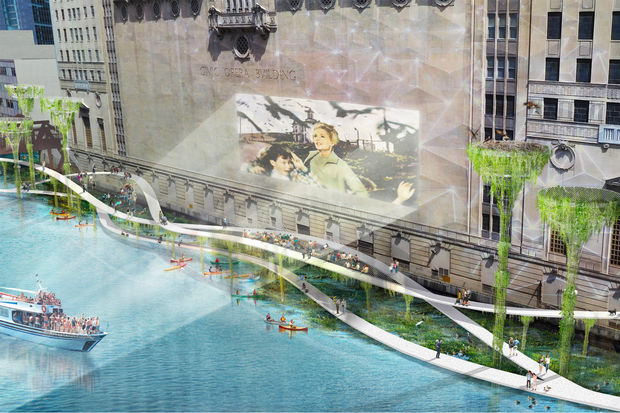 This design by Sasaki Associates shows movies being projected onto the Civic Opera House. Two winding paths would be constructed, one for sightseers and one for joggers and other fast traffic. 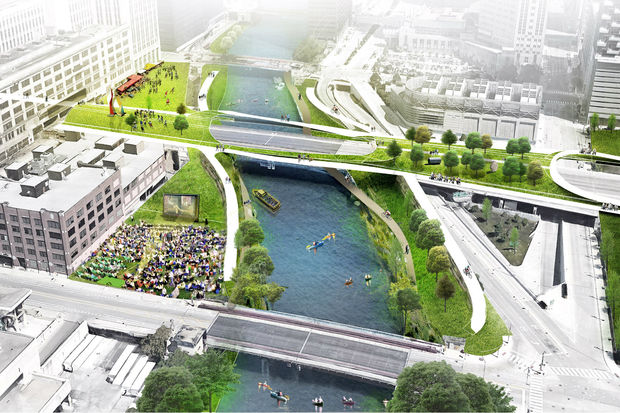 This design below the Congress Parkway bridge would add a natural component to the bridge, as well as a path and green space for movies and other events. 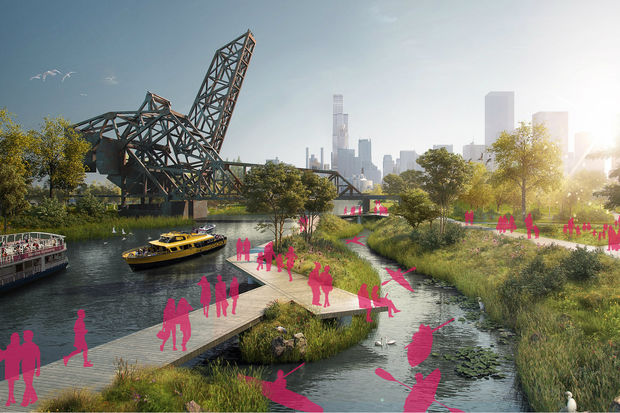 This design for the Riverwalk's extension to Chinatown shows added green space and a walking path both over the river and on land.