BEVERLY — A group of roofing contractors gathered outside of Ridge Park Tuesday morning to survey the aging roof on the sprawling field house at 9625 S. Longwood Drive in Beverly.

Stephen Grant is an architect tasked with handling planning, construction and facilities for the Chicago Park District. He led the contractors around the property, including a tour of the ceramics building at the south end of the park.

A pesky leak in the east dormer of this building will be addressed along with the repairs to the main building's roof, said Grant, adding that the ceramics building was refinished within the past five years.

Grant said he expects construction to begin on the roof projects by Oct. 15. He hopes to receive a minimum of three bids on the work in the coming weeks. In February, a park district official said the roof would be installed in the fall for an estimated cost of $800,000.

Grant said the project is dependent on the weather. But if all goes well, he expects the new roof to be finished by Dec. 15. The project will also include new gutters, downspouts and clearing of the sewer lines that capture the roof's runoff.

Grant said the roof project will not impact the programs at Ridge Park. 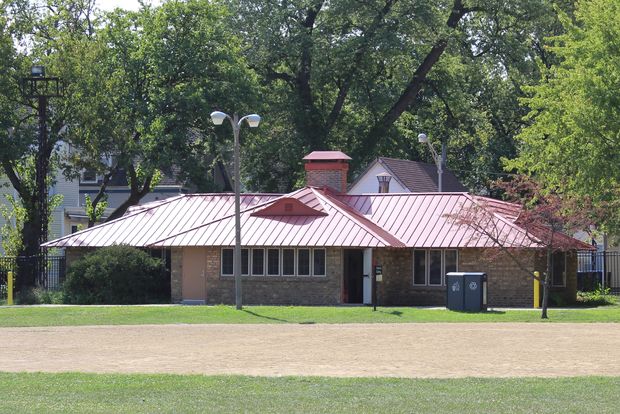 The ceramics building at Ridge Park has a pesky leak in the eastern dormer on the building. The recently refinished building will be fixed along with the sprawling field house roof, according to Stephen Grant of the Chicago Park District. [DNAinfo/Howard A. Ludwig]

The pre-bid walk-through took place on the same day that a letter to the editor and opinion piece were published in The Beverly Review. Both pieces are critical of the park district for not having taken any action on the roof yet.

The opinion piece was authored by members of the Ridge Park Advisory Council. It said the park district verbally promised at its October budget meeting that the roof would be completed in the spring.

Follow-up inquires about the project resulted in a letter from the park district promising the council the roof would be finished by summer, according to the letter signed by council president Mary Jo Viero. The names of a dozen other members of the council are also attached to the letter.

Viero did not provide a copy of the letter. She also works as a community organizer with the Beverly Area Planning Association, which authored the accompanying letter to the editor about Ridge Park's roof.

The letter signed by the neighborhood association's executive director Margot Burke Holland and president Maureen Gainer Reilly also mentions the failed promise of a spring start to the roof work.

Both Viero and Holland remained skeptical despite news of the contractors being at the park Tuesday morning.

"As far as I am concerned, I won't believe we are getting a roof until we get a roof," Viero said. "The whole point of the letter is that promises have been made over and over again."

But Grant remained hopeful that the project will be complete this year — the only timeframe he was aware of.

Jessica Maxey-Faulkner, the park district's spokeswoman, echoed Grant's statement, saying "the project is currently out bid, and construction will begin in the fall as planned."

A letter to the Ridge Park Advisory Council sent earlier this year from the park district's chief operating officer also promises "to replace the roof in 2017."

Grant acknowledged there was failed effort in September 2014 that sought to not only replace the roof but also add new widows, a new heating and cooling system and tuckpoint the brick building that dates to 1913.

Unfortunately, state funding dried up for the $1.9 million project. This time, the park district is paying for the new roof on its own as part of a five-year program to replace weathered roofs throughout the city.

Grant further admitted there's "a tight turnaround" for the job, and he said unforeseen setbacks due to weather and budgetary constraints are always a factor. Still, he believes the project will be finished this year.

""I know there is a lot of interest in this right now," Grant said.