By Ariel Cheung |&nbspSeptember 8, 2017 6:37am | Updated on September 8, 2017 10:16am
@arielfab
Twitter Facebook Email More
Historical Gems And Oddities By The Thousands At Yesterday
View Full Caption

WRIGLEYVILLE — In Wrigleyville, just a block from the home of the Chicago Cubs, rests an unassuming yellow shack where Tom Boyle has found the secret to time travel.

Walk through its narrow door and be transported back through the days of James Dean and Judy Garland, Ernie Banks and Babe Ruth. Step onto worn floors (themselves a relic from the 1950s) and survey stacks of newspapers and magazines, the most impressive of which are displayed proudly from rafters, support beams and the ceiling itself.

Here at 1143 W. Addison St., Yesterday isn't merely a time, but a place where time stands still. The hobby shop has refused to add newfangled notions like credit card machines, computers or, heck, even a cash register since it opened in 1976.

It's harder than it used to be to catch Boyle in the shop. More often than not, it's closed all day. Boyle, 86, has had some health issues over the last year. In late 2015, he was in recovery for months, leaving business up to his longtime compatriot Neil Cooper.

"We're getting to that area now where we are in our closing stages," Boyle said. "Of course, a lot of people want the property. They'd knock this down in 10 minutes, and another high-rise would go up." 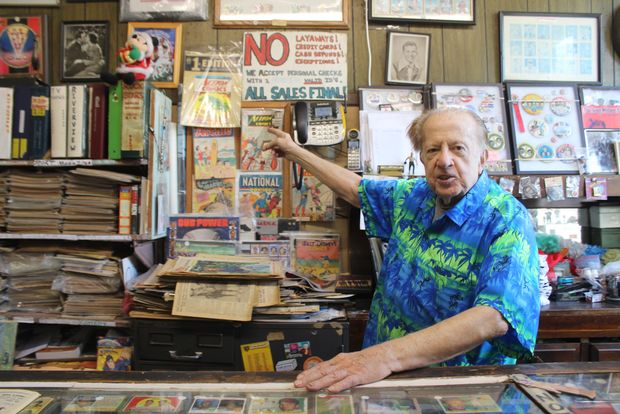 Little has changed in the 41 years that Yesterday has been in business. The antique and sports memorabilia shop has no cash register, no computer — and don't even ask if it takes credit cards. [DNAinfo/Ariel Cheung]

He wants to auction off some of his best stuff, but even if he were to empty the store entirely, "I could probably go home and half-furnish it again," he said.

Still, the tiny shop has had plenty of visitors over the years, attracting celebrities, collectors and tourists from every corner of the globe to hunt through its historic gems curated over 41 years.

"We're probably one of the last stores to carry the variety of stuff that we do," Boyle said.

Variety is an understatement, but it's hard to quantify just how much stuff is packed inside Yesterday until you walk through the store. Every inch of the wood-paneled walls is covered with memorabilia, leaning heavily on Chicago sports and Hollywood's golden age. 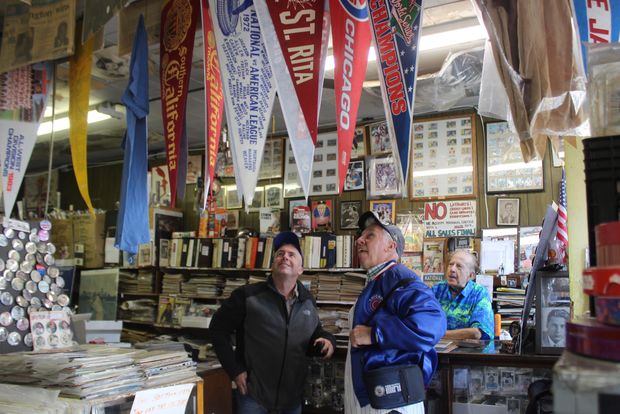 Yesterday store owner Tom Boyle points out one of the historical newspaper issues he has proudly displayed to a couple of Cubs fans on their way to a game. [DNAinfo/Ariel Cheung]

Aside from narrow walkways, there are stacks teetering from every surface available. File cabinets are labeled with popular subjects for treasure hunters: Michael Jordan magazines, Kennedy women and "MM" for the store's biggest seller: Marilyn Monroe.

"Once you're on the screen, you're alive forever," Boyle said.

The thousands of items are sorted, to an extent, but the volume of paper alone would seem to render finding any one specific thing an impossibility.

"Let's put it this way: We know we've got it, but then finding it may take awhile," Boyle said.

Chicago newspapers announcing the end of World War II, the 100-year-anniversary of the Tribune and Lyndon B. Johnson's election dangle prominently from the rafter that Boyle faces from his seat behind the counter. From there, he'll trade war stories (sometimes literally) with customers who wander in, often on their way to Wrigley Field. 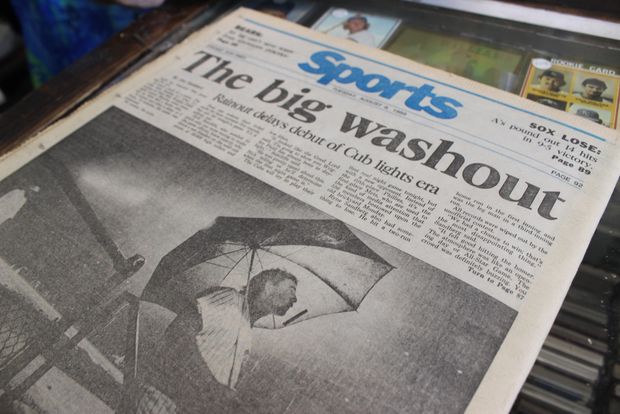 A Sun-Times edition from the first scheduled night game at Wrigley Field on Aug. 8, 1988. [DNAinfo/Ariel Cheung]

He will eagerly launch into a heartfelt monologue about Mae West or "one of our all-time heroes, Ernie Banks," or pull out a copy of the Sun-Times, marking the first scheduled night game at Wrigley Field. On one sunny afternoon, his blue-and-green Hawaiian shirt stands out boldly against the faded yellow newsprint and cardboard boxes behind him, and his voice is rusty but warm.

It's much easier to get Boyle to talk about anyone else's history than his own, but he shares a few details. He grew up on the Near West Side and became a Cubs fan as a teenager. He'd pass 1143 W. Addison St. on his way to Cubs games, barely noticing as it switched from a barber shop to a TV repair store.

Back then, autographs from players were free if you hung around the player's entrance and got lucky after a game. Over the years, his baseball card collection has grown to rival any enthusiast's.

He's got classic comic books and non-sports card collections for the Beatles and the Three Stooges, but his favorite items are the newspapers that served as a first draft of history. 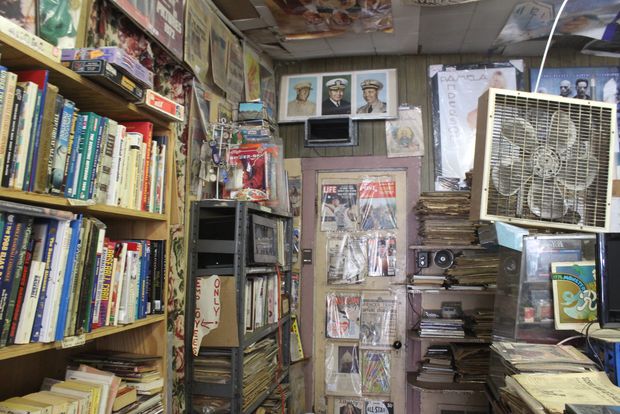 Years of collecting old newspapers and magazines have created a curiously curated sports and antiques shop in Wrigleyville. [DNAinfo/Ariel Cheung]

"Some of the young people say, 'I learned more coming in here than I did in school,'" Boyle recalled. "Now they have all their little devices, and they don't even need to go to the library anymore."

To flip through Boyle's boxes of posters or peek into the filing cabinets is to have a brush with greatness. Eddie Vedder and Jon Bon Jovi have walked away from the strange yellow shack with some choice items, as did a trio of soon-to-be movie stars just weeks before their blockbuster debuted in 1977.

"They saw this poster in the window, and I'd read an article about them, and I said, 'Are you Mark Hamill?' And he said yes," Boyle said. "Carrie Fisher was only 17 years old. She bought some things on her mother [Debbie Reynolds] and her father," Eddie Fisher.

But no matter who the customer is standing at the counter, Boyle gets the same satisfaction in helping them find something they'll treasure.

"It's the idea that even playing that record brings back the memory of who you were with and what you did when you were that age," Boyle said. "Nostalgia is a love of things from the past. In other words, it's almost like a time machine in many ways."