DUNNING — Annette Rosario and her son were both nervous heading into his first day of kindergarten Tuesday at Bridge Elementary School, 3800 N. New England Ave., Tuesday.

But a tour of his freshly-built classroom dialed back the anxiety — for her, at least.

"It had little tables and rugs and sofas, with a lot of bright colors," Rosario said. "It looked great, like it was really welcoming."

The room was one of eight new classrooms included in a $7 million module built behind the school over the summer, the latest release valve in an ongoing effort to ease the overcrowding at Far Northwest Side schools. 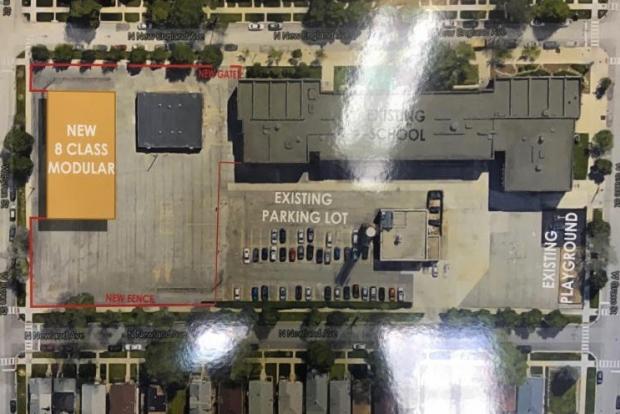 Bridge, whose main building is meant to accommodate 480 students, started the 2016-17 school year with 1,105 pupils, according to CPS data. Even with an existing four-classroom module and a satellite campus at St. Priscilla Church, 7001 W. Addison St., the school's utilization rate was around 136 percent last year, according to a CPS formula .

But the new module, now hosting all the school's kindergartners and preschoolers, freed up space for a new art and music room in the main building, Principal Chris Brake aIS.

Crews also knocked down a wall to expand the building's lunch room, adding two classrooms' worth of space, Brake said. Last year, parents had reported students having to eat their lunch in the hallways.

"Of course it's nice to have all that extra space, and it's greatly appreciated by the students and staff at Bridge," Brake told DNAinfo Wednesday. "There was a lot of work that went on this summer to provide more space and more resources."

Ald. Nicholas Sposato (38th) had long lobbied for money for the project, saying when the module was announced last year that it showed "the mayor and school district leaders are listening to my community."

But Mike Corey, whose son started fourth grade at Bridge on Tuesday, called the school's new module a "half measure" — especially as the city keeps asking taxpayers to step up, he said.

"It looks decent, but you still have more than 25 kids in these classes," Corey said. "For all they keep raising my taxes, they should be building new schools, not just some little mobile homes with wood panels," Corey said.

CPS leaders this year approved construction of a "middle-grades school" in the Read-Dunning area, set to open by fall 2019, as another bulwark against overcrowding. With a planned capacity of about 1,300 students, the building has kicked up a fierce debate over whether it should be an independent high school or a satellite campus for Taft High School, 6530 W. Bryn Mawr Ave, as the principal there has argued.