New Mural On 95th Street Will Be Unveiled At Farmers Market

Miller began working on the mural in July. It covers a 120-foot wall that faces a parking lot on the southeast corner of 95th Street and Longwood Drive in Beverly. This same lot also hosts Beverly's weekly farmers market.

Erin Healy Ross is the executive director of the 95th Street Beverly Hills Business Association, which coordinates the farmers market that takes over the lot from 7 a.m.-1 p.m. every Sunday for 26 weeks.

"We are really trying to make [the farmers market] a destination on Sunday mornings," Healy Ross said Tuesday. 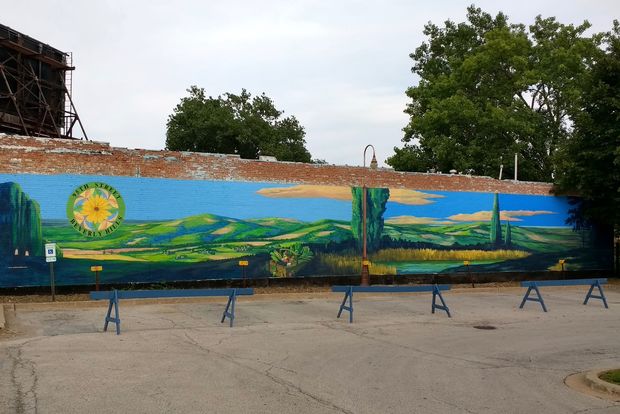 The sprawling mural at 95th Street and Longwood Drive faces a parking lot used to host the weekly 95th Street Farmers Market. The market is open from 7 a.m.-1 p.m. every Sunday for 26 weeks throughout the year. [Supplied Photo]

So she began working to add the new mural last year. Eventually, she partnered with the Beverly Arts Center, which will be part of the Chicago Architecture Biennial. This citywide showcase of architecture will include a look at the region's unique architecture and topography.

"It fit in perfectly with the theme of the show, which is 'Elevation,'" Miller said of her new mural.

Healy Ross successfully lobbied for the mural to be commissioned through the effort that kicks off Sept. 17 at the community art center at 2407 W. 111th St. in Morgan Park. The only adjustment in Miller's design came with the addition of several houses meant to reflect the neighborhood's residential architecture.

Included among the houses that look tiny on the massive mural is a painting of the Beverly Unitarian Church, known throughout the Far Southwest Side as The Castle.

Miller has worked as a commercial artists for some 30 years. She has recently painted movie sets for "The Exorcist" television series on Fox, an upcoming film starring John Goodman called "Captive State," and more. She moved to North Beverly two years ago. 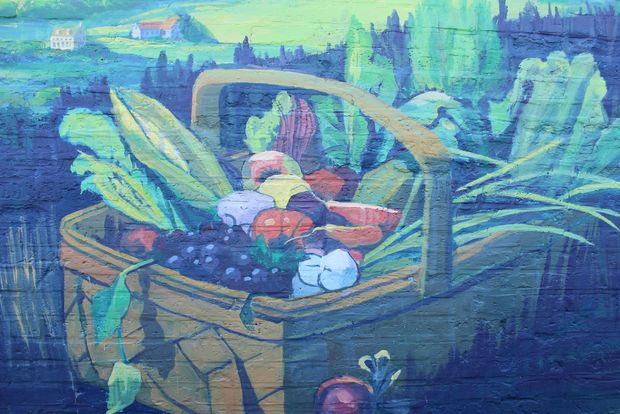 A basket overflowing with fruits and vegetables is a focal point of Elaine Miller's new mural at 95th Street and Longwood Drive in Beverly. [DNAinfo/Howard A. Ludwig]

The artist said she was drawn to the area in part by friendships she made with Sal Campbell and other members of the Beverly Area Arts Alliance. This group has worked to build a community of artists in the neighborhood and hosts the annual Beverly Art Walk, which will return Oct. 7.

It was Campbell that inspired Miller to design the mural in the style of a 1930s poster advertising vacation destinations throughout the Midwest. Campbell also pointed Miller in the direction of vintage images on fruit and vegetable crates.

The overall look of the mural borrows from those influences and also features a large basket overflowing with fruits and vegetables. The business association's logo is also prominently displayed as the sun in that's the source of light for the painting. 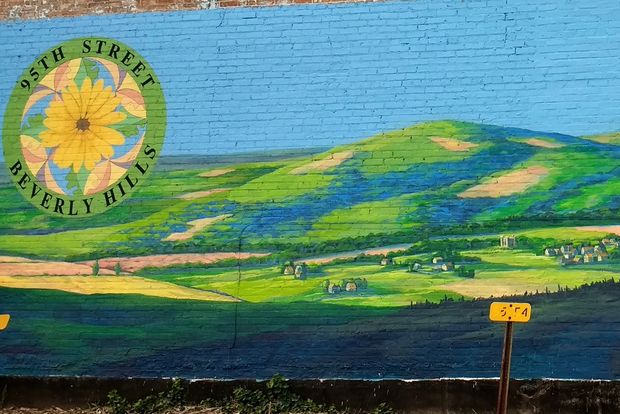 The logo for the 95th Street Beverly Hills Business Association is featured as the source of light in a new mural from artist Elaine Miller. The painting is meant to depict rolling hills of farmland and more. [Supplied Photo]

As the mural stretches south, the images take on a slightly darker hue. This is meant to depict twilight. There's also some marshland in the foreground and sand dunes in the distance. The rolling hills are a bit exaggerated but meant to somewhat reflect the hilly landscape of the neighborhood.

"People say it looks like California. But no, it is Beverly," Miller said.