By Howard Ludwig |&nbspAugust 25, 2017 6:01am
@howardaludwig
Twitter Facebook Email More
Davis McCarty's sculpture called "Quantum Me" will be placed on the north side of 99th Street, just west of the Metra depot in Beverly. The sculpture changes colors depending on where the viewer is standing.
View Full Caption
Supplied Illustration

BEVERLY — A sculpture that changes color based on the location of the viewer is coming to Beverly's quaint shopping district at 99th Street and Walden Parkway.

Artist Davis McCarty was hired to create the sculpture that will be placed on the north side of 99th Street, just west of the Metra depot. Organizers hope the installation is ready by Oct. 7 for the annual Beverly Art Walk.

Besides changing colors, the sculpture is to be placed in an area specifically designed to capture the morning sun. This light will then be recast in green, purple and amber colors creating a "kaleidoscopic effect" near the train station.

A Humboldt Park resident, McCarty relies on a special plexiglass originally developed for NASA, according to Ald. Matt O'Shea (19th). He announced the sculpture recently in his quarterly newsletter.

McCarty, 32, has also had his work on display at Burning Man — the festival/city that pops up out of the Nevada desert every summer for a single week.

Other venues include the Sears Tower, Union Station and music festivals around the country.

Half of the funding for the $16,000 sculpture in Beverly comes from the city's Department of Cultural Affairs and Special Events, which launched its "50x50 Neighborhood Arts Project" June 23.

This $1 million citywide effort is designed to bring sculptures, murals and public art installations to all 50 wards. The remaining funds will be pulled from O'Shea's dedicated infrastructure or "menu" funds for the 19th Ward.

McCarty was tapped for the project in Beverly as well as another in the 49th Ward. His project in Beverly is called "Quantum Me," according to O'Shea's newsletter. Renderings of the work are available in O'Shea's Beverly office at 10400 S. Western Ave.

Written feedback on Davis' 16½-foot design is welcome through Aug. 31. 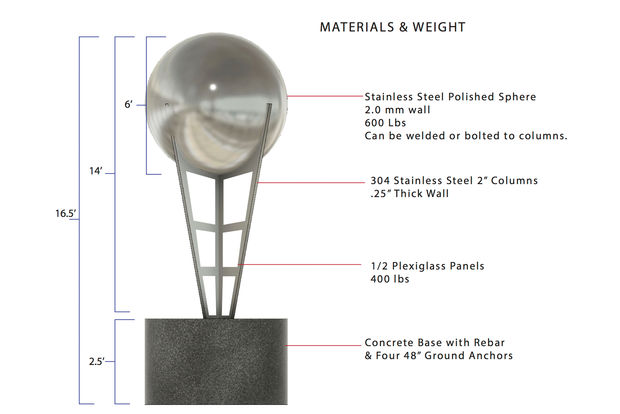 Artist Davis McCarty's "Quantum Me" relies on a special plexiglass originally developed for NASA. His work has also been on display at Burning Man — festival/city that pops up out of the Nevada desert every summer for a single week. [Supplied Illustration]

"Life gets serious. This sculpture helps remind us of the sense of discovery and excitement we felt as children exploring the world," said Davis, adding that the work's elaborate color scheme is also meant to represent the vibrant and diverse makeup of Beverly's residents.

The Beverly Area Arts Alliance, which coordinates the annual art walk, was also involved in the project. And an aldermanic staffer said the location of the sculpture was chosen, in part, to provide a boost for businesses nearby.

"I hope people will have a moment of joy and wonder as they pass by," Davis said.