Tennis Courts At Cosme Park Will Be Refinished

BEVERLY — The three tennis courts at Maggie Cosme Park in Beverly will be refinished this year, according to Ald. Matt O'Shea (19th).

The project is currently seeking bidders and is expected to cost $115,000, according to an official with the Chicago Park District. The work is expected to be completed before the end of the year.

O'Shea announced the improvements in his quarterly newsletter. He said Friday that the courts at 9201 S. Longwood Dr. are underutilized largely because they are in such bad shape.

"We look forward to increased usage of the newly refinished courts," O'Shea said in his newsletter.

Indeed, the tennis courts at Cosme Park were last resurfaced in 1978, the park district official said. Thus, O'Shea believes many tennis players living nearby have taken their game to Ridge Park, where the courts were redone in 2013.

But the tennis courts at Cosme Park will look the same as those at Ridge Park, according to the park district.

An asphalt overlay with same color coating and striping as Ridge Park will be installed over the existing surface. The posts and nets will also be replaced, the park district said.

In addition, a new trench drain is being installed around the perimeter to collect the standing water from the tennis court surface. The nearby drains will also be cleaned out, as all of the new surfaces will be sloped to the nearest catch basin.

One of the tennis courts at Cosme Park is getting striping for pickle ball too, according to the park district. 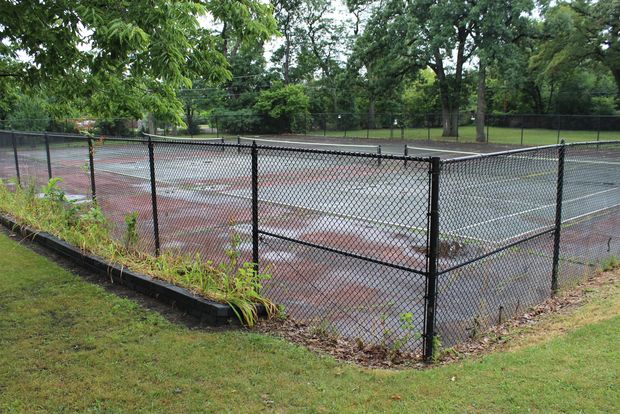 Three tennis courts at Cosme Park in Beverly will be resurfaced this year, according to Ald. Matt O'Shea (19th). He believes the condition of the courts have led to them being underutilized, but he also thinks tennis players will come back once they are redone. [DNAinfo/Howard A. Ludwig]

Only one tennis court will remain at the park at 11320 S. Western Ave. in Morgan Park. But O'Shea wasn't concerned by the loss, saying "there are plenty of courts throughout the neighborhood."

He urged tennis players at Kennedy Park to check out the new courts at Cosme Park, once complete, as well as the tennis courts at Beverly Park, Mount Greenwood Park, Ridge Park and elsewhere.

The Chicago Park District installed tennis courts at Cosme Park shortly after it took over the property in 1934. The park also contains a playground, baseball field and benches. It was originally named Longwood Park. 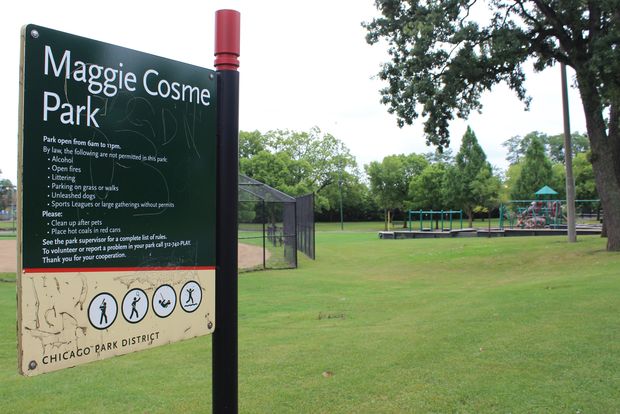 Besides three tennis courts, Cosme Park in Beverly also offers a playground and a baseball field. The park is named in honor of eight-year-old Maggie Cosme, who died May 18, 1989. [DNAinfo/Howard A. Ludwig]

The park was later renamed in honor of Maggie Cosme, who died May 18, 1989 as a result of a car accident in front of her home. The eight-year-old girl was in third grade at nearby Christ the King School.

Cosme's father, along with her grandfather, Luke Cosme, a longtime park district employee, helped build the park's baseball diamond in the 1980s. And "Little Maggie" played Little League there, according to the park district's website.