By Kelly Bauer |&nbspAugust 20, 2017 2:08pm | Updated on August 21, 2017 8:44am
@bauerjournalism
Twitter Facebook Email More
The Northwestern University professor charged with stabbing a man dozens of times confessed he did it with another man as part of a premeditated murder-sex-suicide fantasy they plotted in an online chatroom, prosecutors revealed Sunday.
View Full Caption
DNAinfo/Provided

COOK COUNTY CRIMINAL COURTHOUSE — The Northwestern University professor charged with stabbing a man dozens of times confessed he did it with another man as part of a premeditated murder-sex-suicide fantasy they plotted in an online chatroom, prosecutors revealed Sunday.

Wyndham Lathem — fired from the prestigious Evanston university after his role in the murder was alleged — plotted the grisly night with a British man, Andrew Warren, in an online chatroom for months before the slaying, prosecutors said during a bond court hearing Sunday.

"Wyndham, what are you doing?" Cornell-Duranleau asked after awaking during the attack, prosecutors said.

And prosecutors revealed there almost was another victim, but that person may not have showed up.

Appearing in court Sunday, the men were quiet while attorneys discussed the case. There did not appear to be anyone in support of them inside the courtroom, though an attorney for Lathem said 25 academics had submitted letters to Judge Adam Bourgeois on his behalf.

Lathem and Warren were ordered held without bond, with Bourgeois commenting that, "The heinous facts speak for themsleves."

Prosecutor talks about the slaying of Trenton Cornell. pic.twitter.com/HOqJve18BG

For months before the July 27 slaying, Lathem and Warren allegedly discussed killing a person and them killing themselves to complete a sexual fantasy they'd shared, Assistant State's Attorney Natosha Toller revealed Sunday. They decided they would kill someone and, afterward, Lathem would stab Warren to death while Warren shot Lathem, Toller said.

Lathem paid for Warren to fly to Chicago and put Warren up in a hotel, Toller said. Lathem eventually decided they'd kill his boyfriend, Cornell-Duranleau, Toller said, and Warren agreed.

Warren came over to the apartment and, after Lathem ensured Cornell-Duranleau was sleeping, Lathem joined Warren in a bathroom and they removed a new knife from its packaging, Toller said. Lathem asked Warren to record the slaying on a cellphone.

Lathem then returned to the bedroom and stabbed Cornell-Duranleau "over and over," Toller said.

Warren then hit Cornell-Duranleau with a "heavy metal lamp," Toller said, while Lathem continued to stab the younger man. Warren went to the kitchen and got two knives, which he brought back to the bedroom, Toller said.

Lathem and Warren used the knives to stab Cornell-Duranleau, with Warren using so much force he broke the blade of one knife, Toller said.

"Wyndham, what are you doing?" Cornell-Duranleau asked  — his last words, Toller said.

As Cornell-Duranleau bled to death, Lathem and Warren showered in the bathroom and cleaned themselves, Toller said. They had both cut themselves during the attack, prosecutors said.

At the library, Lathem called his doorman anonymously and said there had been a crime in his apartment, Toller said.

That's when police searched the apartment and found Cornell-Duranleau, who was dead, lying in his underwear on the floor, Toller said. They also found several knives and a broken lamp.

Cornell-Duranleau had been stabbed 70 times, was nearly decapitated and had several wounds that would have been mortal by themselves. He had "numerous" defensive wounds, Toller said.

Prosecutor says there was another potential victim. pic.twitter.com/6ZVPDesPKi

Cornell-Duranleau had "no idea" what was coming as he slept, Warren told police, according to prosecutors.

The two eventually traveled to California, where they learned there was a national search for them, prosecutors said. They contacted an attorney and negotiated with police to turn themselves in, which they did in separate places.

They were extradited to Chicago and arrived over the weekend before being charged with murder.

An attorney for Lathem asked the public not to rush to his judge his client during a news conference after Bond Court on Sunday.

Lathem, a well-published microbiologist, began teaching at Northwestern University in north suburban Evanston in 2007. He was fired from the prestigious school Aug. 4 "for the act of fleeing from police when there was an arrest warrant out for him."

Warren, meanwhile, worked as a senior treasury assistant at Oxford University in Great Britain, according to the school's website. His sister reported him missing days before the murder. 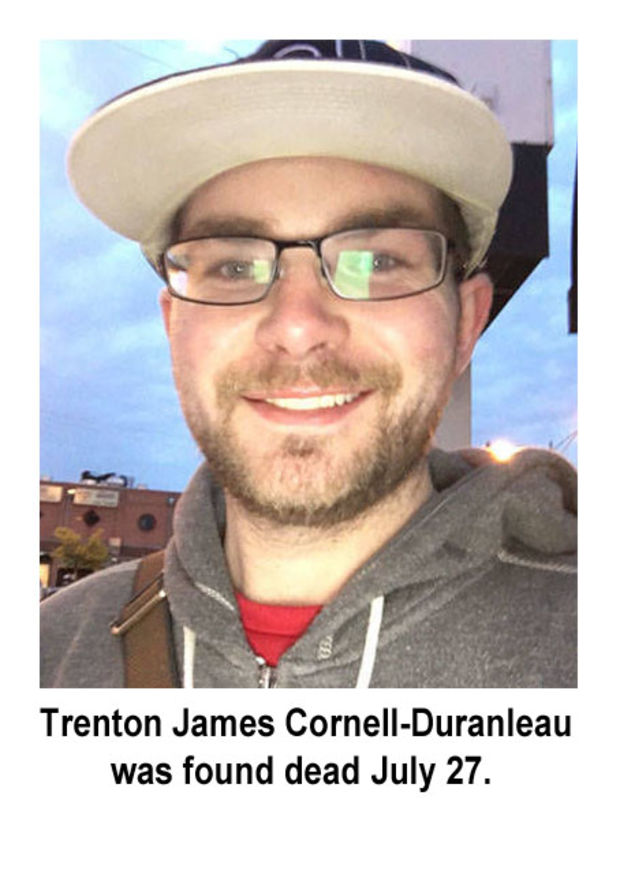 "The victim's body had been stabbed several times ... to the point of mutilation," Guglielmi said. "This was an attack that had a great deal of rage or passion, and the victim was brutally murdered."

Guglielmi said that the day after the slaying, Lathem and Warren went to the Lake Geneva Public Library in Wisconsin and donated $1,000 in Cornell-Duranleau's name. There is no known connection between the library and Lathem, Warren or Cornell-Duranleau.

Cornell-Duranleau, a native of Corunna, Mich., worked as a hairstylist after earning his cosmetology license in Holland, Mich., according to an obituary posted by his family.