Twitter Facebook Email More
A new street hockey rink will be built in Kennedy Park on the Far Southwest Side, according to 19th Ward Ald. Matt O'Shea. The rink will be built on the southeast corner of the park at 11320 S. Western Ave.
View Full Caption
Supplied Illustration

MORGAN PARK — A street hockey rink is coming to Kennedy Park courtesy of the Chicago Blackhawks and the Chicago Park District, according to 19th Ward Ald. Matt O'Shea.

Construction of the outdoor rink at 11320 S. Western Ave. in Morgan Park will begin next month, a Park District official said.

One tennis court will remain in Kennedy Park on the southeast corner of the park, said O'Shea, adding the new rink will be enclosed with traditional-size hockey sideboards and netting will be used to keep a ball or puck in play.

The rink measuring 80 by 175 feet is expected to open in the fall, just a few months ahead of a new ice rink the Blackhawks are building near the United Center, O'Shea said.

"I am very excited. I am excited that the Chicago Blackhawks will be investing in our community. It is no secret that the Blackhawks have a tremendous following on the South Side," O'Shea said Friday.

He said Kennedy Park's new street hockey rink is being paid for by the National Hockey League’s Industry Growth Fund. Money for this initiative is meant to develop youth hockey and is allocated through the league's collective bargaining agreement. 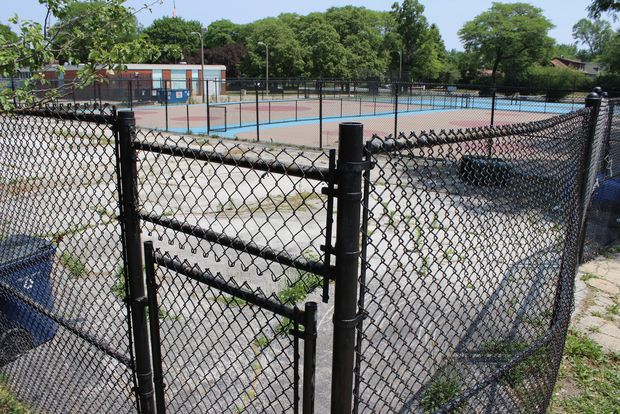 This fenced-in storage area as well as a pair of smaller street hockey courts and a tennis court will be removed to make way for a new, larger street hockey rink at Kennedy Park, according to 19th Ward Ald. Matt O'Shea. [DNAinfo/Howard A. Ludwig]

A private meeting to discuss the new rink that will feature a SportCourt playing surface designed for roller blades was held in June with several residents who live near Kennedy Park.

According to someone who attended the meeting, the Blackhawks proposed the South Side rink after it was announced that a similar facility was being built in Edison Park on the North Side.

Blackhawks CEO John McDonough was raised in Edison Park and credited the neighborhood with his success when he brought the Stanley Cup to Northwest Highway and Ottowa Avenue after the team's championship victory in 2015.

This street hockey rink announced May 8 for Brooks Park at 7100 N. Harlem Ave. has not yet broken ground, but 41st Ward Ald. Anthony Napolitano said earlier this month that the project is moving forward.

As for the new rink coming to Kennedy Park, O'Shea is keeping his fingers crossed that a Blackhawks player might come out to cut the ribbon and offer a few tips to the many young hockey players in the area.

He's also hoping that the youth hockey clubs that use the nearby Morgan Park Sports Center also find ways to use the street hockey rink to their advantage.

"I'd certainly like to see what the Horned Frogs or St. Jude do to utilize it from time to time for off-ice training," O'Shea said.